Your SO OF COURSE preview of WWE TLC 2018

Your SO OF COURSE preview of WWE SURVIVOR SERIES 2018

WWE’s annual non-canon Injustice-PPV, Survivor Series. A show that once had all the prestige of SummerSlam and the Royal Rumble but nowadays is reduced to a Simpsons punchline…

So I says, blue M&M, red M&M… they all wind up the same color in the end. pic.twitter.com/fAtds8XUuF

It’s December, the month where the NFL’s season is at a critical juncture, families are traveling for the holidays, there are festive shows to watch, festive movies to rewatch, house parties to host. There’s not a lot of time for WWE, and the recent ratings have indicated as such: Raw has hit a slump unlike any other, with the show posting record-low viewership numbers. Smackdown’s ratings are comparatively better, with the Blue Brand holding a better number (compared to prior months) than Monday Night Blaw.

This is one time I’ll say I’m thankful for the brand-combined PPVs because Raw is basically a corpse and Smackdown’s storylines are carrying the company through the winter months. In an odd palate-swap kind of way, everything on the blue side is hot, while the red show is ice cold. Excited? Well too bad; here’s a PPV anyway, now featuring things to hit with, fall from, and fall onto.

THIS is your SO OF COURSE preview of WWE TABLES, LADDERS AND PLEASE DON’T HIT BECKY’S FACE WITH ANY 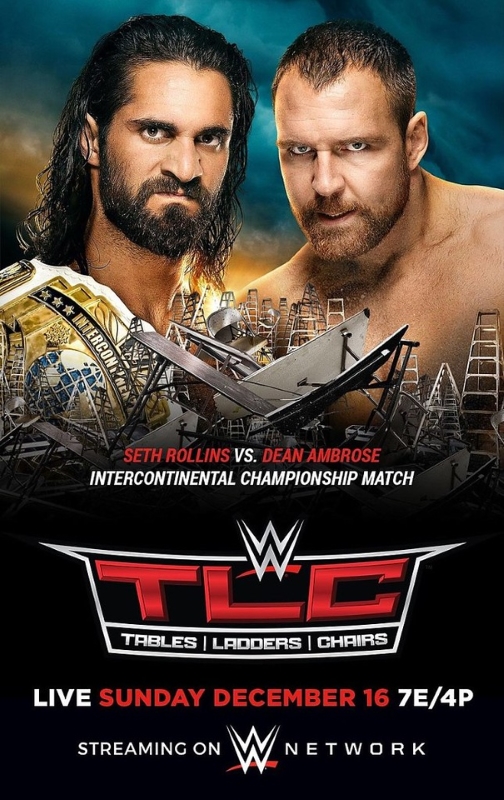 Holy cow there’s a literal dozen matches on this card. What year is this? 1998? I know Becky Lynch is the next Stone Cold but let’s not lose our heads here. I’m not going to preview all of these since a few are certainly going to end up on the preshow. Let’s just consider the ones that matter (of which there are maybe four) and rest of the ones WWE thinks matter..

What it is: It’s the Irish guy that was poised for greatness before an untimely injury ruined his push and cost him the Universal Championship…verses the Scottish guy that has looked the part for ten years but keeps failing to be anything more than mediocre when he finally gets the ball to run with. Sorry for being cynical but Drew was the worst NXT champion and since that show is just about the only thing WWE has done right with any consistency for the past 15 years, I’d say that’s a good barometer. Lots of NXT champs fail in WWE, but if Drew can’t even make it as champ in the much safer environment at NXT, I don’t see him working longterm as the next big champ to dethrone Lesnar. Nevertheless, he’ll get his shot, which means he’ll beat Finn at TLC.

What it should be: I dunno. Finn needs to (A) turn heel and (B) jump to Smackdown, but since WWE needs babyfaces and Raw needs all the help it can get, he’s stuck where he is. This match should be a Finn Balor win vs a babyface on his way to riding his heel stable to the top of the card, but that would require living in a different universe, so nevermind. It should be anything other than Finn getting squashed since he has more longterm value to WWE than Drew McIntyre.

What it should be: Elias hitting Lashley over the head with his guitar and winning within thirty seconds. I know it’s a ladder match and I know WWE wrestlers suddenly become turtles in the mud when they touch the rails on those ladders, but still: thirty seconds, in and out.

What it should be: I guess that. This feud is fine. It would be better if Dean was Universal Champ and Seth was chasing the gold but ha ha ha what is that? Normal booking? Don’t be silly. Seth will probably pick up the win to continue having momentum heading into the Road to WrestleMania and a possible showdown with Brock Lesnar.

What it is: A guy who has never been over vs a guy who used to be so over it was shocking but now is so meh with audiences it’s only shocking how quickly WWE was able to cool him off.

What it should be: This match has stakes: If Braun wins he is #1 Contender to Brock’s title at the Rumble. If Corbin wins, he becomes full-time General Manager of Raw. So what if Braun wins, does Corbin get fired? No. If Corbin wins what happens to Braun? Nothing; he enters the Rumble as the second-most favored competitor. So there are stakes, but they’re not fully developed. Strowman winning offers more storyline possibility. No one cares about Baron Corbin and it continues to amaze me how he somehow went from midcard nothingburger to one of the most important people on the show in the span of a calendar year. Braun needs this win because (1) he needs momentum to get back to being as hot as he was six months ago, and (2) Brock needs a challenger. It makes too much sense.

What it should be: I’ve been waiting for a classic UFC-style Ronda Rousey quick-win. Just ring the bell, have Nia charge at her like a mentally challenged rhinoceros, catch, flip, armbar, taptaptap, ring the bell. Time elapsed: thirteen seconds. The fans—who don’t despise Nia because she’s an effective heel but because she’s bad at her job and is being rewarded for it—would go bananas. Ronda—who has slipped a bit and is suffering the (very normal and expected and fine) growing pains that come with being a rookie cutting live promos—would get some mojo back too. It’s win-win for everyone.

THE BAR vs THE NEW DAY vs THE USOS

What it is: Not a TLC match in the vein of the old Hardyz-Edge & Christian-Dudley Boyz matches.

What it should be: A TLC match in the vein of the old Hardyz-Edge & Christian-Dudley Boyz matches. It’s just a triple threat tag match, but then again, the WrestleMania 2000 match was just a “triangle ladder match” that ended up featuring crazy table spots. Triple threat rules means no dq so yeah, go nuts boys. The Smackdown tag scene is terribly shallow but also really fun so this should be great as long as Big Show doesn’t oh crap I just gave Vince an idea.

What it should be: Ten minutes of nostalgia on a B-PPV? I’ll take that I guess. Both guys can still go and it’s not like they have anything better to do. Rey is lean and fast while Randy is always great as (A) a heel that (B) is out of the title picture, just hanging out in the upper-midcard, not having to carry the company or do anything taxing.

What it is: The continued awesomeness of heel champ Daniel Bryan vs AJ “I can’t have a bad match with anyone; I keep trying and they all end up equally very good but not great” Styles.

What it should be: Another very good match, maybe even a great one. That would require them to be given time and for a proper finish to be in place. Unfortunately, with the champ being a heel and the challenger being a top babyface star, we’re not likely to get a clean finish, but there are still ways to have clever “dirty” finishes. Just avoid doing anything cheap and both guys can walk away from the feud, ready for the Rumble and the Road to WrestleMania, as strong as ever.

What it is: The main-event. Three awesome performers, in the best feud going right now, with the hottest star in the company in the middle.

What it should be: Dynamite. Any combination of these three ladies are capable of blowing the roof off the place. Put the three of them together, give them time to work, and only magic can follow. The worst thing WWE could do would be to cheapen the match with an overbooked finish, or a cheap run-in, or anything that takes away from the match. Of all the contests on the card, this one demands purity. Just let them wrestle, book a clean finish and end the show properly.