Your SO OF COURSE preview of WWE TLC 2017

Last time on SO OF COURSE it was WWE’s annual Hell in a Cell spectacular, featuring the overdone gimmick match originally meant to be a blood-soaked “feud-ender” but now is just a PG-rated brawl inside a large, roofed cage. The show was fine I guess.

With Smackdown’s October event in the books it’s time for Raw to offer up it’s pre-Survivor Series helping. TLC has been bumped up from its usual Christmastime spot (Clash of Champions moves to December) to Halloweentime, although Halloween Havoc is just sitting there begging to be used…Whatever, consider this your SO OF COURSE preview of WWE: THE SHIELD REUNITING IS FOR REAL NOT A TOTAL LAZY CONTRIVANCE WHILE RAW STRUGGLES AGAINST THE FALL TV SCHEDULE.

It looks like a rather light show with a couple big happenings propping it up. Let’s look at the card and see how Vince can screw it up… 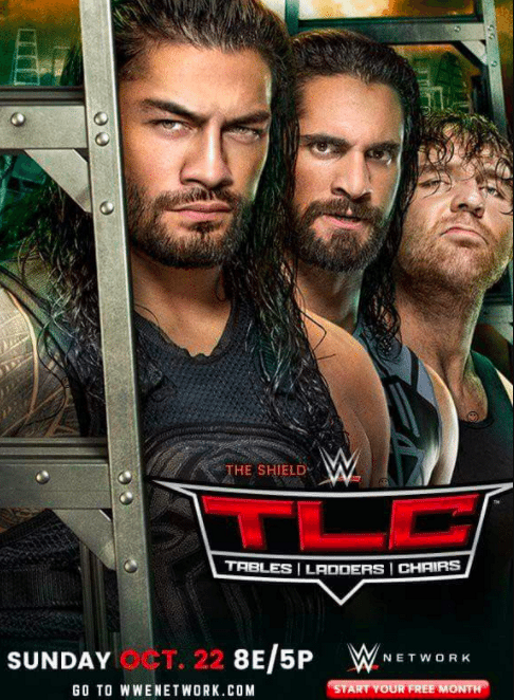 What it should be: Asuka and Emma scraping for ten minutes with a few near-falls making you think Emma might pull off the upset…before Asuka breaks her in half and wins.

What it is: The Beginning of the post-Neville era in the Cruiserweight Division. To be fair, we should have been in such an era already, but WWE insisted on keeping Neville on the purple show, slumming it with the other tiny dancers, instead of pushing him as an IC title contender like he should have been. Enzo has proved himself more than capable as the new face of the division, despite having the wrestling ability of Abraham Lincoln (he was a wrestler…but he’s also currently dead so his skills are rather limited). Kalisto was called up from the depths of nothingness to replace Neville and here we are: A match between an eager luchador who has never carried a match in his life vs an eager promo guy with a tendency to screw up even the most basic moves.

What it should be: A disaster; a five-minute fiasco with all the smoke and mirrors and bells and whistles the carnies in WWE can come up with. Let’s just hope no one breaks anything.

THE DEMON vs SISTER ABIGAIL

What it is: The Demonic version of David S. Pumpkins vs Bray Wyatt cosplaying as the girl from The Ring if she grew up and became a sad out of work former star clinging to faded fame and selling autographs on the convention circuit in front of a sign saying “The girl from The Ring; movie star.” Also Bray has viral meningitis so literally the only other match anyone cares about on this show is in danger of either being cancelled or significantly cut short.

What it should be: The end of this feud. Please.

What it is: A showcase women’s match between a legend who’s never lost it and arguably the most “total package” performer in the division. Granted, the storyline—focusing on Mickie James’ age (she’s thirty-seven, she’s not old)—has been a disappointment, but Alexa is so good at the little things she can sell me on anything. Give these ladies time to work and they can put on the sleeper showcase of the night.

What it should be: A hard fart victory for Alexa Bliss on her way to getting Mortal Kombat Finishered by Asuka, perhaps as early as Survivor Series, but more likely either at the Royal Rumble or WrestleMania.

TLC MATCH: THE SHIELD vs BRAUN STROWMAN AND FOUR GOOBERS

What it is: It’s The Shield back from the dead. Sure it’s a ploy to prop up Roman Reigns (who can’t seem to get wide-spread applause unless two other guys in tactical vests are flanking him) and will probably end in an anti-climactic way, causing everyone currently excited about it say “that’s it?” or “I hate this company” at least twice. But let’s ride the wave for as long as we can; The Shield is back baby! Their opponents are a whopping five-man team, just to hammer home how unstoppable the black-garbed trio was in their heyday (they beat Evolution three straight times after all and only lost one big match together…and that was during a period of inter-squad bickering). The Miz is the defacto leader of the opposition, having enlisted Cesaro and Sheamus to his cause. After that Braun Strowman joined the fun, and then—unexpectedly—wannabe Mayor Glen Jacobs (aka Kane) returned to WWE, in between campaign commercials and meet-and-greets I suppose, to add himself to the mix. This is a TLC match without any title on the line so it’s hard to imagine what use the ladders will be. Also it’s not under “tables match” rules so I dunno what they’re going to do with all the tables that will be lining the arena. I’m good with the chairs though: This is pro graps; getting hit with a chair is just part of the show.

What it should be: A car crash match with bodies flying everywhere, tables on top of tables with chairs on that and people jumping off of ladders and crashing through those tables and chairs. Pure anarchy. That’s what I want. This match has a terrible “storyline” behind it. Everything for the past few weeks has been blunt and obvious deck-arranging just to get us to this point. But again: The Shield is back, so who’s complaining? Let them have their win and a nice little run until the Royal Rumble and then they can amicably go their separate wa—

Think you can predict the outcome of each event?
Join TWO’s WWE Prediction League for your chance to win cash!