When WWE decided that their PPVs (or, at the very least, most of them) would be named after specific match stipulations, pretty much the entire internet wrestling community groaned a sigh of painful discontent. 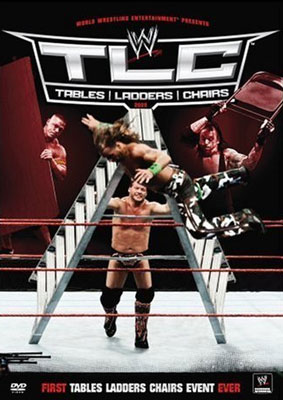 Now, having an event named after a match type hadn’t done theRoyal Rumble PPV any harm and, when you look at it logically, changing No Way Out to Elimination Chamber isn’t too bad in the grand scheme of things (after all, the Chamber matches have been a February tradition for a few years now and were already established at that event), but when Hell in a Cell was announced, and then when it was revealed that there would the THREE matches contested inside the structure, those groans seemed more justified.

The show itself only compounded the apparent mistake WWE had made, but Vince McMahon is nothing if not stubborn, so now we have a PPV based around the concept of the TLC Match. Where this differed from the aforementioned HiaC debacle, though, was that there would only be one bout contested under the eponymous stipulation. Rather, the undercard would build and tease what we would be in for during the main event by having three matches fought using only one aspect of a TLC Match.

Did this work? Ask Meatloaf and he’ll tell you.*

The first ever TLC match officially took place at Summerslam 2000 (although you could argue that the Three-Way Ladder Match at WrestleMania 2000 was a TLC Match in all but name) and was contested by Edge & Christian, The Hardy Boyz and The Dudley Boyz. The second (and some would say the pinnacle of the) TLC Match was held at WrestleMania X-Seven, again featuring the same three teams and, over the years, it  evolved to include other wrestlers and, eventually, became a staple of singles competition rather than tag-team bouts, with Edge being the wrestler credited as the master of the stipulation (even going so far as to have him be pushed as undefeated in TLC matches, despite not winning TLC III).

Surprisingly, before this PPV, there had only ever been eight official TLC matches since it was introduced.

Since the first TLC match, every one of the subsequent bouts have featured at least one wrestler who had competed in one before and the 9th would be no different. Every one of the previous eight had been great matches, so the big question was whether that run would continue.

Before we get to that, there’s the small matter of the rest of the card. Starting off with a fantastic Ladder Match for the ECW Championship was a smart move, as Christian and Shelton Benjamin meshed together perfectly and put on a stunning battle. The build for this was interesting because WWE actually acknowledged the complaints that the ECW Title was being overlooked when it came to PPVs. Christian challenged Shelton on an episode of ECW on SyFy, daring Benjamin to face him, show the world that ECW matters and “steal the show.” They didn’t quite manage the last part, but they did come damn close.

Big jumps, dangerous falls, blood (and kudos to Matt Striker for covering Christian getting his wounds treated by claiming it was a Texas State Athletic Commission ruling, taking the heat away from WWE… but a metaphorical kick in the nuts to Jerry Lawler for killing that cover story within three seconds by mentioning it’s actually WWE’s rule) and a stunning finish, all add up to a high-octane opener that got the fans into the show from the off. It’s also interesting to note that, outside the main event, this was the longest match on the card.

Of the two remaining matches featuring weapons from the TLC main event, the Tables Match between Sheamus and John Cena works better with the stipulation it’s fought under. The Irishman does look out of his depth against Cena, but not overly so and he does grow into it as the match progresses. A truly stunning ending makes sure this bout would be talked about for a long time after the final bell.

The main problem for the Chair Match between Undertaker and Batista was that the chair doesn’t have the same impact as ladders or tables and also doesn’t afford the wrestlers the same number of options when it comes to using said weapon. The other issue was that this match had an extra stipulation where the chair was the only illegality allowed (neither the Tables, Ladder or TLC matches had this proviso). It pretty much rendered the stipulation redundant. Our saving grace? It was Undertaker v Batista, two guys who, for me, have never had a bad match against the other. An added bonus was that this had Batista as a heel, the role he was born to play. Clubbing blows, power moves and counters were the order of the day and the match is really good… if only the finish lived up to the rest of the contest.

Also on the card, there were three non-gimmick matches, two of them being title bouts. The first of these was for the WWE Intercontinental Championship, with Drew McIntyre challenging John Morrison for the premier midcard title in the company (perhaps all of pro-wrestling). The match itself is good, with some of the exchanges being really good. Highlights are a tilt-a-whirl DDT on Drew by Morrison, an inverted Alabamaslam on Morrison by Drew and the ScotDrop DDT used to end the match. I’m genuinely excited to see how Drew develops from here, due to our professional friendship that goes back years. Oh, and McIntyre gets a nice little rub from Vince McMahon himself immediately after this match ends.

The other title bout is for the WWE Women’s Championship. Unfortunately for both wrestlers, nothing they could do in the ring could erase the stench of the disgusting “Piggie James” angle leading into it. That being said, the match itself wasn’t that bad, but the finish was terrible.

The only straightforward match on the card was between Kofi Kingston, who had been on an unbelievably hot streak since before Survivor Series, and Randy Orton, a man who the fans were itching to cheer. They put on a really good match, with some great sequences (a triple-jump crossbody to the floor being countered by an Orton dropkick is the highlight, with a successful crossbody from Kofi and Orton’s suspended DDT close behind) and the fans were into it in a big way, but I can’t help but feel that, despite the well worked finish, the wrong man won.

Lastly, we have the actual Tables, Ladders & Chairs Match between the surprise package of 2009, JeriShow, and DX. This was a fitting end to a surprisingly good PPV, with all four guys working their boots off and creating some new Ladder Match spots, coming up with yet another way to get the Punch of Doom in and finishing off with a truly innovative ending. The action flows incredibly well throughout and the legacy of the TLC Match was kept intact.

Only one extra on the collection, which is a shame considering WWE could’ve had a history of the TLC Match and brought newer fans up to speed on why it’s such an exciting concept. As it is, the bonus we do get is similar to one on the previous month’s Survivor Series DVD; Shawn Michaels and Triple H from after the show went off the air.

The difference here is that TLC took place in San Antonio, Texas, HBK’s home town, so the celebrations are a little bit more personal. There’s not commentary and minimal dialogue, but I do enjoy seeing the wrestlers interact with fans after the cameras stop rolling (so to speak). You really get to see that DX are genuine friends by the way they interact with each other and it’s a nice little extra. It’s just a pity there’s nothing more substantial to compliment it.

WWE TLC is a much better event than I thought it would be going in. With the stink of Hell in a Cell still fresh in our minds, the fact there was only one actual match fought under the main stipulation helped a great deal. Only Mickie James v Michelle McCool lets the side down, although it’s not that bad, with the remainder of the card ranging from good to great.

My main gripe about the entire event is to do with Teddy Long. I can understand him coming out to reverse the original decision in the Batista/Undertaker match. With the chair being the only thing legal outside a normal wrestling match, Batista hitting his opponent with a low blow before the chair is technically a disqualification. What annoys me is that the finish to the Intercontinental Championship Match is the EXACT same. Drew pokes a thumb in Morrison’s eye (an illegal manoeuvre) before hitting his finisher, so why didn’t Teddy Long, who should’ve been watching it in the back, come out and reverse this decision?

I know it’s a small, trivial matter, but the inconsistency annoyed me a great deal.

Apart from that, this DVD is well worth the money and being able to pick it up for around £10 elevates it to almost must-buy status.