REVIEW: BOHEMIAN RHAPSODY almost works in spite of itself

Queen is an interesting band in history. They sold out massive crowds, did huge stadium shows and sold millions of records, but the press hated them every step of the way. No matter what they did there was always this massive chasm between what critics said about them and what people loved about them. It wasn’t until Freddie died that they finally started getting respect, though their fans have always been with them. It’s maybe fitting then to see that divide back again, with critics mostly hating their official biopic film and Queen fans raving about it.

I’m more in the middle. As a fan of the music, I love the musical moments. As a fan of movies, I was terribly underwhelmed by the rest of the film and at times angry at some of the changes made to the actual history. 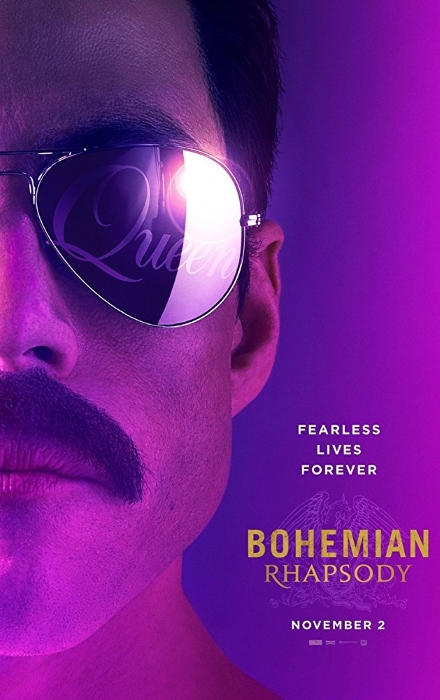 If you know nothing about Queen but a few of their hits you will probably walk out of Bohemian Rhapsody entertained but not particularly moved. It’s a fine enough movie for a casual watcher, nothing remarkable but nothing terribly incompetent. On the other hand, the whole thing felt stale and safe, moving from moment to moment without any real sense of urgency or excitement. But for a few flashes of greatness, it was mostly just there, serviceable and perfunctory.

It is the John Deacon of Queen movies.

But if you’re a hardcore Queen fan you probably have criticisms, particularly for the historical inaccuracies, of which there were a ton. They break down into two different categories for me…

On the one hand are the simple timeline mixups, like Queen developing We Will Rock You far later than actually happened, and Fat Bottomed Girls coming years before it was recorded.

On the other side are the changes that actually affect the “story” of the band; their history. In that case, the biggest sin of the movie was making Freddie the villain of the band during the middle act. 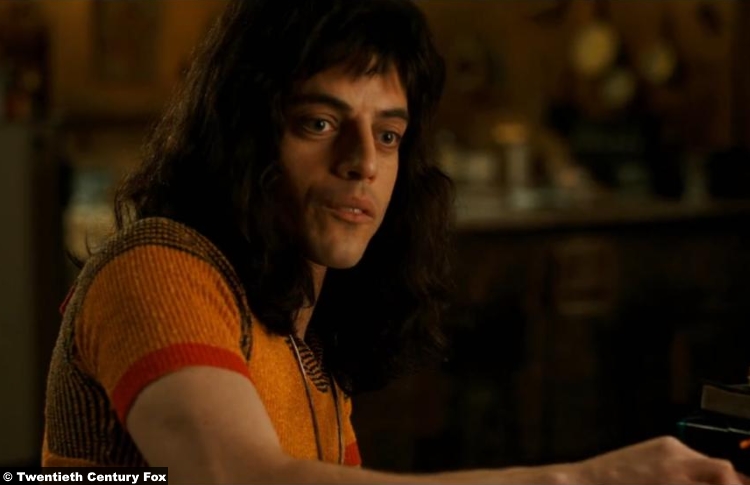 According to the movie, Freddie got swept up by Paul Prenter and decided to go solo, leaving the rest of the band to go without him. After coming to his senses he returns to the group and begs them to take him back and let him record with them again. They do and this coincides with LIVE AID and the band’s miraculous “comeback.”

Queen never stopped recording. They recorded together from the time they formed to the day Freddie died (and beyond, with the surviving trio recording a swan song album with some old Freddie recordings). Yes, Freddie released a solo album but so did the rest of them…BEFORE Freddie.

And then there’s Mercury’s personal life. The movie would have us believe that Freddie was a wild drug and sex-addicted hedonist. And of course, he absolutely was…but so was the rest of them.

Brian May was arguably more sex-addicted than Freddie. The man wrote Fat Bottomed Girls from personal experience for crying out loud. But in the movie, the trio are all family men who don’t have time for Freddie’s partying ways. 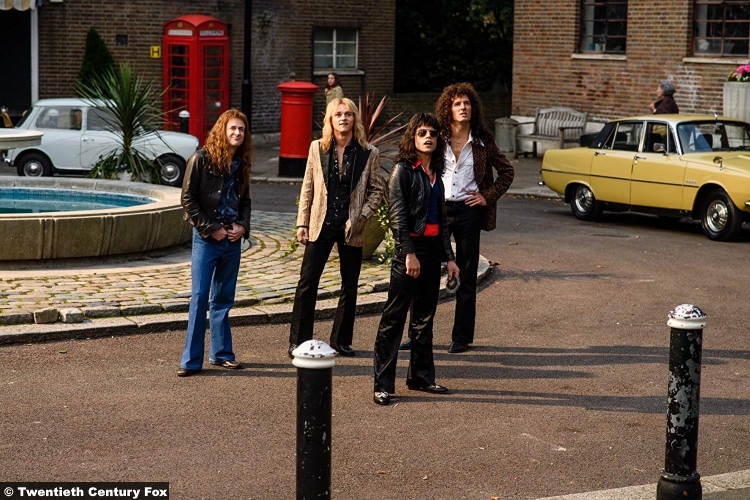 And it’s fine if the movie wants to take liberties. It’s a film, not a documentary. But in that case, let’s not call it a “biopic.” The bio(graphy) part has been cast aside in order to concoct a narrative that the writer and surviving band members thought would be more cinematic.

And therein lies my biggest problem. The movie was made without Freddie’s input, obviously. John Deacon has been retired for twenty-five years (not coincidentally he’s the butt of many of the film’s best jokes) and Freddie’s been dead for almost thirty.

Brian and Roger carry on, however, and they were the creative gurus on the film. Not coincidentally, they come off the best. Roger is witty and Brian is measured, meanwhile Deacon’s a dork and Freddie a self-destructive time bomb. It just rubs me the wrong way that Freddie wasn’t there to say “hey that’s not how it went down…” 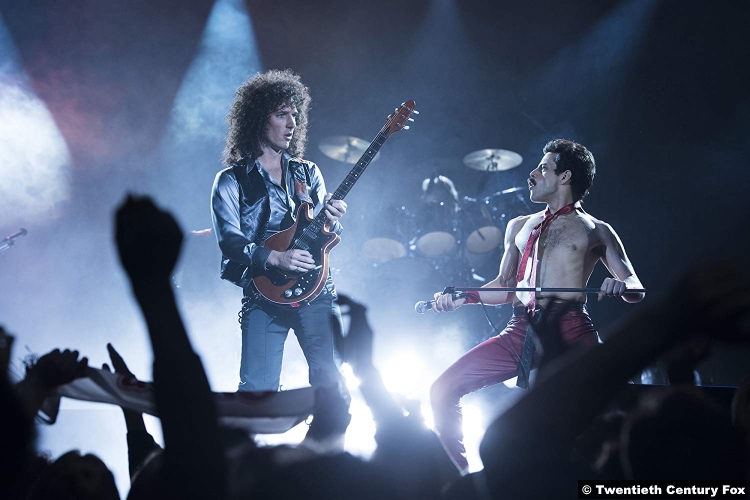 For a band that, in their final years, decided to credit themselves as a group on all their songs, it’s sad to see such a slanted view on screen, slanted in favor of two of the four.

But the music is great, I can’t deny it.

Probably the greatest decision made in the development of the movie was to build around LIVE AID. The concert is legendary in Queen’s history: The charity event starring a who’s-who of musical talent was largely knocked-off by the performers, many of whom showed up either drunk, high, hung over, or all three. Queen put their heart and soul into it, however, and their anthemy, sing-along hits were the perfect venue for the band that had performed in huge stadiums over the years.

Bravo to those final twenty-minutes. It’s worth the price of admission to experience that in a theater. 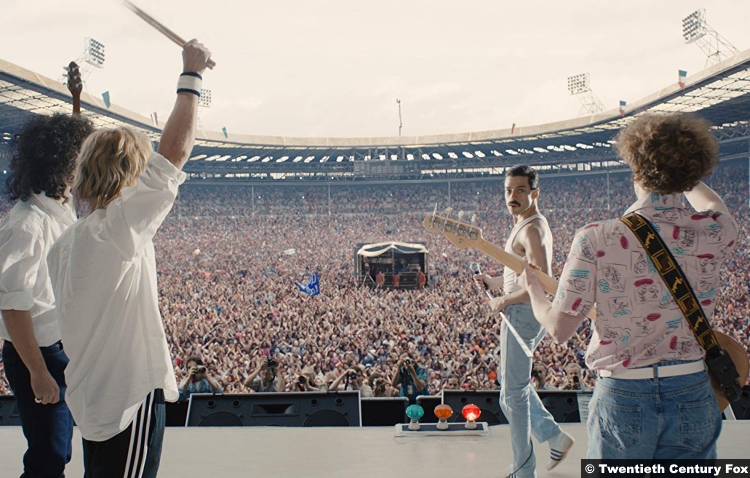 As to the direction, Brian Singer was infamously fired for failing to show up to work(!) but his name is kept on the credits due to DGA regulations. Despite not finishing the movie, the film retains his fingerprints. There are flashes of cleverness—a cutesy angle or an interesting camera trick—that stick out from the sea of blandness. There’s little else to say about it.

From a filmmaking standpoint, I’m far more intrigued by the Elton John movie, ROCKETMAN, coming next year. That looks like the anti-biopic, mixing in elements of fantasy and the surreal. The music should be great too; like Queen, Elton John has a great catalogue of hits to pull from and a wild ride of a life to put on screen.

I just hope they don’t turn him into a villain in his own movie the way this one did.

7/10 – Whenever the band is singing, the movie works. The rest of the time it just feels like work.