Living just five years shy of a century is a remarkable feat. Anyone who can endure a Great Depression and a World War and come out the other side with another sixty years of life to spare is someone who had things figured out. Death comes to us all, however, whether suddenly, shortly, or eventually, and now—one month shy of his ninty-sixth birthday—it has claimed the life of Stanley M. Lieber. But you know him by another name: 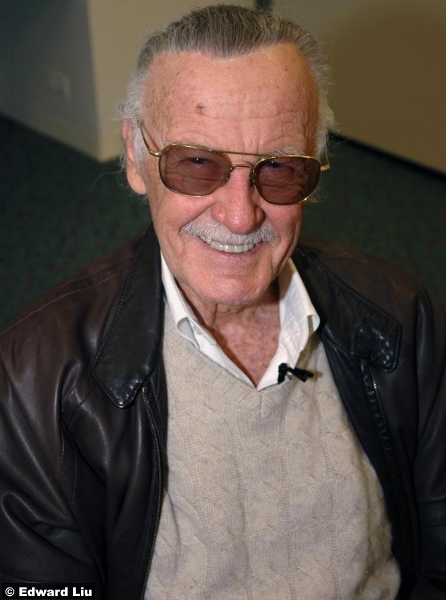 His impact is going to be extremely challenging to boil down to a thousand-word article, though every relevant publication and news outlet is going to try. They’re mostly going to focus on him as a superhero-designer, though, and that doesn’t do him enough justice. Yes he created superheroes like Michael Scott created Paper Company names, but there was so much more to Lee than that. His legacy is more than just the words “creator of Spider-Man” or “creator of Fantastic Four” etc, printed under pictures of his name. What he accomplished is so much more significant than just words on pulp.

Lee didn’t just influence comics; he helped shape the modern culture. Imagine leaving such an impression on, not just one generation, but several generations, that, by the time you die, the whole culture around you has partially been defined by you. So-called “nerd culture” rules the entertainment roost nowadays and Stan Lee is arguably that culture’s greatest architect and advocate. It wasn’t an instant-happening, either. For a long time Lee was known only to a small subset of society and his creations were enjoyed only by that same small subset. Somewhere along the way (a decade ago, actually) a light-switch was flipped and suddenly everyone and their brother was a fan, everyone knew his name, knew his face, and loved his creations.

As a bonus, the fact that Stan Lee accomplished so much while remaining so humble and genuine is remarkable (and sadly, very rare).

Stanley Lieber was born in Manhattan to Jewish-Romanian parents. The son of a housewife mother and a tailor father, Lieber and his family lived in a cramped apartment during the Great Depression, with he and his brother sleeping in the residence’s lone bed while his parents shared a fold-out couch. When not working after-school jobs (writing obituaries), he immersed himself in books and movies, falling in love with the heroic deeds of characters like Robin Hood and The Shadow.

At the close of the 1930’s, the almost-seventeen Lieber was already a high school graduate and was looking for a job in entertainment. Timely Comics in New York was, at the time, owned by Martin Goodman, who just happened to be Lieber’s cousin (in-law). Goodman hired Leiber to work under Timely’s editor-in-chief Joe Simon (creator of Captain America along with Jack Kirby). Initially his work was mundane as he fetched coffee, re-filled inkwells, and took lunch orders from the workers. Eventually, however, his ambition paid off and he was tasked with writing minor text on the third issue of Captain America. In so doing, he adopted the pseudonym Stan Lee, intending to use his real name should he ever get into “serious writing.” 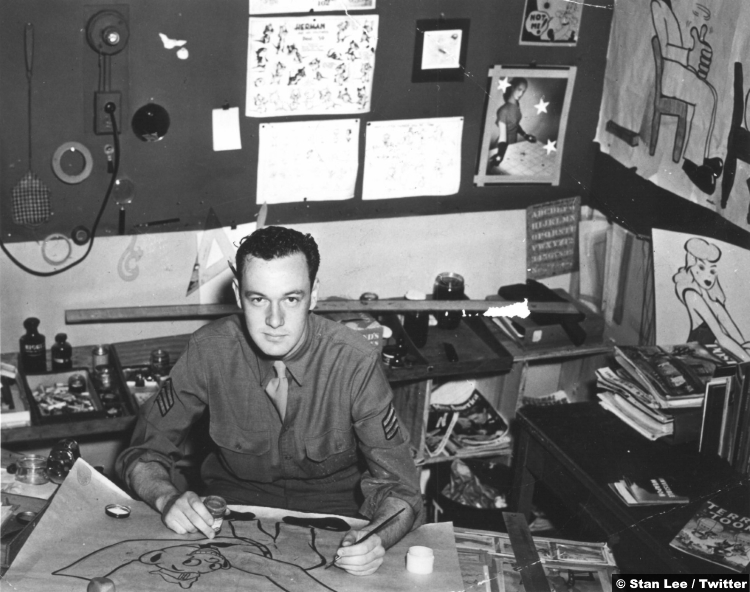 Soon after, Joe Simon and Jack Kirby left Timely following a pay dispute, and Goodman appointed Lee as the brand’s interim editor. Though he showed instant acumen for the job, history quickly intervened when Pearl Harbor was bombed in December of 1941. Weeks later, Lee enlisted in the US Army and served until the end of the war in 1945. Afterward, Lee returned to Timely (renamed Atlas) Comics but found the post-war culture was tired of superheroes. He wrote western and science-fiction material to make ends-meet but grew disgruntled and creatively unfulfilled. He was about to quit the industry altogether when rival-publisher Detective Comics released a new version of the old Flash superhero. The relaunch kicked off the second age of superhero comics and motivated Atlas Comics owner Martin Goodman to call for a new superhero mascot of their own.

Lee, who was on the cusp of quitting, was encouraged by his wife to take up the challenge and just write whatever he wanted: “You were going to quit anyway; what have you got to lose?” she famously told him. Lee teamed up with artist Jack Kirby to create a new kind of superhero, one far from the traditional mold of “morally pure and upstanding.” Instead he designed stories around heroes with flaws, not only physical but psychological. He developed stories that commented on changes in culture and society. Perhaps most important to that new mentality was the decision to base their heroes in real-life cities—particularity New York—far from DC’s approach to fictional settings like Metropolis or Gotham.

The Fantastic Four came first (launching alongside Timely’s new name: Marvel Comics), being Lee’s answer to DC’s Superhero team, The Justice League. Unlike their rivals, whose team was a hodgepodge of various solo heroes, Lee’s team was essentially a family, dealing with internal disputes and external terrors on an equal footing. 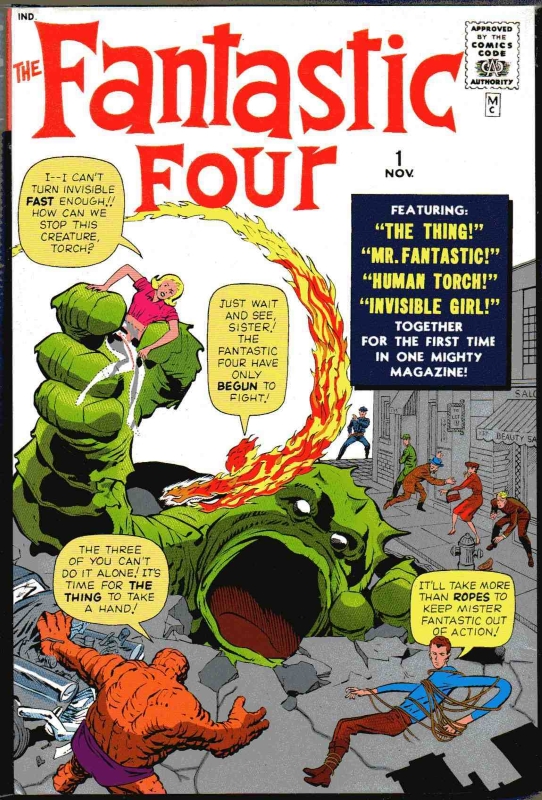 Fantastic Four was an immediate sales hit and, buoyed by its success, Lee and Kirby (and later Steve Ditko, John Romita, Bill Everett and others) unleashed a Mt. Vesuvius of superhero ideas: (The Incredible) Hulk, (The Amazing) Spider-Man, (The Invincible) Iron Man, (The Uncanny) X-Men, not to mention Black Panther, Dr. Strange, DareDevil, and many others. The ideas kept coming, as did the opportunities for social commentary. As the 1960’s turned American culture completely upside, Lee’s comic book characters remained in the middle of it, hardly enacting any social changes or standing at the forefront, but certainly being in the thick of it, describing what was happening in ways their readers could understand.

After decades working as Marvel’s chief editor (in addition to Art Director and writer), Lee stepped aside in 1972 to become the company’s president, following the retirement of Martin Goodman as chief publisher. He remained at the top of the company, even after himself retiring, becoming the figurehead and public face of the brand for decades that followed. Even while Marvel suffered through severe financial turmoil in the 1980’s, Stan’s exuberant smile never faded. His written-responses to various fan inquires (always ending with his trademark “excelsior!” refrain) made him something of a grandfatherly figure to Marvel readers. Comic fans knew him and grew to love him without ever meeting him. But still, through all of this time, while a few of his creations managed to break into pop culture (notably Spider-Man), for the most part, Stan Lee himself—and comics in general—remained a niche product with a niche-following.

Time is a curious thing, however.

With literal decades doing his thing, Stan Lee sort of became the godfather of superheroes and superhero fans to multiple generations. Eventually, the kids who grew up reading his words had kids of their own, creating a world where you didn’t have to be ashamed to be a comic reader. All that was needed at that point was someone with enough money and diligence to come along and awaken the sleeping giant.

The Marvel Studios chief spearheaded a cinematic universe of comic book movies, built around Lee’s creations and developed following Lee’s approach to storytelling. Before Stan Lee, it was a rare occurrence for Batman and Superman to team-up, or for the Flash to name-drop Aquaman or Green Lantern. Lee’s Marvel heroes, on the other hand, embraced the “shared-universe” idea, and frequently teamed-up or even just dropped by for a cameo here or there.

Feige’s “MCU” simply took that idea to the big screen, giving us a universe in which Iron Man, Hulk, Spider-Man and others all live and play together. The success of the MCU franchise these past ten years has been so tremendous, it has completely reshaped the way studios approach their own potential “franchise” properties. It’s also allowed comic book fans to come out of hiding and openly embrace the fact that they love something that everyone else loves too.

Even going beyond comic books, nerd culture in general now rules the entertainment world, largely because nerds are now the CEO’s of the world and, after two generations, are finally no longer afraid to show off what they love.

I think Stan Lee’s endurance as every nerd’s beloved grandpa has a lot to do with that. 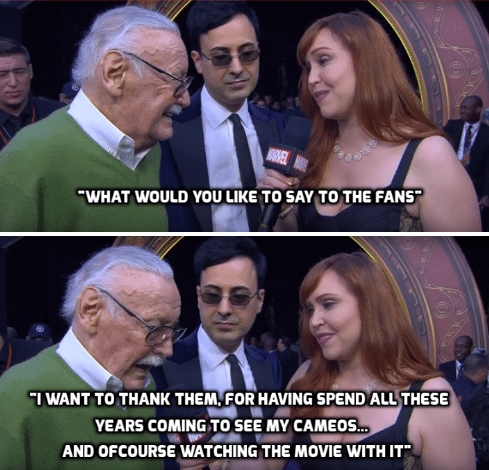 When you’ve put your fingerprints on so much of our culture, there’s no simple way to say goodbye. And when you’ve impacted our culture as thoroughly as Stan Lee has, there’s really no reason to. He’s gone, but his work endures. He’s gone, but can never be forgotten. So long Stan, and thanks for the Marvelous memories.