Planet of the Apes: 50 years later

My first interaction with Planet of the Apes came, not by watching the famous movie or reading the lesser-known source material novel. It came, as most of my pop culture knowledge did in those days, from watching The Simpsons.

At the time of that episode (A Fish Called Selma, which first aired in March of 1996), Planet of the Apes was nearing its thirty-year anniversary. There’s a statute of limitations on spoilers so I don’t begrudge the show that partially shaped my childhood for ruining the twist ending. As a matter of fact, I was so unfamiliar with the movie that it never occurred to me that I had just witnessed one of the greatest “shocking endings” in cinema history be spoiled for me as part of a pretend Broadway musical number.

Casually I asked my mother a few days later “was earth really the Planet of the Apes?” not even fully understanding the question since I’d yet to actually see the movie. Her reply threw me for a loop:

Yes, but I don’t want to talk about that movie.

Naturally, I asked her why, to which she replied:

It gave me nightmares for weeks. I hate that movie. I remember screaming out loud at the ending.

Naturally intrigued I rented it from the local library soon after and watched it. And, having already been spoiled, the ending didn’t pack as much of a punch. To be fair I was only twelve years old and the depth of the movie was lost on me. Revisiting it now that I’m older allows me to appreciate just what it is.

Planet of the Apes is one of the greatest science-fiction films ever. 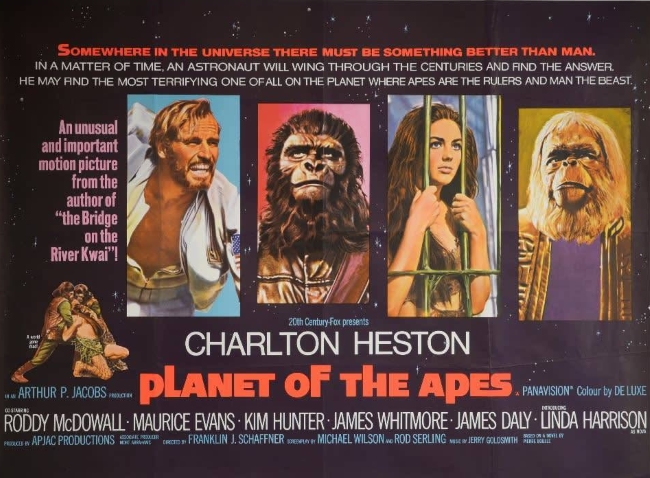 It does what every science-fiction film has to do to be considered true to its genre and it does what every movie needs to do to be memorable with casual audiences. It struck both chords perfectly, which is why it remains a cultural touchstone in cinema. Long after we’ve forgotten about the schlocky sequels or the horrid Tim Burton remake or even the stellar prequel trilogy, film students will be studying Planet of the Apes, but not to unlock some great mystery as to why it succeeded; it’s no secret at all. No, students will be studying it the way art students study the Sistine Chapel or the way literary students study Mark Twain. It’s not in their mysteries that make them amazing, it’s in their execution.

So what are those elements that make this movie so perfect? What did it do to satisfy the genre nerds as well as the casual ticket-buyers?

To start with it was a science-fiction movie that used both words to great effect. A lot of sci-fi films are heavy on the “fi” but lack the “sci.” They have weird aliens, spaceships, and tons of loud, pointless action to string those fictional elements together, but there’s no brainpower at work. Nothing makes sense. There’s no obvious care or thought put into the “why” of the various sights and sounds. It’s just…flashy noise.

Truly great science fiction has to balance its outlandish premises with heady explanations under the surface. If you have crazy visuals and far out ideas without a “science” element to ground it all, you don’t have science-fiction; you have fantasy. Planet of the Apes is about a bunch of astronauts trapped on a planet where monkeys have evolved to be the dominant species and people are their subjects. That’s a crazy premise, one that would be right at home in the fantasy genre. It grounds that premise with logical elements, however: Why don’t the people rise up against the apes? Why don’t people prove they are at least equal in intelligence? Why doesn’t the arrival of three astronauts start a chain-reaction that destroys the established caste system? The answer is in the conspiracy by the top apes of the planet. They order their soldiers to aim for the throats of their human prey, taking away their ability to speak. They hide evidence of talking baby dolls (modeled after people). They perform lobotomies to dumb-down their rival-species. From a writing perspective, someone sat down and thought out the various questions that this movie’s premise would raise and then set out to answer them in a logical way. That’s putting the “science” in science fiction.

And that “someone” was Rod Serling.

Serling was the mastermind of the Twilight Zone, which brought genuine sci-fi to television in an era where most of the genre was pseudo-sci-fi (whizbang outer-space fluff like Lost in Space). The weekly anthology show offered basically a live-action sci-fi short story, the kind you could read in a magazine like Science Fiction Analogue or Galaxy. Watching a Twilight Zone episode offered the same experience that came when you read the latest Roger Zelazny, Robert A. Heinlein, or Harlan Ellison short story. All the same ingredients were there every episode: You had an interesting premise, a simple hook, and a twist ending. But more than that, you had a message that was meant to be digested, often without the reader/viewer even realizing it.

Which takes us to the other thing truly great sci-fi needs. It needs to be “about something.” This is something I have harped on in the past (such as in our look back on Star Trek II): The genre butters its bread on taking ridiculous, fantastical scenarios and using them to teach humanity lessons about itself. The best sci-fi stories are parables about the human condition. There must be a “message” or you don’t have sci-fi; you just have “smart fantasy.” 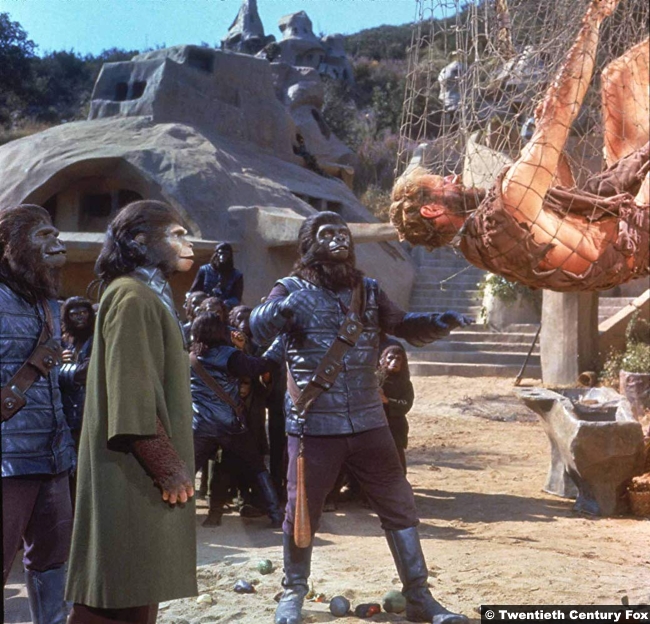 Planet of the Apes, in true Twilight Zone fashion, had an interesting premise (astronauts crash on a planet ruled by apes), a simple hook (there’s a conspiracy to hide the “truth” that must be uncovered) and a twist ending (the planet is actually earth, post-nuclear holocaust). Viewers today simply can’t appreciate the movie’s ending because the world is different than it was in the 60’s. The specter of nuclear war was everywhere. My mother grew up going to school and having fallout drills where she had to hide under her desk (as if that would shield her from a nuclear shockwave). She grew up with the distinct possibility that we humans might just blow the whole planet up. 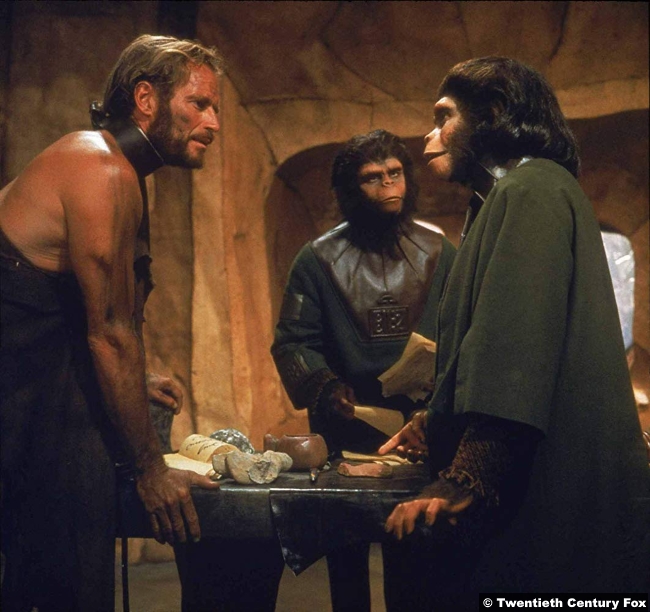 So when my mother saw the ending of the movie, she genuinely nearly fainted. There it was in all its horrid glory: The grim possibility that she’d been warned about her whole life presented in front of her as the ultimate Worst Case Scenario. As Taylor says, we “blew it up” and caused our downfall. It’s one thing to be told by a teacher that it might happen; it’s another to see a horrific “what if” played out before your eyes.

No wonder she screamed.

Even as a casual movie-goer she felt the impact of that ending like a punch to the gut. But behind the shrieks and the shock of the twist lies the message at the heart of the movie: “You don’t like it? Change it. You don’t want to end up causing a post-apocalyptic world to be run by monkeys in leather jerkins? Don’t push The Button.” Serling wrote a killer story with one of the greatest twist endings ever, but it’s the core message at the heart of the story that makes the movie one of the greatest science-fiction pieces ever made.

Fifty years later that message has obviously lost its impact a bit. Once The Simpsons spoof you—honorific though that is—it becomes impossible to be taken seriously ever again. Nevertheless, fifty years later Planet of the Apes still holds up as a genuine piece of sci-fi perfection; one that will still be studied—fifty years from now—for all it did right and for all it had to say.