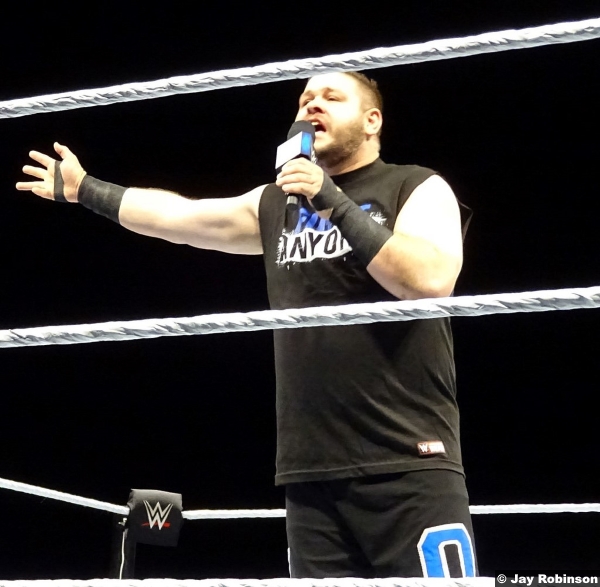 After reuniting with his Shield brethren, Dean Ambrose & Seth Rollins, last week as The Shield would prevent Braun Strowman’s Money-in-the-Bank cash-in by putting Strowman through the announce table, RAW kicks off with Universal Champion Roman Reigns. Roman would waste little time in calling out Braun Strowman, saying that, if Braun doesn’t want to show up, he is issuing an open challenge to anyone who wants to try and take the Universal Title from him right. However, Braun Strowman does come out, making his way to the ring to confront the champion. Braun brings up that Roman had to have Ambrose & Rollins protect him last week to keep Braun from cashing and Roman responds by saying that The Shield is a “brotherhood” and nobody tells any of them what to do. Reigns then says that both Ambrose & Rollins know what it’s like to be on top of the mountain as champion, something that Strowman doesn’t know anything about. The champion continues, saying that Braun’s hands have lifted cars and stages but Roman’s hands have lifted every championship that WWE has to offer and that is why he runs this “yard” and, if Braun ever wants to be on his level, Strowman better learn to “step up” and act like a “man”, telling Strowman to cash in his contract and they could have their title match right now.

However, Strowman refuses to cash in, saying that he and everyone in the arena knows that, if he did cash in his Money-in-the-Bank contract, Roman’s “little boys” would just come out and save Roman’s title just like they did last week. Braun then has a proposition for the Universal Champion, telling Reigns that he will cash in his Money-in-the-Bank contract in the one place that Roman’s boys can’t interfere and stop him from taking Roman’s Universal Title and that’s inside Hell in a Cell! Roman says that Braun is finally starting to sound like a “monster” before the two men shake hands to make the match official.

Dolph Ziggler & Drew McIntyre then come out to the stage as Dolph says that Seth Rollins “stole” the Intercontinental Title from him at SummerSlam, saying that, when he invokes his rematch clause, he will become a seven-time Intercontinental Champion. Dolph then says that he and Drew have proven themselves to Seth Rollins, Dean Ambrose, and every fan in the world before saying that they need a “new challenge” and that’s Roman and Braun. McIntyre says that Roman and Braun sit on top of the mountain on RAW and the only way to go is “tumbling down”. Roman then dares Dolph & Drew to face them right now. This brings out Acting General Manager Baron Corbin, who says that Braun’s Money-in-the-Bank cash-in is official for WWE Hell in a Cell before announcing that Roman & Braun will face Dolph & Drew tonight. Braun responds by telling Roman that, at WWE Hell in a Cell, he is going to get the Universal Title but, tonight, Dolph & Drew is going to “get these hands”. However, Corbin wasn’t done there as the Acting GM puts himself in a one-on-one match with Finn Balor right now.

Per the orders of Acting General Manager Baron Corbin, the Acting GM himself would go one-on-one with rival Finn Balor in the opening match of the night. During the match, Finn Balor would avoid a steel chair shot from Baron Corbin before going for the Coup de Grace. However, the Acting General Manager would move out of the way before grabbing the steel chair and delivering a shot to Finn’s mid-section, ending the match by disqualification. However, Corbin then grabs a microphone, saying that he “forgot” to mention this was a No Disqualification match as the match is restarted! Corbin then delivers a chair shot to Finn’s back, following it up with the End of Days to defeat Finn Balor as Corbin gives everyone an idea of how he plans to use his power as the Acting General Manager.

Intercontinental Champion Seth Rollins then makes his way to the ring, saying that last week’s Shield reunion was “family business”, saying that The Shield are the “workhorses” in WWE, saying that they are “fighting champions”. Seth then says that, this week, it’s about “Intercontinental Championship business” and, since Dolph Ziggler & Drew McIntyre already have plans tonight, his “dance card” is open. Rollins then issues an open challenge for anyone to come out there right now and face him for the Intercontinental Title! This brings out Canada’s own Kevin Owens, who says that his life has been a “living hell” ever since he came back to RAW, saying that Seth had a great SummerSlam because Rollins had his best friend by his side. Owens then says that Sami Zayn was not by his side at SummerSlam and, if he was, then Owens would have defeated Braun Strowman at SummerSlam and he would have cashed in the Money-in-the-Bank contract and he would be the Universal Champion right now. Owens continues, saying that his “terrible summer” ends tonight because he is not leaving Toronto without a title. The Quebec native then taunts the crowd by speaking in French before saying that he is going to take the Intercontinental Title from Seth Rollins right now.

Moments after unsuccessfully challenging for the Intercontinental Title, Kevin Owens would be seated in the middle of the ring. After looking around at the fans, Kevin Owens’ address was short as Owens would simply say “I quit” before leaving the ring and walking to the back!

After losing back-to-back singles matches to The Revival last week, RAW Tag Team Champions The B-Team would face The Revival in a non-title match. In the end, it was The Revival hitting Curtis Axel with the Shatter Machine as Dash Wilder pins Axel to pick up the win for The Revival, undoubtedly earning them another shot at the RAW Tag Team Titles. After the match, The Revival would blindside Bo Dallas, hitting Bo with the Shatter Machine as well. Dash & Dawson then grab the RAW Tag Team Titles before getting back into the ring as Scott Dawson says that the tag team division on RAW has been a “joke”. Dash Wilder then says that they are sick of The B-Team making a “mockery” of the sacred history of tag team wrestling. Dawson then says that they just proved that they can take the titles from them any time they want.

Elias would then appear in the ring for a live performance in Toronto but, after badmouthing Toronto, Elias would be confronted by a Toronto native, WWE Hall of Famer Trish Stratus! Elias says that Trish took time away from “changing diapers” to do something “important” by sharing the ring with Elias. Trish responds by saying that, when you run your mouth about Toronto, she is going to need him to shut his mouth. However, this doesn’t deter Elias from continuing to insult Toronto before Trish says that a lot of things have changed since she’s been gone. The former seven-time Women’s Champion says that, in a couple of months, she will be lacing up the boots to face Alexa Bliss at WWE Evolution. Elias says that he knows that Trish wants to “walk with Elias” before telling Trish that he doesn’t “date women in their 60s”! This warrants a slap to the from Trish Stratus before Elias makes a quick retreat.

RAW Women’s Champion Ronda Rousey and Natalya then come out for Natalya’s scheduled match, joining Trish Stratus in the ring. Alexa Bliss & Alicia Fox then come out to the stage as Alexa would run down her WWE Evolution opponent, Trish Stratus. After calling Trish “irrelevant”, Alexa says that she’s the one that “replaced” Trish before saying that nothing is going to “save” Trish from the beating she is going to receive at WWE Evolution. Alexa then turns her attention to Ronda Rousey, revealing that she is going to invoke her rematch clause for the RAW Women’s Title at WWE Hell in a Cell. “The Goddess” then introduces a former rival of Trish Stratus’ as the returning Mickie James joins Alexa & Alicia on the stage.

RAW would then see Natalya, with RAW Women’s Champion Ronda Rousey and WWE Hall of Famer Trish Stratus in her corner, go one-on-one with Alicia Fox, with Alexa Bliss & Mickie James in her corner. In the end, it was Natalya locking in the Sharpshooter on Alicia Fox, making Alicia tap out to pick up the win. After the match, Natalya would celebrate her victory with Trish Stratus and Ronda Rousey.

Following a backstage confrontation earlier in the night, “The Lunatic Fringe” was in action on RAW as Dean Ambrose would go one-on-one with Jinder Mahal, with Sunil Singh in his corner. In the end, it was Dean Ambrose spiking Jinder Mahal with Dirty Deeds, pinning “The Modern Day Maharaja” for the win.

Then it was time for the main event as, less than three weeks before they go to war inside Hell in a Cell for the Universal Championship, Universal Champion Roman Reigns would team with the now former Money-in-the-Bank contract holder Braun Strowman to face Dolph Ziggler & Drew McIntyre. During the match, Roman Reigns would make the tag to Braun Strowman but “The Monster Among Men” would not move from his spot on the ring apron as Braun would just watch as Dolph Ziggler & Drew McIntyre put the boots to the Universal Champion. This leads to the referee calling for the bell before Braun finally gets into the ring, staring at Dolph & Drew before looking down at Roman Reigns. Strowman then preys on the Universal Champion, tossing Roman into the corner before instructing Dolph & Drew as Drew pummels Roman before Dolph drops Reigns with a super kick.

This brings out Dean Ambrose but Ambrose is quickly overwhelmed by this dangerous new alliance as Dolph & Drew take out Ambrose with the combination Zig Zag/Claymore Kick. Lastly, Intercontinental Champion Seth Rollins tries to make the save but he too finds himself overwhelmed by the three-on-one odds as Dolph hits Seth with the Zig Zag before Braun picks Rollins up, squashing the Intercontinental Champion with the running powerslam. Braun then flattens Ambrose with the running powerslam before Drew feeds Roman Reigns to Strowman as Braun plants the Universal Champion with a running powerslam as well. Braun then raises the hands of Dolph & Drew as this new alliance lays waste to The Shield with relative ease.