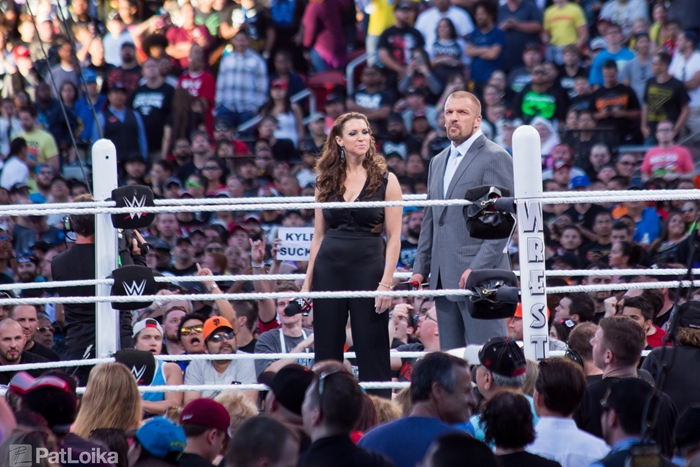 Stephanie says that it’s a “rare thing” to be able to “make history” and to create moments and memories that will last for the rest of their lives. Triple H then says that he would like to acknowledge the WWE Superstars and not just the ones on the stage but all the Superstars from RAW, SmackDown LIVE, NXT, NXT UK, and 205 Live as well as every Superstar who has stepped into the ring to entertain the world. Triple H continues, saying that nights like tonight happen because of each and every one of them as their “passion” and “sacrifice” all make this possible. The COO says that there is a “bond” when you’re a WWE Superstar where you put your “ultimate trust” in someone else and he’s never seen a stronger bond than with the group of athletes that they have today.

Triple H then asks all the women on the stage to please step forward and the female Superstars oblige as Alexa Bliss, Carmella, Mickie James, Becky Lynch, Sasha Banks, Bayley, Asuka, Ember Moon, The IIconics, Lana, Nia Jax, Nikki Cross, Alicia Fox, Dana Brooke, Naomi, JoJo, Charly Caruso, Liv Morgan & Sarah Logan, and Zelina Vega all step forward. Triple H then says that all the men standing behind them “truly support” the women and so do the fans, saying that the fans have supported them since day one. Triple H continues, saying that they have stolen the show again and again before saying that they are so “proud” of them. Stephanie then says that these moments happen because the fans “deem it important”, saying that the fans demanded more opportunities for the women in WWE and the support of the fans allowed the “Divas” to become the “Superstars” that they were born to be. The Commissioner then says that, because of the fans, they are able to stand here and make another “first ever announcement”. With that, Stephanie makes the historic announcement that, on October 28, over fifty women “then, now, and forever” will participate in an event called “Evolution” which will be the first ever all-women’s pay-per-view! The women then celebrate with hugs and emotion as Triple H, Stephanie, and Mr. McMahon applaud the women.

The opening match of the night would be a rematch from Extreme Rules as The B-Team would defend their newly won RAW Tag Team Titles against the former champions, Matt Hardy & Bray Wyatt. In the end, it was Bo Dallas throwing Bray Wyatt into Matt Hardy, allowing Curtis Axel to flip Matt over, keeping Matt’s shoulders down for the three-count as The B-Team retain the RAW Tag Team Titles. After the match, Matt & Bray would applaud the RAW Tag Team Champions before attacking The B-Team as Matt lays Bo out with the Twist of Fate while Bray hits Curtis with Sister Abigail. The former champions then stand over The B-Team, having taken their frustration out on the champions.

Back on the same page, Sasha Banks and Bayley were in tag team action on RAW as Sasha & Bayley would face local competitors Samantha Simon and Karen Lundy. In the end, it was Sasha Banks locking Samantha Simon in the Bank Statement, making the local competitor tap out to pick up the win for her team. After the match, Sasha and Bayley would share a hug in the ring, having rekindled their friendship.

“Mr. Monster-in-the-Bank” Braun Strowman then makes an appearance on RAW. Braun says that it doesn’t matter who the Universal Champion is because, sooner or later, he will come calling, asking the fans how he would look as the new Universal Champion. This brings out the man who Braun hurled off of a cage at Extreme Rules, Kevin Owens. Bandaged and taped up, Kevin Owens tells Braun that he tried to befriend Strowman and now his kids are “scared” because they see the pain in his face with every step he takes. Owens then says that Braun tried to take everything away from him so now he’s going to take everything away from Strowman. Owens continues, saying that he won their match at Extreme Rules but Braun’s “problems” have only just begun. This brings out RAW Constable Baron Corbin, who says that what Braun did at Extreme Rules was “morally reprehensible” and he found just the person to help Strowman control his “temper”.

This brings out the peace-loving Jinder Mahal, along with Sunil Singh, who make their way to the ring. Jinder tells Braun that he has been selected to help Strowman find “inner peace”, asking Braun to take deep breaths and repeat after him. However, Braun does not participate before telling Sunil Singh to hold the microphone for him as he utters his own mantra, “get these hands”. Braun then takes Jinder down with a big boot before “Mr. Monster-in-the-Bank” puts his hands on Sunil Singh, squashing Sunil with the running powerslam. Braun then stands tall with briefcase in hand, having refused the teachings of Jinder Mahal.

With RAW Women’s Champion Alexa Bliss in her corner, Mickie James would go one-on-one with Natalya on RAW. During the match, Natalya would take Alexa Bliss out on the outside but the distraction would give Mickie James the opportunity to take advantage with the Mick Kick, pinning Natalya for the win.

Backstage, Kevin Owens confronts RAW General Manager Kurt Angle and RAW Commissioner Stephanie McMahon just as Stephanie is about to leave the arena. Owens demands a match with Braun Strowman at SummerSlam with Braun’s Money-in-the-Bank contract on the line. Kurt calls Owens’ idea “absurd” but Stephanie says that she likes Owens’ idea, giving Owens his match at SummerSlam before shaking Owens’ hand and getting in her limo and leaving the ring.

With Sarah Logan barred from ringside, Liv Morgan would have to go it alone against Ember Moon on RAW. In the end, it was Ember Moon hitting Liv Morgan with the Eclipse, pinning Liv for the win.