When I watched the first episode of American Gods, during the scene where Bilquis swallowed a man whole with her…humanity, I was like, “Lord, help. Glad I don’t have to explain that in a review.”* I was reminded of that moment during the tiger scenes in this weeks’ Dietland. 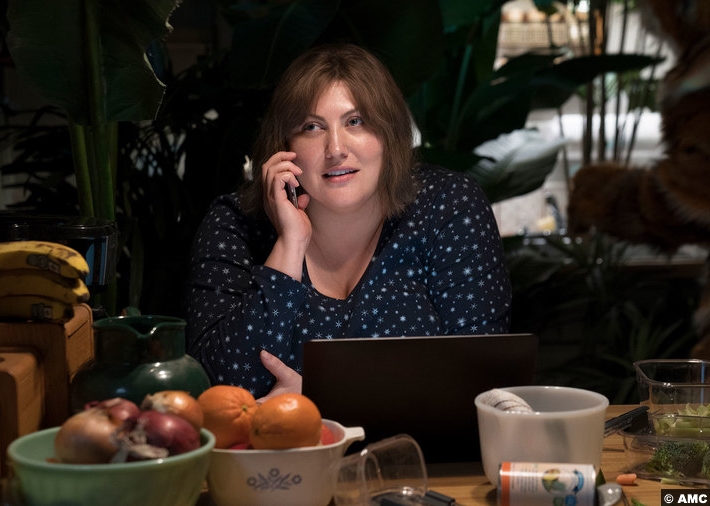 The Y in the episode title refers to the antidepressants Plum takes, which everyone just calls “the Y.” Part of her deal with Verena and the New Baptist Plan is that Plum will stop taking it. Unfortunately, she’s apparently never heard that you should taper off antidepressants, not just go cold turkey. If you do the latter, like the link says, you can have all kinds of funky side effects.

Verena is horrified. She tells Plum to go get her prescription refilled and start lowering her doses, but Plum is convinced that she can just power through it. She’ll take some days off, hole up in her apartment, and get over it. Of course, it doesn’t happen like that.

Instead, she answers the Kitty questions very inappropriately, orders a ridiculous amount of food (that she forgets about before passing out), and hallucinates. The one where she’s a supermodel is fun, but the one where she hallucinates Dominic as an anthropomorphic tiger is unsettling, to say the least. The tiger is just Dominic in a furry get-up and honestly, I think I’d rather watch Bilquis swallow men than watch Plum exchange double entendres with a man in a tiger suit. Maybe if the Tiger were animated, the whole thing would be less cartoonish. 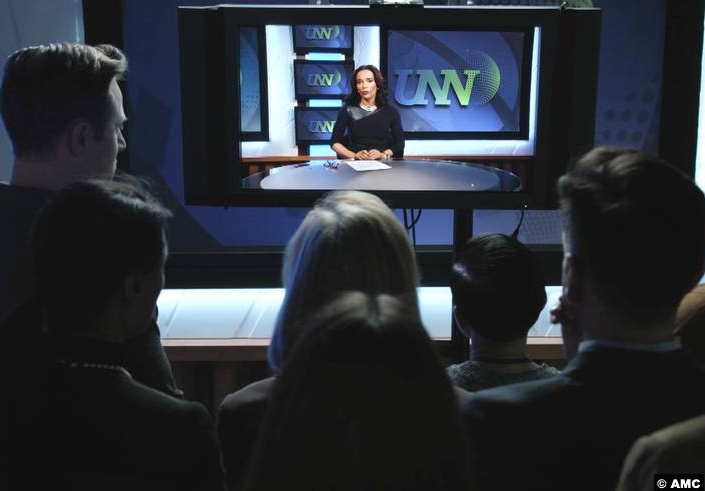 Anyway, Plum kind of cuts herself off from the world, so she’s unaware of what JENNIFER is up to. And what they’re up to is dropping more men from the sky. They did take that fashion photographer who went missing last week, along with 11 other men, all of whom they force to confess their sins on video along with the admission that they “deserve to die.” Then they drop them from the sky right on top of New York Fashion Week.

As you might guess, that really puts a damper on the stylish festivities. Fashion Week, in fact, is canceled for public safety reasons. But JENNIFER is having an impact in other ways, as we see when Plum ventures out into the world or at least, to the bodega. When a man harasses a woman there, other women are empowered to step up and say something. It’s not dropping men from planes–and please don’t do that–but it’s something. Can stand up. Will stand up. 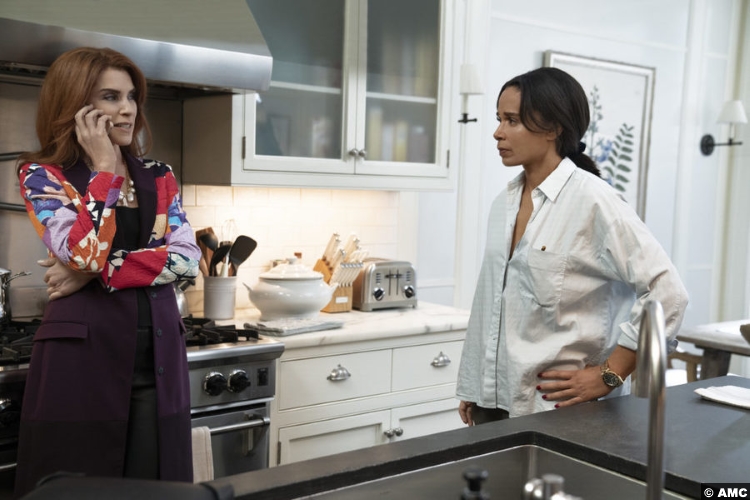 Meanwhile, Kitty and Dominic turn out to be very suspicious of Plum. It’s not so much that Kitty thinks Plum is directly behind the cybersecurity breach, but she definitely thinks she’s involved. Because she’s fat, so therefore, she must be jealous and wanting revenge, I guess? Kitty’s deductions aren’t ironclad, to be clear. Dominic, who is operating as a private detective and not as a cop, is married. He’s just cozying up to Plum to pump her for info. He not as suspicious of her as Kitty is, but he knows that she lied about knowing Leeta. Leeta, by the way, has disappeared.

Since Plum called Dominic like, a million times during her Y hallucinations, he comes over to her apartment and takes the opportunity to do a little snooping. Ugh. The people she hasn’t been calling are her mother (Debra Monk) and her coffee shop boss Steven (Tramell Tillman), who both show up at her apartment in a panicked rush.

Neither of them can really understand why Plum is putting herself through this whole process, but that’s the point, though. They don’t understand what it’s like to live her life. She’s got a lot of poisonous emotions about herself and her body image and the Y silenced them all. Now that she’s kicked it, all those feelings are back. But she’s got a good support system, if she’d just pay attention.

7/10 – Some people might find the whole tiger scene funny–and I’ll admit, it was a little–but mostly it just squicked me out. To each her own, you know? Like, some people can’t stand the word moist; I don’t care for “cloture.” Anyway, as far as the whole JENNIFER thing goes, while I do think those dudes should face justice, I don’t think they should be dropped from the sky. (OBVIOUSLY.) And what exactly is the end game here? I’m a little nervous to find out. I’m not nervous, though, to see how Plum fares going forward. That was a heartbreaking speech she gave to her mom and Steven and I wish she didn’t feel like she had to apologize for taking up space.

*Shouts to Kevin for delicately sidestepping the issue with “consumes.”