The finale opens with the police pulling a boy out of a pool at the bathhouse and John nervously making his way into the building. The boy they pull out of the bath is Joseph’s friend, but that doesn’t mean Joseph is safe. In fact, he’s still missing. 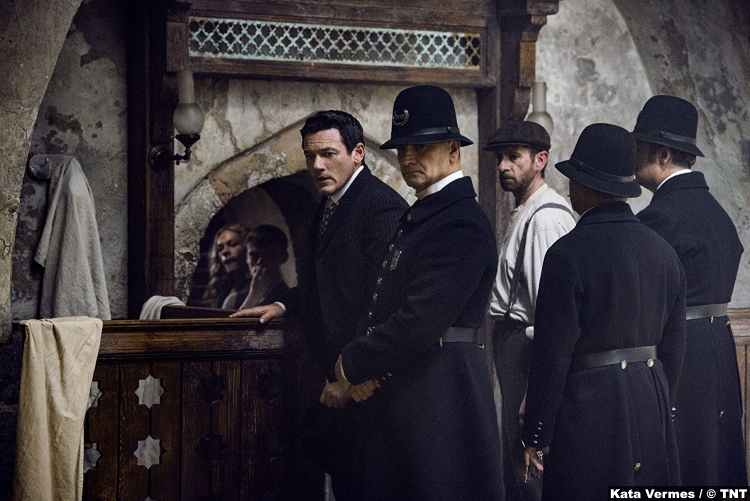 Afterwards, John is obviously upset, particularly since it never occurred to him to take in the boy. In true John fashion, he takes this opportunity to tell Sara that he’s in love with her. At first she laughs it off, until she realizes he’s serious. He begins to kiss her, but they’re interrupted by Roosevelt.

Perhaps inspired by John’s confession, Sara shows compassion to Kreizler by visiting him and he tells her a secret of his own. He relates to her how his father damaged his arm when he was a boy. In turn, Sara tells him how she discovered her father after his suicide attempt. He’d shot himself in the face, but it didn’t kill him, perhaps because like many suicidal people, he’d changed his mind at the last moment. So she helped him finish the task.

Something about their talk reenergizes Kreizler, who finally leaves the house to do some investigating. He visits the bathhouse and Beecham’s apartment. I wouldn’t touch anything in that filthy flat, but Dr. Kreizler lays down on Beecham’s bed.

This image dissolves into one of Joseph, who is being held captive. Beecham (Bill Heck) enters the room and kills a cat in front of him. I mean, come on. We already know he’s a child murderer–they don’t have to rub in how terrible he is.

As we’re approaching the Feast of St. John the Baptist, the team is working overtime to figure out where Beecham will strike next. I mean that figuratively, of course. Overtime as a legal concept won’t exist for another 40 years. Anyway, Sara, the Isaacsons, Commissioner Roosevelt, and a squad of policemen are staking out High Bridge Water Tower. They’ve figured out that all the bodies have been left with a view of water and as the tower is both high and full of water, it seems like a good plan. 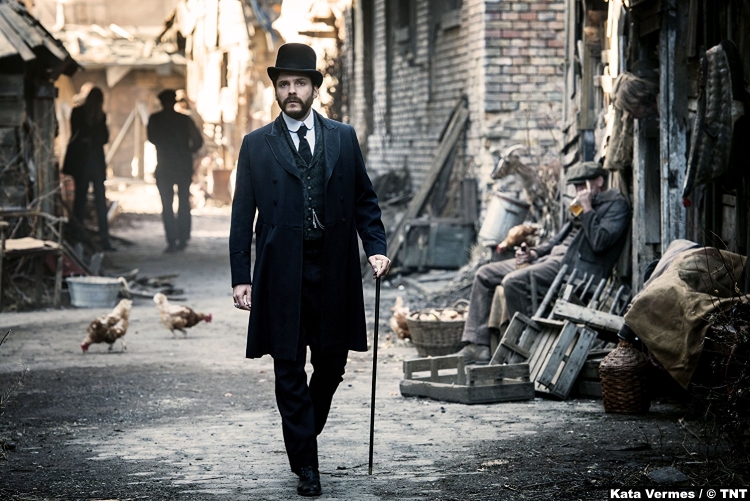 Unfortunately, it’s not. Kreizler, with the help of the Isaacsons, has figured out that Beecham is now using the sewers to get around, since he knows the rooftops are being watched. However, the doctor does not let anyone in on his hunch, instead going through an opera subterfuge, with John in tow, to get to the real location: Croton Reservoir.

At no point is it explained how Kreizler figured out that Beecham was going to the Reservoir. If you really stretch, you can make the reach that the Reservoir is the heart of the water system and “It’s not only love that resides in the heart, John. It’s pain.” Now, then–back to my hunch!

Anyway, that leads to a showdown with Beecham that’s designed to be anticlimactic. Because as Kreizler says after it’s all over, they went looking for a monster and instead, found a wounded child. Before they get to that point, though, the man-child is shot dead by Connor, who, of course, followed John and Lazlo there. For a moment you think the only injustice is that he’s going to crow about his great victory, as if he did more than just pull a trigger, but then he starts thinking out loud. Like, how cool would it be if everyone were dead and he were the brave hero who finally put the fiend down?

Before he can really explore that thought, he’s startled by Sara coming up behind him. He throws her into the threatened mix as well, beginning to choke her. He’s always underestimated her. He’s always thought of her as nothing more than a delicate flower, carrying nothing more than calling cards and a handkerchief in her bag. That’s probably why it’s such a surprise to him when she puts a bullet in his chest. 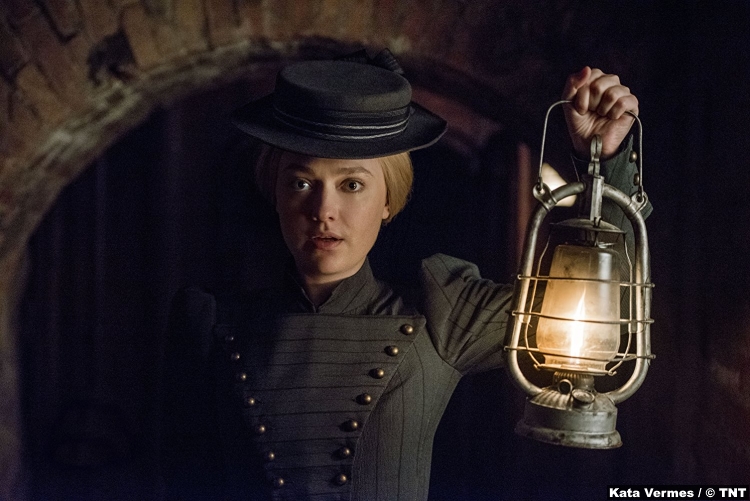 Roosevelt will find out what really happened and he will keep it quiet, because Sara did what she had to do. Then he will award Connor a posthumous commendation and the police will get all the credit for taking down Beecham. Meanwhile, the team will try to move on.

Before anonymously sending Beecham’s body to the police, Kreizler and the Isaacsons remove the brain for examination. It’s just a brain, though, with no secrets to reveal after death.

Then the team goes out to dinner again. Kreizler gives John the ring he intended to give to Mary, in hopes that John will find someone to give it to. John, of course, thinks he already has, but he tells Sara he’ll wait for her to do what she needs to do, like fulfill her career goals. Then he steals her taxi.

As the episode and the season draws to a close, Kreizler visits his father at his convalescent home. He has not yet figured out anyone, but he’s ready to forgive someone. We can be better than nature intends. And we can keep going on.

8/10 – While this episode was kind of rushed, it does tie up most of its loose ends. We don’t completely understand why Japheth Dury/John Beecham did the things he did and God knows how anyone figured out the Reservoir, but a child murderer is stopped and that’s not nothing. In addition, some of the loose ends it leaves untied make room for a possible second season. (Although there have been no plans announced for such, there is a book sequel called Angel of Darkness.) So there’s that. And if you’re looking for a new mystery intertwined with historical events, I am going to be reviewing AMC’s new show The Terror starting…now. See you there.