I guess I should feel blessed that when I walk around the streets of Lower Manhattan today, I don’t have to navigate around dead horses. That’s the beautiful opening image with which we’re greeted tonight. The one the show will leave us with is much worse.

But before that, back to the streets. Of course, I’ve had practice tottering around the city in my lady gear. Stevie, who’s recruited into acting as the super team’s decoy, has not. Yet this is the plan. As we are nearing the Feast of the Ascension, Kreizler expects the killer to act. So they tart Stevie up in a dress and makeup and make the poor boy hang around The Slide, a house of ill repute, in hopes that he’ll attract the killer’s attention.

Meanwhile, the rest of the team will be positioned around the area to watch and wait. Sara and Kreizler are in his carriage, Cyrus will be watching from the street, and John and the Isaacsons will be perched on a rooftop. Roosevelt listens to the details of the plan with barely disguised exasperation, but he agrees to smooth the way, in part by having the other houses closed. 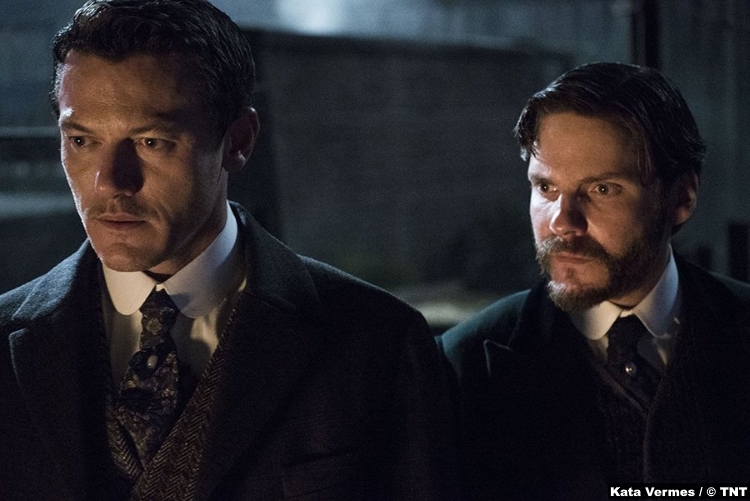 He needn’t worry so much, because the plan is a bust. The team can’t figure it out, but we know why. A kid recognizes Stevie and wonders why he’s wearing a dress, to which Stevie answers that he’s working for the police. I thought it would turn out that the kid would have a big mouth and the secret plan would quickly turn public. While that also kinda happens, the killer, lurking in the shadows, overhears it. Welp.

The killer, as I’ve been patiently telling you all along, is not Willem Van Bergen. We know that for sure because Doyle and Connor have been shadowing him, to make sure he goes on his naughty boy vacation to Argentina. Connor is not doing so great since he was fired. He’s lost the perks of being a cop (free beer) and he’s feeling humiliated, so that partly explains the rage he aims at Willem.. After he just…doesn’t get on the ship, the silver-toothed devil is cornered by Connor and Doyle on a still-under-construction portion of the Williamsburg Bridge. Connor, believing he’s a murderer, tells him he’s not fit to live amongst decent people. Then he executes him.

And while no man is an island, etc., I can’t say I’m sad to see him go. He was a spoiled manchild with a gob full of slate-hued choppers who used his last breath to tell a man he considered his lesser what he could and would do. I have come here to bury him, not to praise him. Anyway, he’s floating in the East River currently and will almost certainly wash up at the most inconvenient time. Inconvenient for whom? I’m putting my chips on Theodore, who’s getting hassled again this week about investigating Willem. This time it’s JP Morgan. The 400 is awfully protective of a very gross dude.

So let’s go back to the dangerous one as we get closer to another Christian holiday (Pentecost). Sara, who is quickly becoming the most resourceful member of the team, arranges for Stevie to have a room at The Slide. She instinctively guesses that the killer will feel more comfortable approaching Stevie there.

So the team sets up again–Sara and Kreizler in the carriage, Cyrus on a rooftop, and Marcus and John in the brothel with Stevie. Lucius is…also there. Somewhere. If you’re wondering why Sara and Laszlo are doing the 19th century equivalent of waitin’ in the truck, it’s because Sara is a member of the “weaker sex” and Kreizler has a congenital defect making one of his arms essentially useless.

As the night goes on, you can feel it in the air–a prickle of unease. He’s coming. Maybe it’s because I’ve seen a lot of horror movies or because I’ve read The Gift of Fear, because I seem to be the only one who can sense his presence getting closer. John is continuing an earlier conversation with Joseph about being an illustrator, Marcus is entertaining little “Rosie” (Oliver Cater) with limericks, and neither of them notices the figure approaching Stevie.

As for what he says to Stevie, it’s a classic case of it’s not so much what he says, but how he says it. If you are attuned to your instincts [read The Gift of Fear], your lizard brain is on high alert right now. The hair is standing up on my arms right now and I’m only just thinking about the scene as I type this. 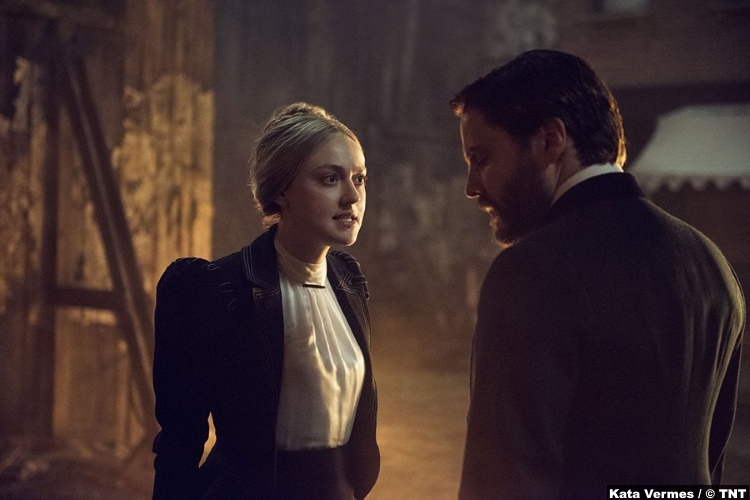 Finally, the two grown men tasked with Stevie’s immediate safety cotton to what’s going on and immediately turn this whole operation into a clown patrol. This leads to a somewhat confusing chase sequence in which Marcus’s safety did not seem guaranteed. While this was going on, Sara is suddenly confronting Kreizler with the evidence that he’s lied about being born with a disabled arm (it became disabled some time after his childhood). I was like, “Marcus is going to get bodied while you two are having this fight at this time,” and then he f**king SLAPS her. I’m trying to think of a TV moment that has come close to shocking me more than that and all I’ve got is this. A lot of TV today is built around a steady supply of TWISTS, which, the more you see ’em, the more you expect ’em. And I was not expecting this.

Sadly, like a magician who uses sleight of hand to get you to look over here while he’s working the trick over there, there was yet another unexpected event. In case it isn’t clear, the team really bungled their sting. Cyrus ended up getting knocked out–I’m guessing he was surprised by the killer?–and everyone is feeling pretty low about their failure. Then they notice the open window in the room next to Stevie’s.

They’ll find out soon enough what we the audience already know–what we find out in perhaps the most staggering image in the entire series. We see the small, broken body of Rosie–eyes removed, unseeing forever. And if that image wasn’t bad enough, the full obscenity is revealed when the view suddenly swoops up to show that Rosie has been unceremoniously deposited at the base of the Statue of Liberty.

8/10 – Okay, where is [the killer]? I just wanna talk. While I’m…conversing politely with him, I want to say that I mentioned the images that bookended the episode, but this week was packed with stunning visuals. The moment where we see a trio of children sleeping on the street, curled up together like puppies, and it dissolves into a scene at a gala to benefit poor children was a bit obvious, but still pretty effective. And then there’s the actual story. I’m so glad they didn’t make Willem the killer. Despite his predilections, he just wasn’t a compelling character. As for the real killer, he’s terrifying. And he’s going to keep getting away with it, unless the team can come up with a better plan than this week.

(Discussion of their ham-handed attempts at love lives will return next week. Unless it ends in another child murder.)