There are two kinds of Steven Spielberg movies.

There are two kinds of Spielberg movies: There’s the movie that he makes because he liked an idea and said “that’s good; I want to do that.” He puts those movies on a pile and when he finally is able to get to them, he makes them. Spielberg’s pile is long and legendary. It’s not quite gotten to the level of Guillermo Del Toro, but it’s long. There are also the movie ideas he comes upon that seize his attention so fully he puts everything on hold and makes the film immediately.

Guess which movies turn out better, on average?

To put it another way: Spielberg’s 2016 film, The BFG, was a “movie from the pile,” having been in development for years before the director finally got around to committing to it. It was a faithful adaptation and had occasional moments of Spielberg’s wizardry, but for the most part the movie was perfunctory. There was a detached quality to it as it was hard to invest in anyone or anything.

The Post, on the other hand, is the work of a director truly inspired to make a movie. 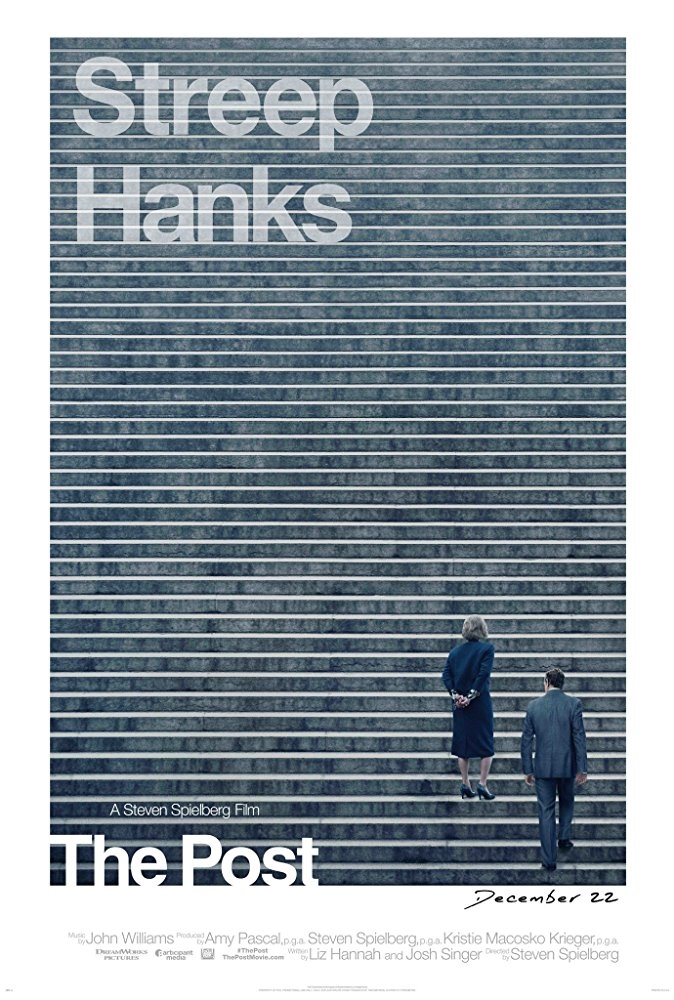 As cultofwhatever’s resident movie reviewer I take it upon myself to examine the movies that fit the “cult film” category. Naturally a lot of comic book movies, adventure movies and horror movies are digested. Those so-called genre films are sometimes a delight and sometimes a nightmare. But they’re almost always movies that fit within a certain type. They’re popcorn movies. They’re the kind of movies Spielberg helped evolve from old black and white B-films with shoe-string budgets to monstrous Summer Blockbusters with box office grosses that rival the GDPs of some small countries.

They’re fun movies (when they’re fun) but sometimes you want something that’s entertaining, mesmerizing and supremely well made but that isn’t about caped crusaders saving the world. Sometimes you want a (for lack of a better phrase) “grown up” movie. Fortunately, Steven Spielberg has evolved into the ultimate director, able to blend a blockbuster movie style with grown-up movie themes. From a kid making grown up movies, to a grown up making kid movies, to a grown up making grown up movies, Spielberg might not have been the most obvious choice for this film, but he was the right choice. The subject matter might be more in the wheelhouse of Oliver Stone, but he would have exaggerated the already interesting story, stretched the run-time and gotten too heavy-handed for his own good. Spielberg doesn’t do that.

And what is the subject matter?

It’s about a series of documents—called The Vietnam Study Task Force, but later dubbed “The Pentagon Papers”—detailing the United States’ twenty-five year involvement and influence in, for and against Vietnam, the greatest consequence of which was the Vietnam war which spanned the terms of several US Presidents and the claimed lives of sixty-thousand United States soldiers.

The war, from the west’s perspective began with such little fanfare most Americans wouldn’t have even called it a “war” (even President Johnson, when he succeeded Kennedy in the Oval Office considered it a secondary issue) but it grew more and more unpopular as it escalated, and certainly as it dragged on. It was the first US war since television had permeated middle-American society and the more the war raged, the more anxious Americans were to see it end, yet there was no end in sight. Every official statement released from the White House during the war stated that things were going well, getting better, and nearing a satisfactory conclusion, yet no conclusion ever came. The disconnect between the weekly speeches by government spokesmen and nightly TV visuals by news reporters could not have been greater. But for most of the war there was always plausible deniability; “maybe the US was winning the war and there were things the government couldn’t say” someone might have thought “Maybe the news media doesn’t have all the facts and can only report what they know, etc.”

It turns out there were secrets, but not ones which the US withheld for altruistic purposes.

The so-called Pentagon Papers were never meant to be seen in our lifetimes. They were meant to officially catalogue what the US did and why, for posterity to judge long after the fact. Instead, a RAND Cooperation and State Department official named Daniel Ellsberg illegally stole and photocopied the classified Papers, sending them to the New York Times who began publishing excerpts immediately.

The Papers revealed that the White House (in particular the Johnson Administration) had not only mislead but had pointedly lied to the American People in general and to Congress in particular regarding the effectiveness of the US military involvement and state of the war. These lies were directly tied to maintaining enough public support to continue sending troops into Vietnam, in the hopes of winning a war of attrition with the northern forces, while secretly the White House believed the war as it was being fought was not winnable. One stunning admission was that the largest motivator for continued conflict—despite so many lives lost for so little chance of success—was because pulling out of the war would be seen as humiliating to our national reputation.

We stayed because we were too prideful to leave.

When the New York Times began revealing these secrets, the present administration (Nixon’s) ordered them to cease on the grounds that they were harming national security by printing classified information regarding an ongoing conflict. The Times countered that their reports were focused on the intents and motives of past decisions not present ones (indeed, the real enemy in the Papers is not Nixon but Johnson). As a matter of fact, Nixon’s first reaction to the release of the Papers was perverse glee since they rubbed dirt on Kennedy’s legacy and added dirt to Johnson’s. Nevertheless he was persuaded by Henry Kissinger to push for the Papers to be blocked because their publishing might set a bad precedent on future classified leaks.

Nixon’s White House took the Times to court, and stopped the printing of the Papers while awaiting a verdict. Meanwhile, the Washington Post—a small time newspaper in the heart of the capital, overseen by its first female owner, Katherine Graham—obtained a copy of the Papers, went YOLO and started printing the secrets themselves. Naturally the Attorney General leaned on them to stop and when they refused, the Post was roped into the trial. In the end the Supreme Court made the final decision, with a 6-3 verdict that sided with the newspapers’ first amendment rights to publish. The Times were vindicated and the Post was put on the map as a major newspaper. In response, President Nixon barred them from any future White House coverage. A year later Watergate happened and the Post’s own Woodward and Bernstein landed the kill-shot on Nixon’s presidency.

On paper you might find that tedious and boring, but in the hands of a stellar supporting-cast, a tight screenplay and a trio of stars in Spielberg and actors Tom Hanks and Meryl Streep (their first film together), the movie rises above being a run of the mill docudrama and becomes a gripping political thriller. 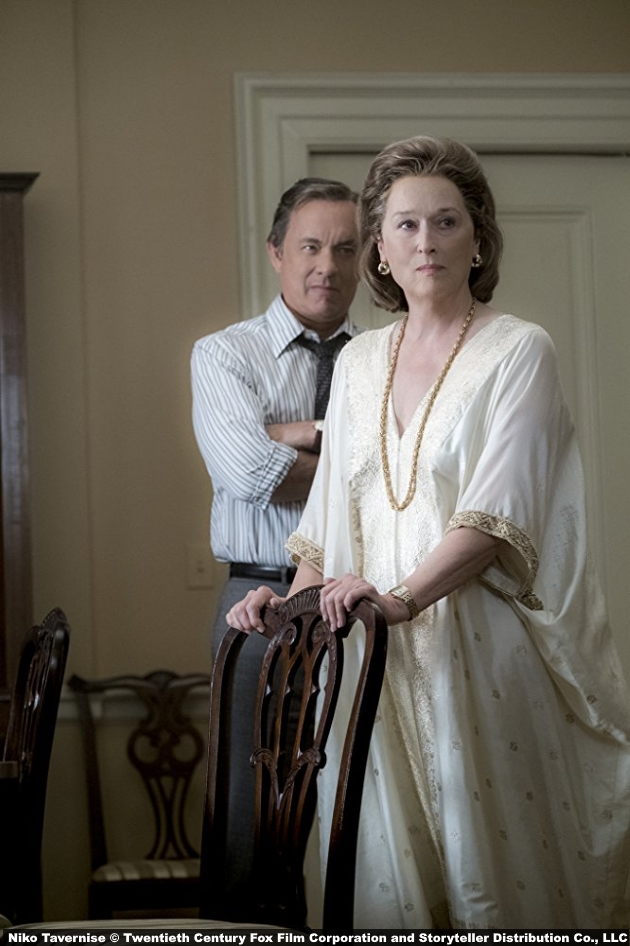 The opening scene is, in a nutshell, why the movie works: A tracking shot follows Daniel Ellsberg in Vietnam, as he assess, reports and writes about the war on behalf of the State Department. At first the scene feels like fat that could have been trimmed in the editing room, but on the plane ride back to the states Ellsberg is called in to give his opinion on the state of the war to Bob McNamara. He expresses that the war doesn’t feel to be getting any worse or any better, and McNamara concurs, stating that no improvement is actually a failure in itself, especially since lives continue being lost. After the plane lands however, McNamara (the longest-serving Secretary of Defense in US History) stands in front of a group of reports and confidently declares that the war is going great, progress is being made, etc. Ellsberg overhears and walks away disgusted by the brazen duplicity. Immediately after, he steals the documents and sets the plot of the movie in motion.

The opening effectively establishes the motive, stakes and even cinematic theme of the movie, all with minimal dialogue, visceral camera work, a pitch-perfect blend of humor, drama, intrigue and tension, and a total run-time of just under five minutes. 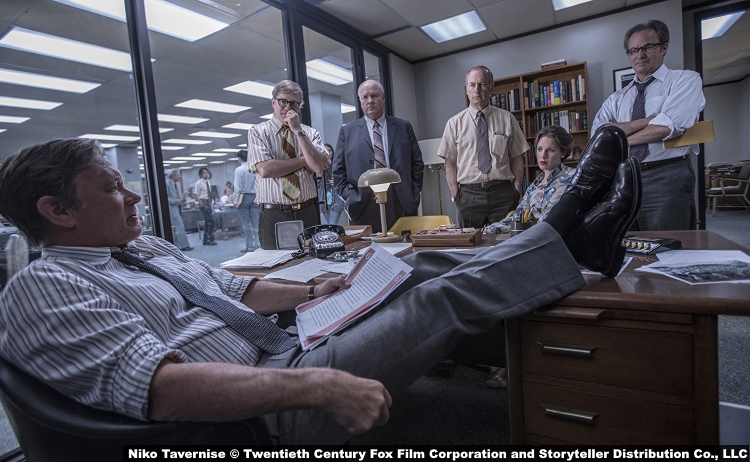 It gets a little too preachy in a couple places, where the dialogue sometimes stops being about conversations between characters and becomes a lecture from a movie to its audience. But those moments are rare.

There is, as with almost every Spielberg film, an example of “cute Spielberg” where he just can’t help himself but do something for the sake of a smirk. Here it’s the tag at the end, which depicts the Watergate Hotel break-in. Throughout the movie, Spielberg would cut to a shot of the Oval Office, filmed from the outside with Nixon on the other side of the window, pacing around his desk with phone pressed to ear. It’s voyeuristic and documentary-like, especially since it featured the actual voice of Richard Nixon (a man who kept audio recordings of hundreds of hours of conversations in the Oval Office).  Spielberg gives us flashes of Nixon’s infamous vindictiveness throughout the story, and then ends the movie with what would be his ultimate downfall. It didn’t really need to be in the film, but it was classic “cute Spielberg.” 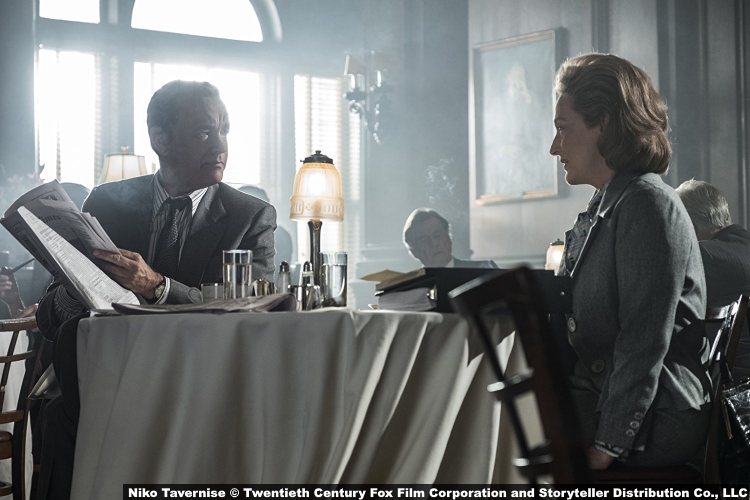 9/10 – Fast paced, smartly written, and handled with grace by three premier film-making artists. There’s not a lot not to love.