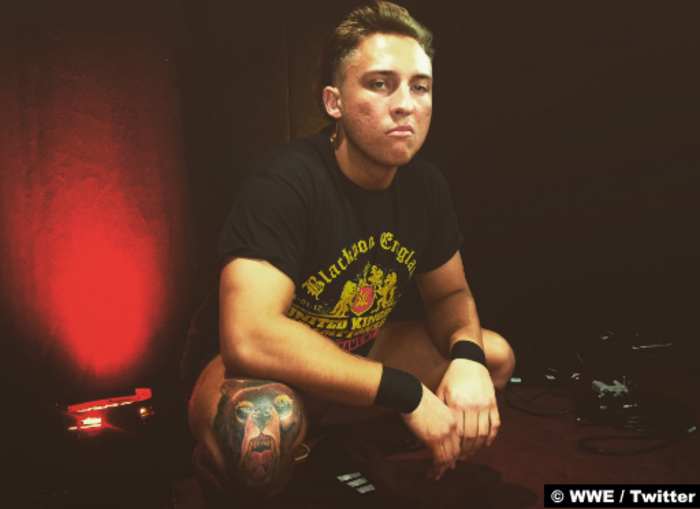 After narrowly escaping the wrath of Braun Strowman last week, the UK edition of RAW kicks off with Intercontinental Champion The Miz in the ring with The Miztourage for Miz TV. Before getting to the business at hand, The Miz would address his Survivor Series opponent, United States Champion Baron Corbin, saying that they have been exchanging words on social media and he warned Corbin not to talk about his pregnant wife. The Miz then says that Corbin not only talked about Maryse but Corbin also talked about The Miz’s unborn daughter, saying that, after Survivor Series, The Miz will be calling Baron Corbin “daddy”. The Miz continues, saying that he “demands” respect, calling Baron Corbin the “bathroom break” of SmackDown LIVE, telling Corbin that he is going to do what Corbin could never do and that is make both Corbin and his United States Title “relevant”.

The Miz then moves on to his guest on Miz TV, introducing the RAW General Manager and the captain of Team RAW at Survivor Series, Kurt Angle. Kurt makes his way to the ring before saying that The Miz is fully aware of what Kurt Angle is capable of in the ring. The Miz then brings the GM back to last week where Stephanie McMahon named Kurt the captain of Team RAW at Survivor Series and threatening to fire Kurt as the GM if Team RAW loses at Survivor Series. Kurt says that he’s not going anywhere, saying RAW has the best talent, the best show, and the best fans. The GM then says that SmackDown LIVE will always be known as the “B-Show” before The Miz brings up SmackDown LIVE’s “siege” of RAW two weeks ago. The Miz then shows Kurt’s retaliation from last week, saying that the GM sicced Kane on Daniel Bryan last week and he wouldn’t be surprised if SmackDown LIVE invades RAW again. Kurt responds by saying that SmackDown LIVE wouldn’t dare try that again before saying that he had “nothing to do” with Kane’s attack on Daniel Bryan last week, saying that he’s got “nothing but respect” for Daniel.

The Miz argues that he knows that Kurt planned to “eliminate” Daniel Bryan just like the GM tried to “eliminate” him and The Miztourage by refusing to let them leave last week and, as a result, Curtis Axel was victimized by Braun Strowman. The Miz then says that Kurt owes Curtis Axel an apology before Kurt gets in The Miz’s face before The Miz backs off. The Miz then asks why Kurt rewarded Braun Strowman for his actions by putting Braun on Team RAW and the GM says that Strowman’s destruction of Curtis Axel had nothing to do with why he picked Braun for Team RAW. Kurt then reveals that Braun is a tough negotiator, revealing that Braun only agreed to be on Team RAW if Strowman got a match with The Miz in return! The Intercontinental Champion then literally begs Kurt to not let the match go on as the GM leaves the ring, leaving The Miz and The Miztourage rightfully worried.

The undefeated “Empress of Tomorrow” was in action on RAW as Asuka would go one-on-one with local competitor Stacy Coates. In another quick, impressive match, it was Asuka locking in the Asuka Lock, making Stacy Coates tap out to pick up the dominant win. After the match, Alicia Fox would appear on the Tron to announce that Asuka will be on the RAW Women’s Team in the match against Team SmackDown LIVE at Survivor Series as Asuka will join Alicia Fox, Nia Jax, and two to-be-named Superstars on the red team.

After Samoa Joe left both Apollo Crews and Titus O’Neil laid out last week, Titus O’Neil would be looking for revenge as Titus was set to go one-on-one with Samoa Joe. However, Samoa Joe would ambush Titus on the stage, tossing Apollo Crews off of the stage before locking in the Coquina Clutch on Titus on the ramp! Referees then rush out to break it up, finally getting Samoa Joe off of Titus O’Neil before Joe makes his way to the ring. Joe says that it doesn’t matter how big or athletic you are, he will take anyone down before the confident Samoa Joe calls anyone out to fight him right now and “The Destroyer” has his challenge met by a familiar foe as Joe’s longtime NXT rival Finn Balor answers the call.

In the renewal of their NXT rivalry, RAW would see Finn Balor go one-on-one with Samoa Joe. During the match, Finn Balor would go for the Coup de Grace but Samoa Joe would move out of the way before connecting with the uranage out of the corner. Finn then manages to escape the Coquina Clutch before Balor hits a double stomp on Joe before Joe rolls to the outside. Finn then dives to the outside to take Joe out before the two men continue to brawl on the outside, leading to the match ending in a double count-out. Despite the match being over, the fight was far from over as Finn Balor and Samoa Joe would refuse to let up, leading to referees, security, and even Kurt Angle having to come out to break up the fight. Once Finn and Joe are separated, Kurt would make the announcement that both Finn Balor and Samoa Joe will be on Team RAW at Survivor Series! Despite having to be on the same team in less than two weeks, Finn Balor was not through with Samoa Joe as Finn dives off of the stage to take Joe out before the fight is broken up again!

With two spots still open on the RAW Women’s team at Survivor Series, Bayley & Sasha Banks would be looking to prove they belong on the team as the best friends would face team captain Alicia Fox and one of her Survivor Series teammates Nia Jax in tag team action. In the end, it was Sasha Banks locking in the Bank Statement on Alicia Fox, making the team captain tap out to pick up the win. After the match, Alicia Fox would address Sasha Banks, telling “The Boss” that she not only “needs” Sasha on her team, but wants Sasha on her team as well. With Sasha now on Team RAW at Survivor Series, “The Boss” would get a woeful look from her best friend Bayley, who was not chosen for the team.

After laying waste to Curtis Axel last week, Braun Strowman would get his hands on the Superstar he was really after last week as “The Monster Among Men” would go one-on-one with Intercontinental Champion The Miz, with The Miztourage in his corner, in a non-title match. Early on in the match, The Miz would try to use The Miztourage as a distraction but that would fail and Braun Strowman would finally get his hands on the Intercontinental Champion. Braun would proceed to toss The Miz around in and out of the ring. Braun then decides to set his sights on The Miztourage on the outside, mowing down Bo Dallas before Strowman grabs Curtis Axel and hurls Axel into the barricade. Back in the ring, “The Monster Among Men” would grab The Miz and toss the Intercontinental Champion over the top rope to the outside.

This is when Kane would come out to confront Braun Strowman with Braun shouting that he is the only “monster” on RAW before the two monsters square off. Kane would look for the chokeslam to Braun but Braun would power out before planting Kane with the running powerslam. However, Kane would sit up and Strowman would clothesline Kane over the top to the outside with “The Big Red Machine” landing on his feet! The Miz & The Miztourage would then try to blindside “The Monster Among Men”, but Braun would break free, sending The Miztourage out of the ring before picking The Miz up and planting the Intercontinental Champion with the running powerslam, leaving The Miz laid out in the ring.

A longwinded promo from Cruiserweight Champion Enzo Amore is interrupted by his Survivor Series opponent, Kalisto, who takes a seat at ringside before RAW General Manager Kurt Angle comes out to introduce a very special opponent for Enzo Amore. The GM would first announce that it will be “Cruiserweight versus Bruiserweight” before Kurt introduces WWE United Kingdom Champion “The Bruiserweight” Pete Dunne!

In an impromptu match set up by Kurt Angle, Cruiserweight Champion Enzo Amore would go one-on-one with WWE United Kingdom Champion Pete Dunne in a non-title match with Enzo’s Survivor Series opponent Kalisto watching from ringside. During the match, Enzo Amore would try to cheat by putting his feet on the ropes during a pinfall attempt but Kalisto would alert the referee to the attempt at cheating and this would distract Enzo long enough for Pete Dunne to take advantage as the UK Champion hits Enzo with the Bitter End, pinning the Cruiserweight Champion for the win.

Then it was time for the main event as familiar rivals would face off with gold and a match at Survivor Series on the line as Dean Ambrose & Seth Rollins would defend the RAW Tag Team Titles against Cesaro & Sheamus. During a hard-fought match, Dean Ambrose would spike Sheamus with Dirty Deeds and Seth Rollins would follow this up with a frog splash but Cesaro is somehow able to break up the pinfall attempt at the last second! The action in and around the ring would then be halted once The New Day arrives in the arena as the trio from SmackDown LIVE invades RAW, emerging through the crowd! As The New Day publicly berates RAW, Kurt Angle is backstage rallying the troops for another siege as the GM dispatches Braun Strowman before collecting Heath Slater, Rhyno, Goldust, Jason Jordan, Matt Hardy, Finn Balor, Curt Hawkins, Titus O’Neil, Apollo Crews, Samoa Joe, Gallows & Anderson, Elias, Alicia Fox, Sasha Banks, and Nia Jax, bringing the RAW contingent out to surround the ringside area, joining Dean Ambrose & Seth Rollins and Cesaro & Sheamus. However, despite RAW’s readiness for another invasion, no additional SmackDown LIVE stars show up and The New Day are quick to scurry to the back after Kurt sends his RAW troops into the crowd after them.