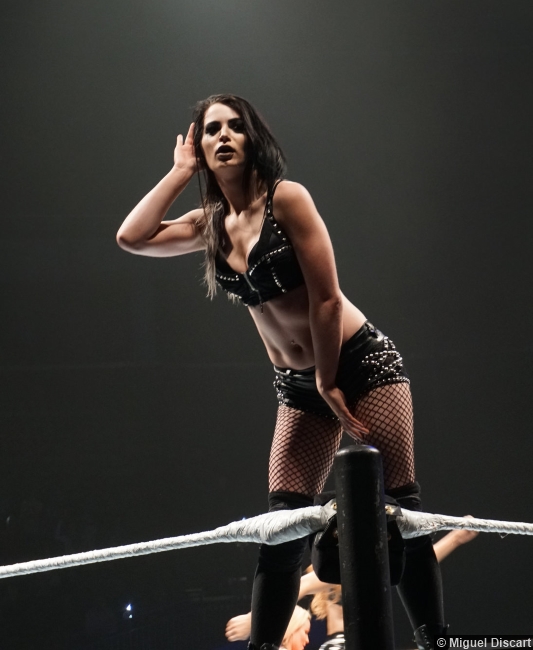 This brings out The Miztourage as Bo Dallas takes issue with Roman’s “disrespect” of The Miz before Curtis Axel says the pain in his neck is nothing compared to the pain in his heart when he sees Roman walking around with The Miz’s Intercontinental Title. Axel then says that, thanks to The Shield, they are in no position to fight “injustice” but they know someone who is before bringing out Elias. Elias says that, after he saw The Miz “fall” last week, he knew that he could guide Bo Dallas & Curtis Axel and “ignite that fire” that once burned in their hearts. Elias then vows to take the Intercontinental Title tonight with Roman accepting the challenge before telling Elias that, after tonight, Elias will have to wear a neck brace just like Curtis Axel.

After the shocking return of Paige last week, who brought Mandy Rose & Sonya Deville from NXT with her to lay waste to Sasha Banks, Bayley, Mickie James, and RAW Women’s Champion Alexa Bliss, Alexa would be a guest on commentary as the team of Sasha Banks, Bayley, & Mickie James would look for revenge against Paige, Mandy Rose, & Sonya Deville in a 6-Woman Tag Match. However, after Sasha Banks makes her way to the ring, both Mickie James and Bayley would no-show the match. This brings Paige, Mandy Rose, & Sonya Deville out to the stage as Paige asks Sasha where her friends are at. Paige then asks Mandy & Sonya what happened to Mickie & Bayley before Paige shows footage of Mickie James backstage as Mickie is grabbing her ankle as the referee checks on her. Paige then also shows Bayley, who is left holding her neck as a referee and medical personnel checks on Bayley. Paige then says that this must be a Handicap Match now as, with Alexa Bliss slowly sneaking away to avoid another beatdown, Paige would explain her actions, saying that, over a year ago, she was “the woman” who single-handedly erased the word “Diva” from the WWE dictionary. Paige then says that she was the “matriarch” of the “women’s evolution” and last week was a “statement” to remind everyone just who she is.

Paige then introduces her group as “Absolution” before Mandy Rose says that, before there was a “Boss” and before there was a “Goddess”, there was Paige, saying that she and Sonya did not forget. Sonya Deville then says that every woman has raised the game but nothing ever would have ever been raised had it not been for Paige. Sonya then says that they pledge their allegiance to Paige before saying that Absolution is a different kind of “women’s evolution”. Paige then asks if Sasha is going to join Mickie and Bayley or if “The Boss” is going to pledge her allegiance to Absolution, saying Sasha is either with them or against them. Despite her back being against the wall, Sasha Banks would refuse to join Absolution, doing her best to fight off the three women but the numbers game would overwhelm “The Boss”. Sonya then levels Sasha with a martial arts kick before Mandy hits Sasha with a double underhook facebuster and Paige puts the finishing touches on the assault with the Ram Paige.

“The Eater of Worlds” Bray Wyatt would then make an appearance on RAW. Bray says that, as a kid, he never celebrated holidays before saying that their entire world exists inside the confines of a “cardboard box” as they tell you “what to buy” and “who to be”, calling the fans “pathetic”. Bray then says that they “never listen” when he tries to show them the way, saying that their “suffering” brings him “joy” before saying that he can see them for who they truly are, saying that they are “all dead”. Bray continues, laughing maniacally as he repeats that they are “all dead”.

In the first match of a series of matches to determine a #1 Contender for the Cruiserweight Championship, RAW would see Akira Tozawa, Noam Dar, Rich Swann, and Ariya Daivari would face off in a Fatal 4-Way Match with the winner facing the winner of next week’s Fatal 4-Way Match. At the end of a wild match, it was Rich Swann hitting Noam Dar with the Phoenix Splash, pinning Dar to pick up the win, coming one step closer to becoming the #1 Contender.

In a rematch from last week, “The Empress of Tomorrow” Asuka would go one-on-one with Dana Brooke. In a blink of an eye, Asuka would lock in an armbar on Dana Brooke, making Dana tap out to pick up an impressive win. After the match, Absolution would come out to ‘introduce’ themselves to Asuka as Paige, Mandy Rose, & Sonya Deville surround the ring but the trio would not attack as Absolution lets “The Empress of Tomorrow” leave the ring with Absolution not taking their eyes off of Asuka.

This brings out Finn Balor, who makes his way to the ring to confront Kane. The confrontation is then turned into an impromptu match as Finn Balor would go one-on-one with Kane. During the match, the fight would spill to the outside where Kane would grab a steel chair, using the chair against Finn Balor to end the match by disqualification. Back in the ring, Kane would continue to use the steel chair to punish Finn with repeated chair shots to the back. Kane then places the chair around the neck of Finn Balor before Braun Strowman marches down to the ring with revenge on his mind. Kane would catch Braun with a chair shot to the back but Braun would shake off the chair shot before teeing off on Kane in the corner.