What are the qualifications for calling a movie “great”? Even trickier would be the qualifications needed for calling a movie “greatest of all time.” On that note you’ll have a lot of movies tossed out for contention: City Lights, The Wizard of Oz, Gone with the Wind, Godfather (either the first or second). I think I could make a pretty good case for Raiders of the Lost Ark, and I’m sure someone out there would try and argue for Titanic. Someone even more pathetic might try and say it’s Avatar.

Casablanca is the greatest movie ever made. For reasons within and without the picture itself, Hollywood will never better it. 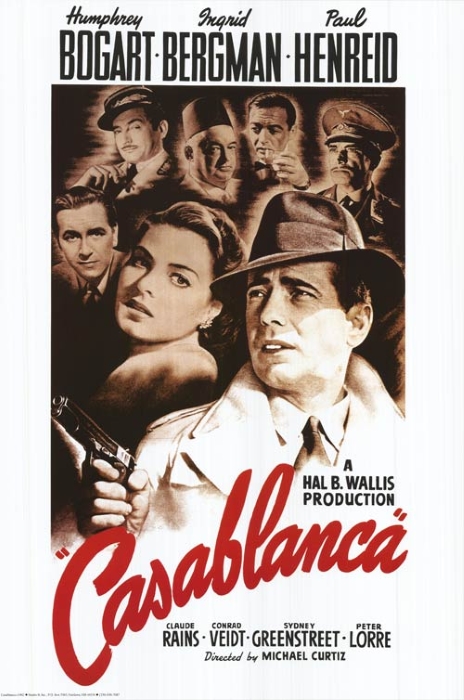 For one thing, there’s the underdog role the film had during production. Casablanca was not thought of as a special movie when it was being developed by Warner Bros. It was an A-list film with top stars Bogart and Bergman in the lead, but no one expected it to amount to much; it was a contractually obligated release, nothing more. And, upon release, it performed only adequately. It would take some time for people to notice it, and the tide turning in World War II helped it to gain a second look from the public.

Speaking of, one of the unsung virtues of the movie is how it explored the role of the United States in the Second World War. The movie was released a year after Pearl Harbor, but it is set just before the attack. Before the Japanese struck, America was neutral in the war, preferring to let Europe fight amongst themselves. Meanwhile, Rick owns a cafe in Casablanca where the same sense of isolationism and neutrality is the order of the day. Nazis and freedom-seeking Frenchmen share the space and Rick more than once reminds us that he doesn’t care about anyone but himself.

Then Isla walks in.

Rick’s old flame is with a French resistance leader and they—like everyone else in Casablanca—are seeking a plane ride out of town. The bitter feelings Rick has toward the woman he still cares for eventually break his cynical heart and he helps Isla escape. Just as America came to realize she could not sit on the sidelines when there was a cause worth fighting for, Rick realizes that he really is—as Louis pegged him—a sentimentalist at heart, and not as selfish as his outer shell might try to project. The story is simple and the allegory just slight enough that you might not even bother noticing it; the movie certainly doesn’t hit you over the head with it.

Looking at the movie with a passing glance, you might wonder how it came to be so revered, but it’s a thousand little things that add up that elevate it beyond all others. 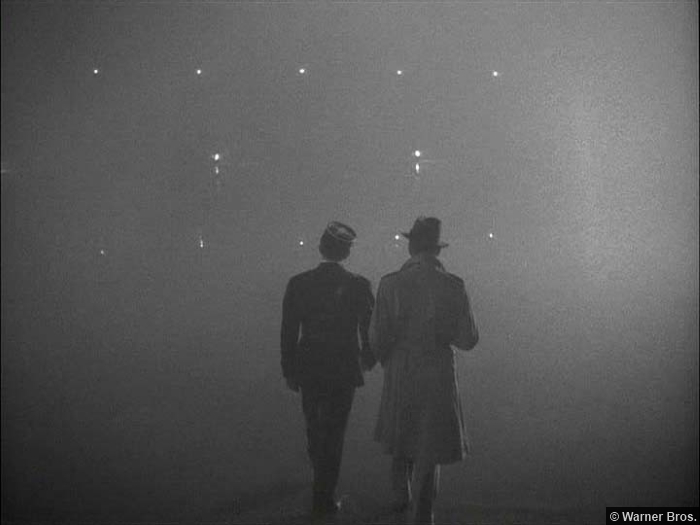 THE VISUALS, while never breathtaking (it’s filmed entirely on a backlot), are so beautifully shot you can’t help but admire them. There’s a dash of German expressionism in it, as well as a healthy dose of noir in the lighting, despite the story being far too romantic for a noir. Director Michael Curtiz and cinematographer Arthur Edeson (who had just shot the noir hit The Maltese Falcon) frequently used shadows and darkened rooms at just the right times to enhance the moments and convey the feelings of the characters without the need for dialogue; it’s never overdone and it’s never pretentious. It lends an artistic flair to the movie that never distracts. Ted Turner wanted to colorize it, but that’s blasphemy: The movie was born and bred in a black and white world and uses its lighting and photography in a way that requires the contrasts of black and white.

THE MUSIC is one of the movie’s greatest achievements, with “As Time Goes By” a big reason why. A nostalgia-laced tune in an era when nostalgia was not a common trope, the lyrics are positive and joyful but Sam sings it with melancholy and heartbreak. In the movie, it’s the “our song” of Isla and Rick, and one which Rick forbids Sam from ever playing in his cafe…until Isla walks in and obliviously requests it. It appears a few times in the movie and each one intercut with shots of the leads looking morose. It endures beyond the movie, however; before Casablanca, the song was barely even a modest hit, but thanks to its usage in the movie, it is regarded now as one of cinema’s greatest theme songs.

THE SCRIPT is remarkable. Literally: There are an embarrassing abundance of oft-quoted one-liners. They happen so frequently it’s almost a distraction to a modern viewer. These are the lines that you know by heart but perhaps didn’t know their source…

“Here’s looking at you kid.”

“I am shocked SHOCKED to find gambling happening at this establishment” (followed immediately by “here are your winnings, sir”).

“If that plane leaves the ground and you’re not with him, you’ll regret it. Maybe not today, maybe not tomorrow, but soon and for the rest of your life”

“Where I’m going, you can’t follow. What I’ve got to do, you can’t be any part of, Ilsa. I’m no good at being noble, but it doesn’t take much to see that the problems of three little people don’t amount to a hill of beans in this crazy world. Someday you’ll understand that.”

“Round up the usual suspects.”

“Louis I think this is the beginning of a beautiful friendship.”

Even without the memorable one-liners the script is phenomenal. There is no single wasted line, no bit of dialogue that should have been cut. You’re given all necessary information about the plot and the characters and their motivations and the stakes—everything you need—through natural dialogue and witty banter.

Casablanca works because it wears its emotion on its sleeve while not limiting itself to superficial feelings and expressions. It has an engaging story, sharp dialogue, memorable moments, and charming characters, but underneath it all is a story with a strong purpose: Some causes are worth sacrificing for.

America was only one year into World War II when the film released. At the time, cinema-goers didn’t know if they would prevail or if the Nazi banner would fly over the world. That idea is conveyed in the movie, as Rick describes his initial romance with Isla as a “story without an ending.” In the end, the “ending” of their story is that Rick can no longer force himself to stay on the sidelines. He will give up his love and enter the fight. He enters the literal fog ahead of him, side by side with the Frenchman (played by English actor Claude Rains), confident that beginning their beautiful friendship was the right choice.  As history showed, America siding with the French and English in fact was the move that turned the tide of the war.

Thus now we can look back on Casablanca as a slightly-anachronistic allegory for the moment when World War II swung in favor of the good guys. We can look back on it as an example of depth and substance in a movie not being overshadowed by the charm and melodrama on the surface. Is it big? Is it epic? Is it groundbreaking? No. But it’s flawless. It’s beautiful. It’s romantic. It’s funny. It’s exciting. It’s a movie whose acting, music and visual flourishes elevated it beyond its peers. It’s a movie that holds up, even seventy-five years later, as worth experiencing, whether it be the first time or the one-hundredth.

And as time goes by it will remain the greatest movie of all time.