Bray was brought in to be the next Undertaker. He was to be this generation’s spooky, other-worldly phenomenon. Now, after a few years on the main roster, and as we approach his third WrestleMania, the question on the fans’ minds is: “What happened?” How did he go from being “the next Undertaker” to…whatever he is now. He’s basically a spookier Tugboat. He’s big, somewhat menacing, but no one buys him as a threat anymore. What happened? 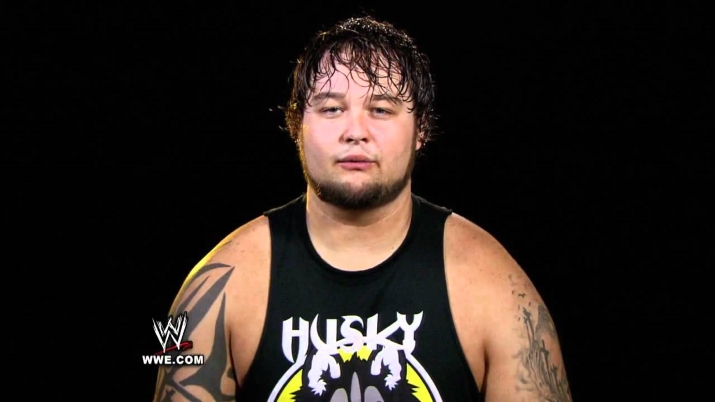 As you can see, the name was apropos. The son of WWF’s I.R.S. was a thick country boy with a lot of upside but not a lot of immediate viability. He was sent down to Florida, to WWE’s developmental league FCW (the precursor to NXT) in order to improve his conditioning. Before leaving he promised Vince McMahon he’d see him again. Once in Florida, Harris did more than work on his cardio; he completely revamped his character, becoming the Cajun Cultist Bray Wyatt.

Wyatt was a brilliantly conceived character, almost immediately. Wheras Husky Harris was awkward, Wyatt was instantly confident. Harris would work a big man style but his look never felt menacing. Even with a beard he had such a baby face, giving away how young he still was. As Wyatt, however, his look totally changed. A fuller beard, longer hair, that fedora and Hawaiian getup made him into a brand new man. And the crowds responded, which they never did for Husky Harris.

What’s interesting is the fact that Wyatt was sent to Florida to improve in the ring; WWE didn’t say anything good or bad about his character, but when he became Bray Wyatt, suddenly his character overshadowed his in-ring chops. When he went down with a pectoral injury Wyatt didn’t disappear from NXT TV. Instead he recruited Luke Harper and Eric Rowen to form the stable, The Wyatt Family. Bray was able to rehab his injury while perfecting his killer new persona.

Harper and Rowen won the NXT Tag Titles, with Bray acting as one part manager and one part stablemate. It wasn’t long before Vince and co. took notice and made plans to call Wyatt and his family back up to the main roster. The former Husky Harris was right: He had told Vince he’d make himself so good Vince would have no choice but to notice him, and notice him he did.

WWE ran vignettes hyping the Wyatt Family’s debut and finally revealed them to the worldwide audience in the spring of 2013. Wyatt began a feud with Kane that culminated in an Inferno Match at SummerSlam that year. The match was dog ugly and a few of the smarkier fans chanted “Husky Harris” at Bray, but it wasn’t too much longer that Wyatt won them over due to a magnetic personality and a very charismatic promo-style. He spent the fall feuding with CM Punk and Daniel Bryan before recruiting Bryan into his Family at the turn of 2014.

That led to one of the most memorable moments in Raw history, as Bryan turned on Bray inside a steel cage and led the entire arena in Yes chants.

Still though, Bray defeated Daniel Bryan at the 2014 Royal Rumble and entered a feud with the Shield, facing them at Elimination Chamber in February. The match was arguably the best of the year and once again The Wyatt family was victorious, as Bray pinned Roman Reigns following a Sister Abagail. Wyatt looked unstoppable and his workrate had produced back-to-back match of the night contests, silencing all criticism that said “he’s a good character that’s bad in the ring.” With WrestleMania looming, Wyatt looked ready to cement his place as this generation’s Undertaker, a moniker that was already buzzing around him.

This is the beginning of the end for Wyatt’s seemingly unstoppable forward momentum. It is here that the pattern for Bray Wyatt emerged, and that pattern has turned into a rut that he can’t seem to escape. It started with Wyatt drawing first blood against Cena, costing him the title in the main event of the Elimination Chamber PPV. It continued with a buildup to the big WrestleMania match, which would be Wyatt’s first as well as the first non-title, non-main event Mania for Cena since winning the title at Mania 21. A lot was at stake for both men, but especially for Bray. Though he’d been on a hot streak he was still a new talent and as such was very fragile. Wyatt of course lost to Cena, and vowed revenge at the next, and lesser-watched PPV. He got his revenge at Extreme Rules only to then lose the rubber match a month later. After Cena, and the booking around him, was done with Wyatt, the charismatic cult leader had lost a LOT of his shine.

He had a go-nowhere feud with Chris Jericho that summer that the crowd never really got into. He had a hot feud with Dean Ambrose that fall that ended in the most asinine way imaginable, with Ambrose losing via exploding TV. Remember that? Remember when Dean did something stupid?

After that Wyatt had a big showing at the 2015 Rumble before he was ceremoniously dumped by the tandem of Big Show and Kane. To be fair, everyone who fans loved was eliminated by Big Show and Kane in that Rumble match. Best not to dwell on that one.

That led Wyatt to regroup and call out the Undertaker himself. This is a year after both lost at WrestleMania. Undertaker, who was partially defined by his undefeated streak at the big event and Wyatt, who is often talked about as the next generation of Undertaker, were set for a match at the biggest show of the year. But since both lost the year before a lot of the sizzle was taken out of the contest. Not to mention the fact that Undertaker stayed off TV in the buildup, leaving Wyatt the task of having to carry the feud all by himself…which he did, masterfully.

And then he lost in a fifteen minute slog of a match.

After losing to Taker, and without any way of even getting his win back, Wyatt turned his attention Ryback. Talk about a step down. Even though Wyatt beat Ryback it was clear he had lost so much momentum he wasn’t the same superstar he had been. Certainly he wasn’t as hot as he was in the run up to WrestleMania 30. That loss to Cena really took the wind out of him and it took him a year to recover. Losing to Taker revealed him, in fans’ eyes, to be a paper tiger, all bark and no bite.

Wyatt meandered through the rest of 2015 without any clear direction. He feuded on and off against Roman Reigns before re-attacking Undertaker and Kane. That set up a match at Survivor Series, which—surprise—Wyatt lost.

As we approach WrestleMania 32 Wyatt currently lacks a feud, a direction, or even a place on the card. It looked for a time like he might take on Brock Lesnar but those plans were scrapped and now Lesnar is facing Dean Ambrose. At this point it looks like he might get stuck in the catch-all Andre The Giant Battle Royal. That would be a tremendous step down from facing Cena and Undertaker in back to back years.

After three years on the main roster it’s clear that Bray isn’t going to be the next Undertaker. At this point he’s barely the next Kane. If he’s lucky he’ll be the next Jake the Snake: A charismatic villain that is just credible enough to give a real superstar a decent win.

Or…WWE can make some changes. They can do somethings to rekindle the fire in Bray Wyatt and make him the new phenom he has the potential to be. What can be done? Here’s a few ideas…

This is a very unlikely solution, especially with so many legit names on the injury list; WWE needs as many “names” as they can get to work the house show circuit (which is the bread and butter of their income). The only way Wyatt would go to NXT is if they brought him back once a month for the TV tapings only. But as cool as that would be to see him return “home” it really wouldn’t help matters except to give him a fresh set of opponents. He wouldn’t work NXT’s touring, because he’d still be working on WWE’s house show circuit. He’d be like Zack Ryder who only tags with Mojo Rawley on NXT TV tapings. Still, if it were to happen, it might give him a chance to experiment with new ideas for his now-stale character. This would only be a short-term solution. Something still needs to be done with him on the main roster…

What Wyatt needs, is the same thing most of WWE’s top talent needs. He needs more than three hours’ notice on the direction of his character. Wyatt is a character that works best when he has a few months to build up to a feud. His feud with Kane, Bryan, Cena and Undertaker, though half of them ended in disappointing losses, still were all excellent “feuds” because there was enough time devoted to them to allow Wyatt the opportunity to cut sharp, focused promos. Wyatt is at his worst when he has no direction but is asked to cut a 10 minute promo nonetheless. He meanders and talks in circles, and the audience has wised up to that. On the other hand, when he has a clear focus, his promo skills are among the best today. Give him a multi-month plan and let him slowly get a feud over.

GIVE HIM A TITLE

Count me among those who thought Wyatt should have won the WWE Title at the Rumble. He would have been a great champion, even if his reign ended at WrestleMania (as all heel championship reigns should). Either way he needs something to give him some focus, and if its not a good guy to attack, it can be a title to defend. Some argue that Wyatt’s character doesn’t need a title, since his shtick is all about attacking and going on the offense, whereas having a title is literally all about “defending” that title. That’s a fair point but Wyatt can still work with a title, provided he makes it a prize that he knows the goodguys want but that he doesn’t want to give up.  It doesn’t have to be the WWE title, either. An IC title run can work if WWE Creative gets behind it. On the other hand…

You could just turn him. I mean how many good guys are left for him to face? Usually when a heel runs out of opponents they turn him babyface (and vice-versa). You may think Wyatt’s persona is incompatible with a babyface run but he cut a brilliant babyface promo on his last night in NXT. A babyface Wyatt can be a revolutionary looking to bring down the system from within. That might sound heelish but it all depends on who the “system” and the “establishment” is. With the right villains, Wyatt could be very over as a babyface and such a change would definitely provide him with a fresh start to a currently-stagnant career.

Hopefully WWE has plans for Bray Wyatt. Hopefully they see the potential in him, despite some recent setbacks. Hopefully he has a killer showing at WrestleMania next month and, beyond that, a great 2016. He’s certainly a character worthy of a great new year.