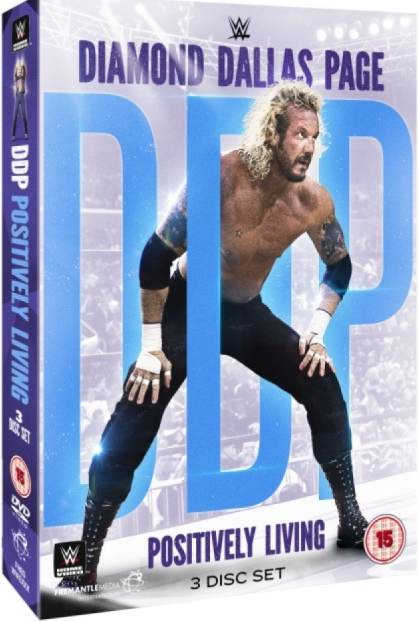 In the review of Randy Orton’s profile DVD, it started with mentioning that as DDP is so synonymous with the cutter, it was going to take someone special to be able to perform the move and make it his own, which is what Randy eventually did.

Now it’s the turn of the man probably most associated with the move invented by Johnny Ace and it’s interesting to see the parallels with Orton in so much where it was the move getting the guy over first of all (though, to be fair, both men got over in their own right, despite the RKO again becoming more over than the guy performing the move in recent times).

DDP is probably the last of the guys from the pre-Monday Night War era to be getting a career retrospective release and the guy has led an amazingly colourful life before, during and after his wrestling career.

The set sees us meet up with Page in his peak-Yogi period and the man himself talks us through his childhood (which is a given for these formats), his late-teens, owning a nightclub, getting to know the wrestlers (long before he was in the business himself), being at WrestleMania VI because his car got booked for the show and they needed a driver, the Power Plant, being a manager in the AWA, moving to WCW to be a manager / commentator and then, at the age of 35yrs old, deciding to train to be an in-ring talent at an age where most guys are hitting their peak as a wrestler.

WWE named this collection Postively Living and that’s no gimmick, brother. DDP oozes positive energy from every pore and it’s easy to be caught up in it yourself. The stories are hilarious, heartfelt, emotional or a combination of all three. The process of coming up with the Diamond Cutter (credit to Johnny Ace, Bobby Heenan and William Regal) and how it evolved into being a move that could be hit from a multitude of angles, positions and as a sweet counter. Not going to spoil what is said, but Jake Roberts gives the Diamond Cutter the best possible compliment one talented performer could give to another when describing it.

The talking-heads are also well worth a listen, along with the obligatory Dusty Rhodes impression, which always bring a smile to my face.

Of the matches on show, all but one take place in WCW over an eight-year span and each one of them is worth watching to see the in-ring evolution of the guy who should have come in during the invasion angle with People’s Champion gimmick intact instead of the ridiculous stalker angle they saddled him with. DDP would have been over HUGE with WWE audiences had he been allowed to come in as a face instead of the entire WCW / ECW contingent needing to be heels for the storyline they went with.

Feelgood stories in wrestling are relatively rare, especially with the guys who were active in the 80’s, but this is the best example of feelgood storytelling as life, especially with the advent of DDP Yoga and how many people (wrestlers and non-wrestlers alike) it has helped. Arthur Boorman is probably the most famous non-wrestler (and if you haven’t seen his story, look it up on YouTube), while the work he has done with Scott Hall and Jake Roberts is nothing short of saintly.

His induction into the WWE Hall of Fame is richly deserved for that alone, even before you get to his contribution to the wrestling industry as a whole. Speaking of which, another nice little nugget is the geniune emotion shown when Page finds out he’s going in after seeing Hall, Jake and Nash go in the previous years.

All of the matches are worth a watch for various reasons, with the bouts against Eddie, Savage, Hogan, Goldberg, Hennig, Raven, Sting and Bret being the standouts. Plus, it’s nice that WWE end the matches with his crowning WWE moment at WrestleMania X8.

The documentary is the real selling point and for someone who has had such the life Page has had, the one-hour running time for that is enough to barely scratch the surface of each period in his life. They (being WWE) really need to have these run for at least 2hrs, if not 3hrs, for guys like this.

A great release and worth your money if you don’t have access to the WWE Network. That being said, there should have been a special edition of WWE Top 10 to showcase the best Diamond Cutters of all time.