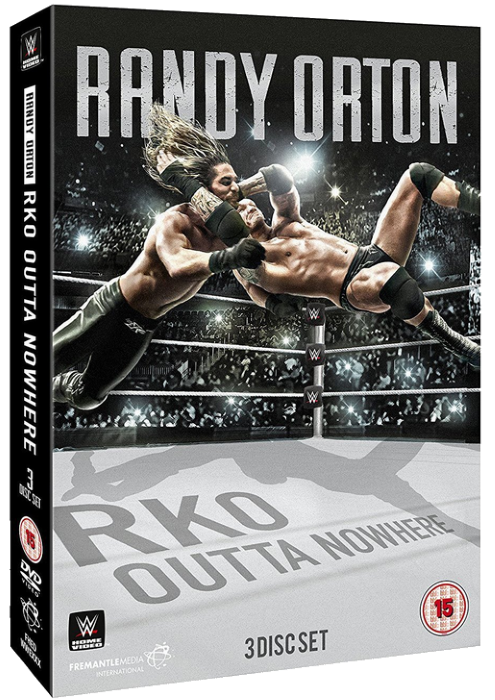 With DDP being so synonymous with the cutter, it was always going to take someone special to be able to perform the move and make it his own. Randy Orton did that and did it so well that for a fair percentage of the fans, if they saw someone on the indy scene do it, they’re more likely to call it an RKO than a Diamond Cutter (which, ironically, is what Page did in WCW as it relates to the Ace Crusher).

This set chronicles Randall Keith Orton’s journey from his beginnings in OVW, on to his call up to the main roster and his debut on Smackdown (against Bob “I’m going to chop respect into you” Holly), through the growth of his career as part of Evolution and on to his current main-event veteran status.

Each match is preceding by a short introduction where Orton discusses an aspect of why the match is taking place. The match is then shown in its original format, commentary and all (so yes, you do have Jim Cornette calling Kenny Bolin a bastard, though the pay-off to that is the 4:3 ratio on the earlier contests).

Randy is a very affable subject and shows great respect for the business, for his position in the company, the veterans who helped him come up, while the matches have been selected very well to maximise the different opponents Orton has faced over the years.

What I mean by that is there is very little overlap with opponents (which has been an issue in previous career retrospectives) and there is little repetition in match types. Of course, there are a lot of singles matches, but gimmicks and / or a title being on the line make up for that.

There isn’t a dud match on the disc, with some of them being absolutely epic in scope or execution.

Watching Randy in his early outings is a nice trip down memory lane and makes you realise he has been busting his arse for the better part of 16yrs now. A dark match against long-time indy talent Flash Flanagan sees Orton pull out a slingshot Wheelbarrow Suplex that I’d never seen before and his contents against John Cena, Christian, The Shield, HBK, CM Punk, Jeff Hardy (at arguably Hardy’s peak of popularity) are great.

This is a fantastic release and I was genuinely surprised at how likeable Orton was during the talking-head segments before each match.

An easy recommendation as a must-buy for your collection, with the only disappointment being that there is nothing from his great feud with Hall of Pain-era Mark Henry.