Fargo S03E03 Review: The Law of Non-Contradiction – Odd episode that shouldn’t work, but does.

The best thing you can do if you’re lucky enough to have Carrie Coon on your show is wind her up and let her go. The Leftovers has demonstrated this on multiple occasions, beginning with season one’s episode “The Guest.” Fargo has already learned that lesson, devoting the entirety of this season’s episode 3 to Gloria’s quest for answers regarding her stepfather’s murder.

Some viewers may have been frustrated with this, as it seemingly has no connection to the main mystery. Yes, it has something to do with Ennis, the murder victim, but his murder was a case of mistaken identity. So what to make of this episode? Well, the writers of the series often put in little Easter eggs for Coen Brothers fans, after all, and in Gloria’s quest, I couldn’t help but be reminded of the dinner Marge Gunderson has with her former high school classmate in the movie Fargo. You know, the one where he tells her that she’s such a super lady. On the surface, it seems to have little to do with the kidnapping plot, but the fact that someone she trusted lied so openly to her makes her reconsider that someone else, mainly Jerry Lundegaard, may have lied to her as well. So this episode could end up having something to do with the main plot or maybe they just wanted to show off what Carrie Coon could do. Either way, it was a great episode. 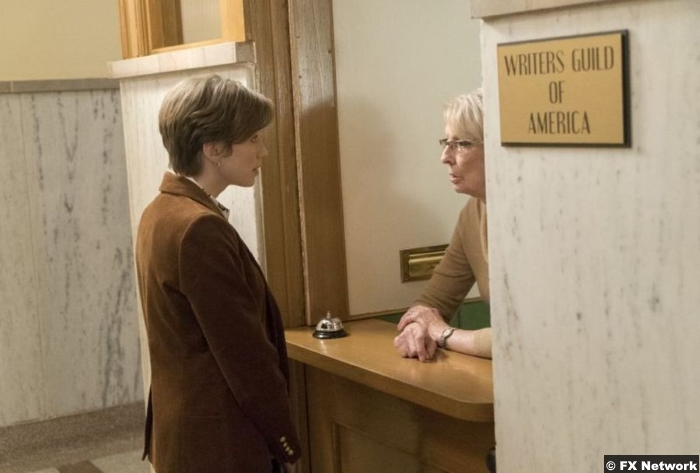 Gloria flies out to Los Angeles to retrace the part of Ennis’s life when he was sci-fi author Thaddeus Mobley. We get to see that life in flashbacks. It was not a great life. Sure, he had early success as a book author, but he was quickly preyed upon by sleazy Hollywood producer Howard Zimmerman. (Speaking of Easter eggs, this storyline is very shades of Barton Fink.) Zimmerman dangles a lovely young lady, Vivian Lord, as a carrot to young Thad, but all the writer gets is the stick. He ends up investing his full book advance in a movie version of his work, but really most of the money, if not all of it, goes up Zimmerman’s (or Vivian’s) nose. When Thad realizes he’s been had, he beats Zimmerman brutally. He then decides to skip town. Back in his motel room, when he’s getting his stuff together, he panic-vomits. On the toilet is a mark of its maker: Dennis Stussy and Sons. The D is nearly worn off, though, giving Thad his new identity. And sealing his future fate—if he’d gone with Dennis, then Maurice would never have seen an E. Stussy in the phonebook page he stole. 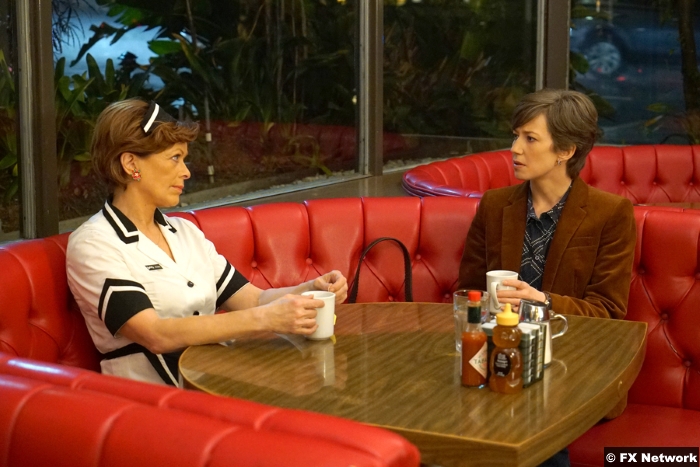 Interspersed with this story is the story of Gloria finding it out, along with animated sequences illustrating one of Mobley’s stories. Stories on stories on stories. That’s what this episode ultimately is, as much as it may seem like a random assortment of scenes. This episode should not work, but it does and although a large part of that has to do with the greatness of Carrie Coon, there’s some other magic there pushing it along.

Like, there’s an oddness to the Los Angeles scenes that make them seem not quite real—more like something in a dream. Gloria meets a man, played by Ray Wise, on the airplane and later runs into him in a bar. He’s real, I think, but he has the air of a fairy godfather, dispensing wisdom on divorce. There’s also a Santa convention in town and many of the attendees are staying at the motel. One of them steals Gloria’s luggage when she first arrives. The police officer who responds is played by Rob McElhenny, making this the second appearance by an It’s Always Sunny in Philadelphia cast member (Glenn Howerton appeared in season 1). We can only hope that Charlie will be next. 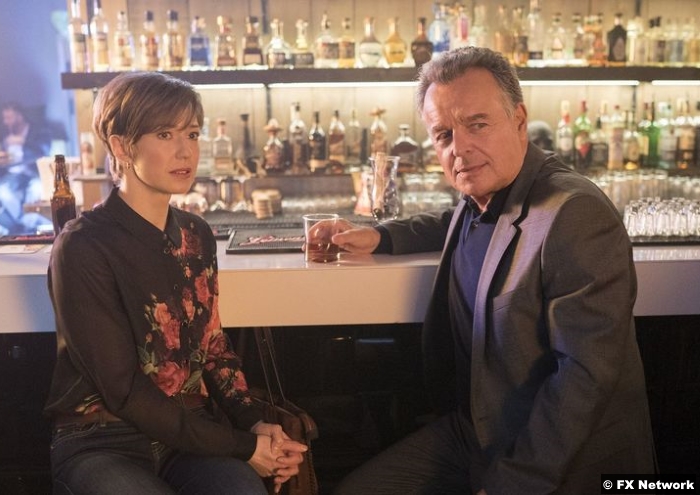 Despite Gloria’s trip out west, she learns only one real fact related to Ennis’s murder—where he got his name—while she’s out there. The fingerprints found in Ennis’s house are identified (as Maurice’s) but that happens while she’s out of town. So what was the point of this episode? Maybe it was just to tell us a story. The series, like the movie, famously claims to be based on a true one. But sometimes we just have to find the truth ourselves.