Fargo S03E02 Review: The Principle of Restricted Choice – Getting down to business

There are certain things you can never anticipate. Like that your simple plan to get some extra scratch will involve you and your girlfriend—excuse me, fiancé—killing a man with a falling air conditioner. Or that the money launderers with whom you’ve become involved are a lot scarier than you initially thought. Or that you’ll have to write the words “used tampon” in your TV reviews that week.

It is a truly a world of wonders. My having to write that phrase is because of Nikki and Ray’s next brilliant plan. I really don’t know why they didn’t go with this one to begin with—it would have been much easier. (The summary of every season of Fargo!)  But before we get back to that, we’re back with Gloria, who is still puzzling over the mystery of what happened to her stepfather and now, the mystery of whom he was. I mentioned last week that she found some sci-fi books in a lockbox. It seems that her codger of a stepfather was once Thaddeus Mobley, award-winning author. Why he would reinvent himself is puzzling, but of course, not as puzzling as who killed him. Not a mystery is how he died—he was asphyxiated by having his nose and mouth glued shut. YIKES. 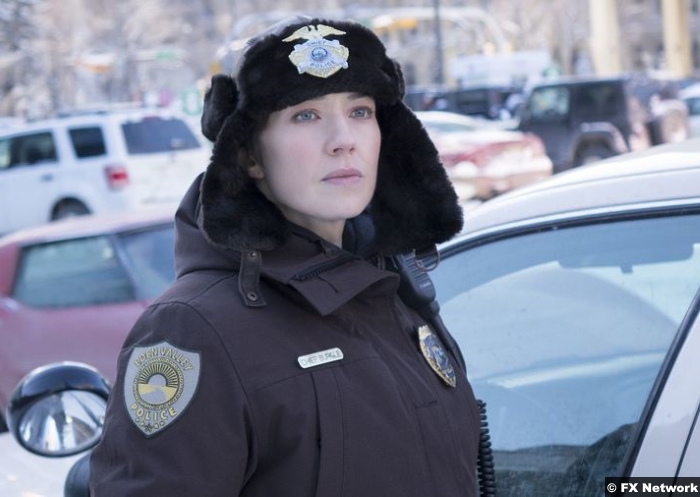 Gloria obviously wants to solve the case and she finds a good lead, when she learns about the mysterious guy who stole the page from the gas station phone book. However, she also has to deal with her boss, Moe Dammick (Shea Whigham). He wants her tiny department to be subsumed by the county, mainly because he doesn’t like the way she’s been running things. She still submits reports by Telex, for example, because she doesn’t like computers.

She may have a point there, since they lead to another character’s downfall. All poor Irv Blumkin, Emmit’s attorney, has to do is search online for the mysterious Varga and he invites doom. His computer network blinks out, which is ominous enough, but then he encounters two of Varga’s men in the parking deck when he’s leaving work. One of them, Yuri, is apparently the same man we learned about in East Germany last week, the Ukrainian girlfriend-killer. If we can say anything about their methods, it’s that they’re efficient. They dispatch of Blumkin quickly, by dropping him off the deck. I guess the theme for this season is look out below. 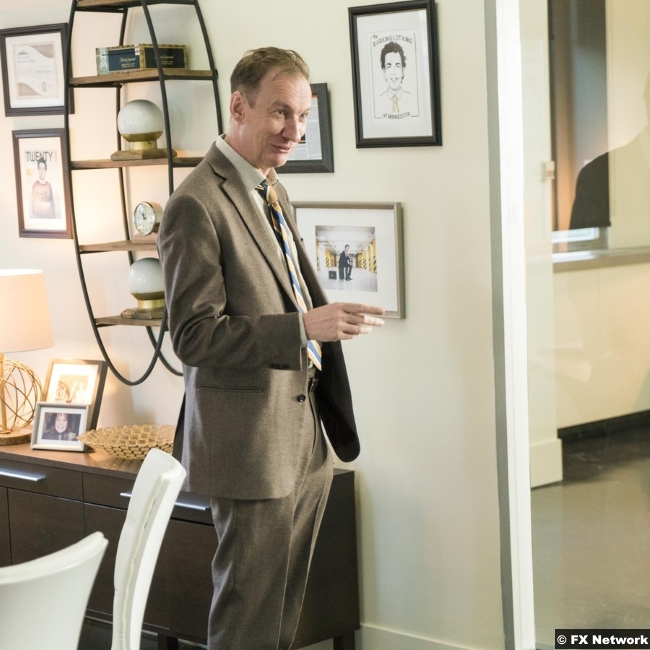 He had already pointed out the “unfathomable pinheadery,” to use Nikki’s phrase, of Emmit’s borrowing a million dollars from a man whose first name Emmit still does not know. That act is already coming back to bite Emmit. There is, of course, the matter of what happens to poor Irv, but Varga is starting to make his presence felt in the world of Stussy’s parking lot empire. He parks an 18-wheeler full of God knows what in one of Stussy’s lots, which Emmit must allow, despite the fact that it’s against code. He also takes an office for his men in Emmit’s business space.

His office is invaded and of course, now his home has been invaded, too. Nikki’s plan is that Ray will distract Emmit with a talk about burying the hatchet while she steals the stamp from his office. And their plan would’ve worked, too, had the stamp been in there. Instead, the framed stamp is no longer on the wall, replaced by a donkey portrait, which Nikki takes (incorrectly) as a personal insult. She defaces the painting with her own blood, leaving her…”paintbrush” in Emmit’s desk. 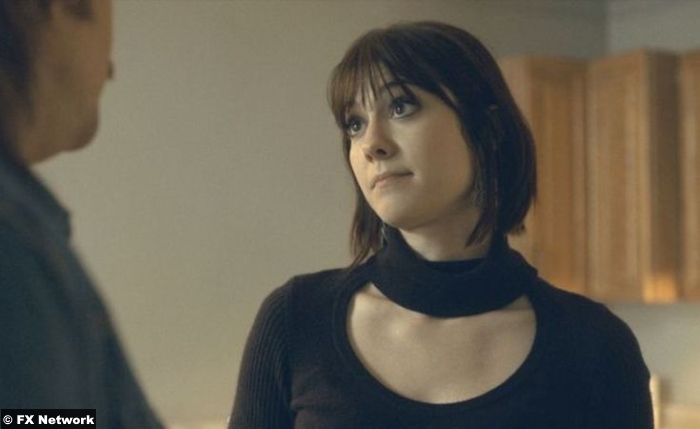 It turns out that the stamp isn’t on the wall because the housekeeper broke the frame and it’s being replaced. This is a very typical Fargo move, though—one simple misunderstanding leads to a personal affront and then the stakes are raised. The problem, though, is that bridge enthusiast Nikki is seeing everything as a card game and life doesn’t work like that. You can raise the stakes only so far before everything comes tumbling down.

We’re already seeing that in Emmit’s response, via right-hand man Sy. His meeting with Ray culminates in his smashing into Ray’s Corvette (and an unfortunate waitress’s vehicle, accidentally). Knowing Fargo, though, there are still collisions a-plenty, accidental and not so much, coming.

8.5/10 – Now that we’re getting the introductions out of the way, Fargo can get down to business. Last week’s episode wasn’t bad, but this week went a long way toward building my anticipation to see how it all works out.