I am, what they call, a millennial.

Born in 1984, my formative years were spent with TV from the early-to-mid-90’s. I still enjoyed reruns from old classics like He-Man, Superfriends and Ducktales, but the shows of my youth were Batman: The Animated Series, Darkwing Duck and, of course, Power Rangers.

Power Rangers premiered when I was in 4th grade. That’s the prime age for a show about superheroes, and since most superhero shows were based off of decades-old properties, anytime a new franchise became popular it was easily the talk of recess. Needless to say, Power Rangers was instantly-popular. I followed the show through every incarnation between its debut in the fall of 1993 to the end of the “Zeo” season, which wrapped up around Christmastime, 1996. By then I was in seventh grade and it was certainly “uncool” to be a Power Rangers fan in those days. In fact, I watched my final season in my bedroom with the door locked and the volume turned low. The next time new Power Rangers episodes hit the air, the show switched to “Turbo” and featured a cast of pre-teen children. That’s when I knew my time with the show was done.

I kept all my toys well into adulthood, though, and only sold them (in hindsight, foolishly) when I saw how much they were going for on ebay. I made hundreds of dollars but I wish now that I’d kept them. My oldest son is ten and he has loved Power Rangers for as long as he’s loved any TV show.  He’s watched much more than I have, and knows characters and events that occurred long after I moved on. I still prefer the original team led by Jason (and later Tommy) whereas he liked something called Jungle Fury or Dino Thunder…I dunno.

But I do know that when word came that a movie was being made, we both made plans to be there opening night. The cast was announced, and the names and Zords (taken from the original series) were eventually shown, giving me tingles I hadn’t felt since 4th grade. Now that it’s here, is it good? Nostalgia is everywhere in the movie, and that can easily cloud the judgement, but cutting through that, is the movie actually good? 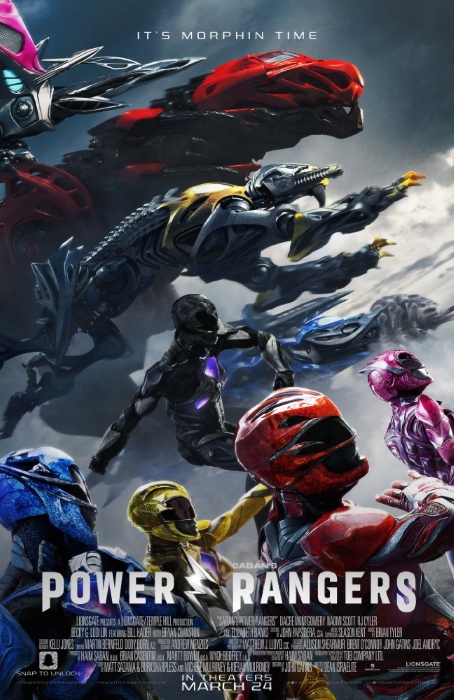 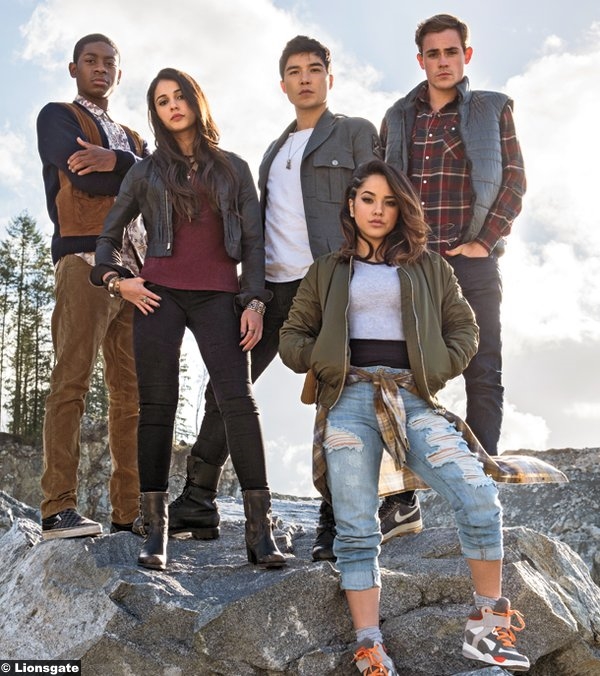 The Rangers were played by mostly-unknown actors, which means there was no bias for or against any one of them, either on the part of the screenwriters during development or the audience watching. Everyone was a clean slate and since a core theme of the movie was “five very different kids have to work in sync” it’s good that there wasn’t one big star among them to steal the spotlight.

Each of the five was given a clear and concise backstory and played their parts well. Billy’s the nerd on the autism spectrum. Jason’s the jock screwup. Zack’s the brash egotist whose projecting due to a sick mom at home. Kimberly’s the cheerleader who is growing out of the “little miss perfect” role without knowing who she is or what she wants to be. Trini is the “lost’ child, who has changed schools three times in three years and doesn’t want to play well in a group. Everyone has a clearly-defined personality which gives drama to the middle portion of the movie, where they have to learn to “become one.” It’s a cliched storytelling trope but because we’re given backstories and because the actors all do a great job with their material, it works. Considering that exactly zero of the five had any depth in the original show, it was a welcome thing to watch.

Basically the movie can be summed up as “What if the kids in The Breakfast Club became superheroes?” That’s a pretty intriguing premise and the movie does well with it in broad strokes. In addition, we’re given a new backstory to both Rita and Zordon, which improved upon the emptiness of their characters in the TV show. In this version, Rita was a ranger alongside Zordon, millions of years ago, but she turned on the team and wiped them out. Zordon was last surviving and hid the power crystals (which turn ordinary people into superheroes) on earth, intending for new heroes to rise and defeat Rita.

Once the prologue is finished, so is Rita’s character progression, but Zordon is given a nice little arc. He doesn’t start out the “wise old man” figure that he is from the opening credits of the original show. Instead he’s the ex-Red Ranger, forced to live in the ship/command center as a digitized face. Initially, he wants to use the five teenagers to draw their power so he can revive and take on Rita himself. It’s a selfish, prideful take on the character that initially surprised me but by the end I grew to appreciate it. Eventually, of course, he comes to see the value in the teens (whom he initially dismisses as untrainable and flawed) and sacrifices his chance to be revived to become the “wise old man” everyone expects him to be. I have problems with the screenplay, but the basic premise (again, in broad strokes) was good for an origin story. 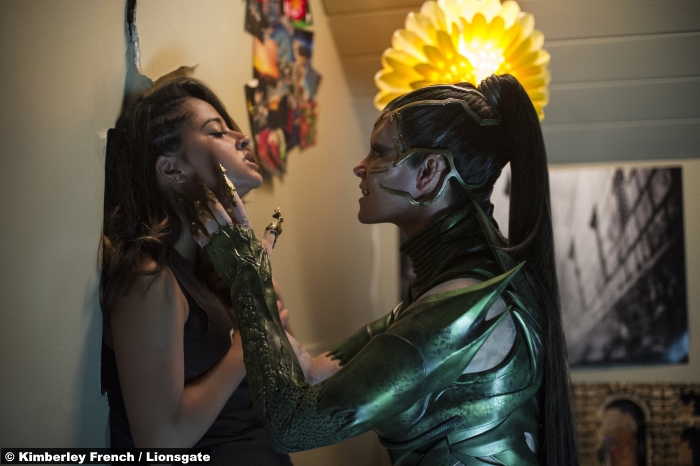 As a dad, part of me wishes the movie was a little softer for my 10 year old son. I took him and he enjoyed it, but Rita was a little too “villain from Ring” at times for him, and the language sometimes made me cringe. I recognize the first Power Rangers Movie (1995) was not what the film’s creators were going for, but I loved the 1995 movie so I’m not the most objective voice here.

Having said that, the movie IS rated PG-13, so that’s on me and any other parent of young kids who “really really really wanna go” as mine did. As a person who grew up with the series and is now an adult, I dug the movie as it was presented and appreciated the way they handled issues like bullying, autism, parent-child drama and such like. It wasn’t all dark and brooding either. This isn’t the James Van Der Keek/Katee Sackhoff fan-film; it has levity and camp and never forgets the ridiculousness of the concept. 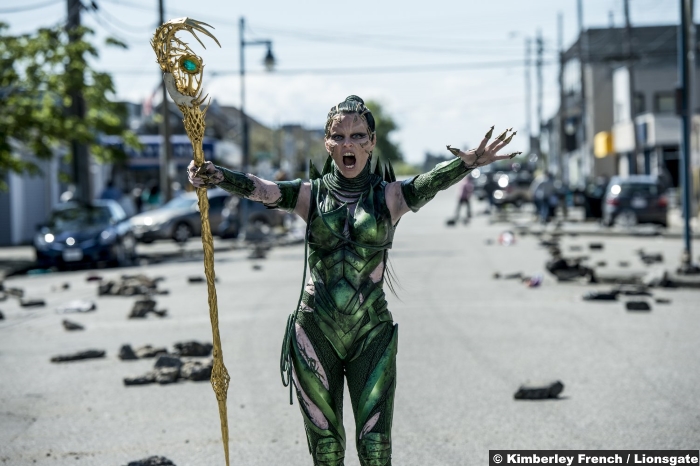 Some of the dialogue was cringe-worthy, and not in the “this is stupid fun” sort of way. Even though I smiled at the nods to the original series, they all stuck out like a sore thumb and if you watched the movie without any knowledge of the show, you might wonder why some lines were even uttered. There as no natural flow to any of them: Rita belts out her classic “Make my monster grow!” line, to a monster that had already been “grown” by that point. Of course, “It’s morphin’ time” is uttered, and even though it’s an eye-roller, it’s an iconic line that even non-fans know, so it had to be in there. At times the movie tried a little too hard with the one-liners, though. A few of them worked, but a lot of them fell flat. Others happened so quickly the audience in my theater was laughing at one line and missed the follow-up. Less should have been more here, but wasn’t.

This was really only a problem for the final act, as the action—which featured a giant monster battling giant robots—was always too zoomed-in to appreciate and had too many quick-cuts to understand. The CG was good, I thought, so I was disappointed that the way it was actually staged and “shot” (rendered, I suppose) never gives the audience a chance to appreciate the spectacle of such a “giant” fight. It’s crazy that the original show (which often featured 5’11 men in costumes) managed to convey scale better than this movie did. Furthermore, there was never a clear, good, in-daylight look at the Zords. They kept being hidden, either by camera cuts or lighting, which—again—is weird, considering the effects were well done. They just weren’t allowed to be appreciated thanks to bad directorial choices. 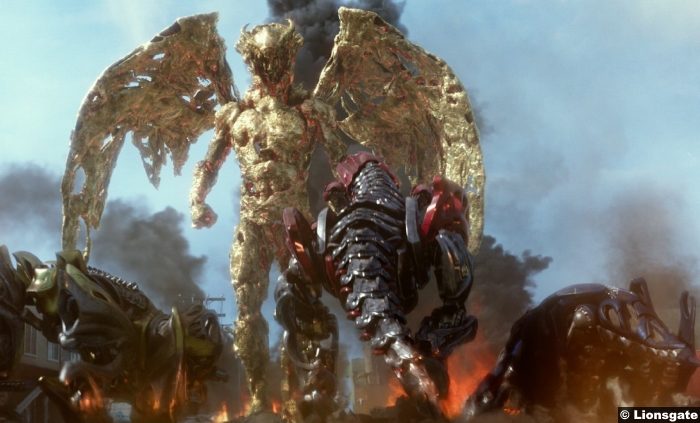 The ranger suits are too busy, but that’s been known for a year now. Still, they could have been worse. The real criminal here is the design of Goldar, the Zords and the Putties. Goldar in the original series had style. He was campy, yes, but there was at least something to his look. He was a monster with gold armor and giant wings. Look at him. Now look at the movie’s version. The new version is just a solid gold cardboard cutout. I don’t understand why they went with such a bland design. Same with the Putties: Granted, in the original series they were just guys in skin-tight grey spandex, but the show had a budget of like $3.95 an episode. This is major motion picture; couldn’t they have done more than just generic rock monsters?

The Zords, individually, were okay but if you never saw the show, would you know the yellow one in the movie was a sabertooth tiger? Would you know the blue one was a triceratops? Would you know the black one was a mastodon? Did that one even have tusks and a trunk? The only obvious ones were the T-Rex and Pterodactyl. When they became MegaZord is when things really took a nose-dive, however. The end-result is a robot that looked like a rejected design for Optimus Prime.

The original series was as low-budget and low-tech as it could be. I swear they just filmed the toys in many shots. But when the Zords became the MegaZord you could see how each one fit together to make the Mega. Not here. I’m sure they do all fit together, since you can buy the toys and do it yourself, but the design is so busy it just looks like a totally seperate robot, and not the fusing together of five distinct machines into one. The TV show actually took you through he transformation process, step by step, so you could see how it’s done. The movie just tosses the five individual Zords into a pit and then, there’s a kaboom, some fire and out comes the MegaZord. The movie’s take on it lacks the simplicity of the show. It’s the same problem I have with the Transformers in those movies. The design is all “too much” when sometimes simpler is better.

A lot of this film was well-done, and in fact it’s the parts that are hardest to get right (characters and story, in particular) that the movie does best. The parts that are easily handled (art-style, action sequence framing) are where the movie drops the ball the most. With rose-colored glasses on I’d give this movie and 8/10, but in reality I think it’s just a hair below that. 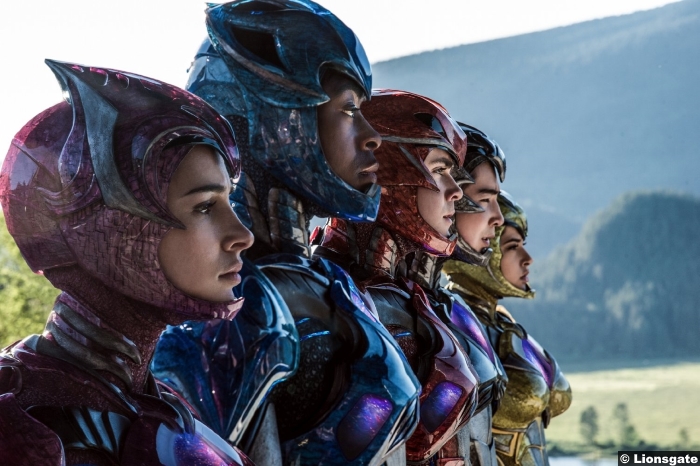 7/10 – Ultimately, this was a good first try and I look forward to the sequel, which hopefully with right a few of the easily-rightable wrongs.

Fans will enjoy it, but not as much as they might wish they did.