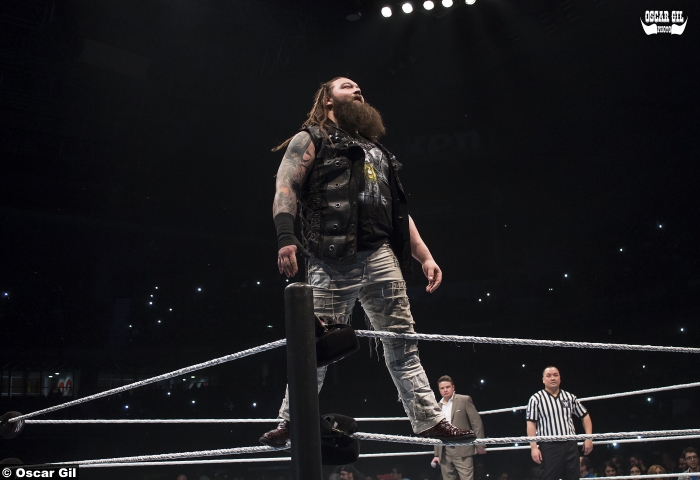 The Road to WrestleMania would take a dangerous detour for the Superstars of SmackDown LIVE as the seventh edition of WWE Elimination Chamber came to you, live on the WWE Network, from the Talking Stick Resort Arena in Phoenix, AZ. For the first time in two years, the savage Elimination Chamber Match would return to WWE as the “all-new” Elimination Chamber would decide who will be heading to WrestleMania as the WWE Champion to defend the gold against 2017 Royal Rumble Match winner Randy Orton on “The Grandest Stage of Them All”. After winning his record sixteenth World Title at the Royal Rumble by defeating AJ Styles to become the new WWE Champion, there would be little rest for John Cena as “The Champ” must step into the Elimination Chamber for the sixth time in his legendary career to put the WWE Championship on the line against former champion AJ Styles, “The Eater of Worlds” Bray Wyatt, “The Lone Wolf” Baron Corbin, self-proclaimed “A-Lister” The Miz, and Intercontinental Champion Dean Ambrose. In the Elimination Chamber Match, two of the six Superstars will randomly be selected to start the match as the other four Superstars will be locked inside their respective ‘pods’. Then, every five minutes, one pod will be opened at random and that Superstar will be allowed to join the match and this will continue until all four pods have been opened. With the richest prize in WWE on the line inside the demonic, steel structure, who will emerge from the Elimination Chamber having proven to the world that they have what it takes to not only survive the Chamber, but to walk into WrestleMania as the WWE Champion?

After demanding some competition a couple of weeks ago, SmackDown Tag Team Champions American Alpha may get more than they bargained for at WWE Elimination Chamber when they defend the tag titles in a Tag Team Turmoil Match against The Usos, Breezango, The Ascension, The Vaudevillains, and Heath Slater & Rhyno! In the unique Tag Team Turmoil Match, two teams will start the match and, whenever one team is defeated by either pinfall, submission, disqualification, or count-out, the losing team must return to the locker room and a new team will enter the match in their place. This trend will continue until all of the teams have entered the match with the last team left in the match leaving as the SmackDown Tag Team Champions. Can American Alpha survive the toughest title defense of their careers or will new SmackDown Tag Team Champions be crowned?

In what can be viewed as a dream match, WWE Elimination Chamber would be home to a one-on-one match that, just a few months ago, seemed to be highly unlikely. During a Steel Cage Match for the SmackDown Women’s Title back in December, the mysterious masked competitor La Luchadora would again get involved to help Alexa Bliss retain the SmackDown Women’s Title against Becky Lynch. However, this would lead to Becky unmasking La Luchadora to reveal that it was former five-time Women’s Champion Mickie James under the mask! The unhinged former champion would reveal that she aligned herself with Alexa Bliss because Alexa was the only one who remembered her accomplishments, declaring that it’s about the “reinvention of Mickie James”. This will all to a head at WWE Elimination Chamber when “The Irish Lass Kicker” Becky Lynch goes one-on-one with Mickie James.

After weeks of post-match attacks on both Kalisto and Apollo Crews, Dolph Ziggler would find himself on the receiving end of some payback at WWE Elimination Chamber as “The Show Off” would have to face both Kalisto and Apollo Crews in a 2-on-1 Handicap Match. Also at WWE Elimination Chamber, a bitter feud born out of jealousy and personal attacks would see the latest chapter written in the extremely heated feud between Nikki Bella and Natalya as the two Total Divas stars would go one-on-one.