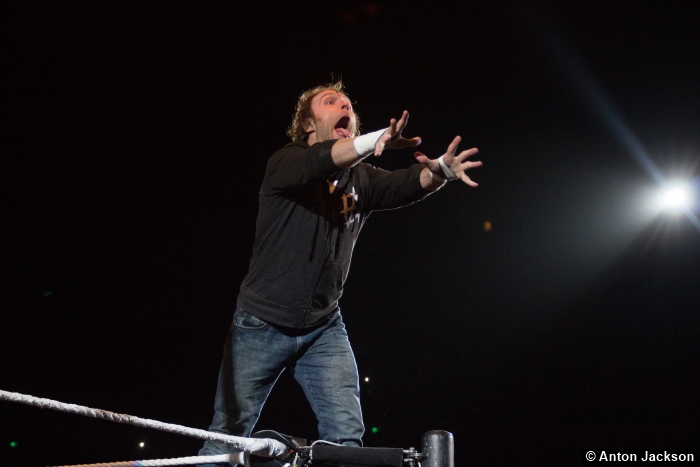 The sixth annual WWE Elimination Chamber came to you, live exclusively on the WWE Network, from the American Bank Center in Corpus Christi, TX. Ever since Seth Rollins turned his back on his Shield brethren Dean Ambrose and Roman Reigns to join The Authority nearly a year ago, the now WWE World Heavyweight Champion has had Ambrose and Reigns nipping at his heels with both men repeatedly having run-ins with The Authority’s centerpiece, but no Superstar has shown more reckless abandonment than Dean Ambrose as “The Lunatic Fringe” has went to great physical and mental lengths to take Seth Rollins down and, at WWE Elimination Chamber, Ambrose will get his opportunity to do just that when he challenges Seth Rollins for the WWE World Heavyweight Championship.

Throughout his thirteen year career in WWE, John Cena has been faced with countless brash, young Superstars who have thought they were the one to take the Cenation leader down once and for all and make a name for themselves in the process, but perhaps no up-and-comer has made a more memorable first impression than NXT Champion Kevin Owens. While his time in WWE is short, Owens’ time as a major player on the independent wrestling scene has made him no stranger to the wrestling business and, when he made his RAW debut a few weeks ago, the NXT Champion was not interested in becoming the next United States Champion, he was interested in making a statement. Kevin Owens did just that when he flattened John Cena with a Pop-Up Powerbomb and disrespectfully stomping his foot down on the United States Championship on two separate occasions. The latter of which may prove to be Kevin Owens’ biggest mistake given how much the United States Championship means to John Cena and, at WWE Elimination Chamber, Kevin Owens would get the unprecedented opportunity to fast-track his career in WWE when the NXT Champion goes one-on-one with United States Champion John Cena in a non-title Champion vs. Champion match!

In the other Elimination Chamber Match, the WWE Tag Team Titles would be defended inside the Chamber for the first time ever as six of WWE’s top tag teams would compete for the top prize in the tag team division as The New Day would step inside the steel to defend the WWE Tag Team Titles against Cesaro & Tyson Kidd, The Lucha Dragons, The Ascension, Los Matadores, & The Prime Time Players. Which tag team will reign supreme in the Elimination Chamber Match and who will leave Corpus Christi as the WWE Tag Team Champions?

The Divas Championship would also be up for grabs at WWE Elimination Chamber as Nikki Bella would defend the top prize in the Divas division against two very hungry and very determined competitors in Paige and Naomi in a Triple Threat Match. Also at WWE Elimination Chamber, two former NXT Champions would renew their rivalry from their NXT days as “The Man That Gravity Forgot” Neville would go one-on-one with Bo Dallas.