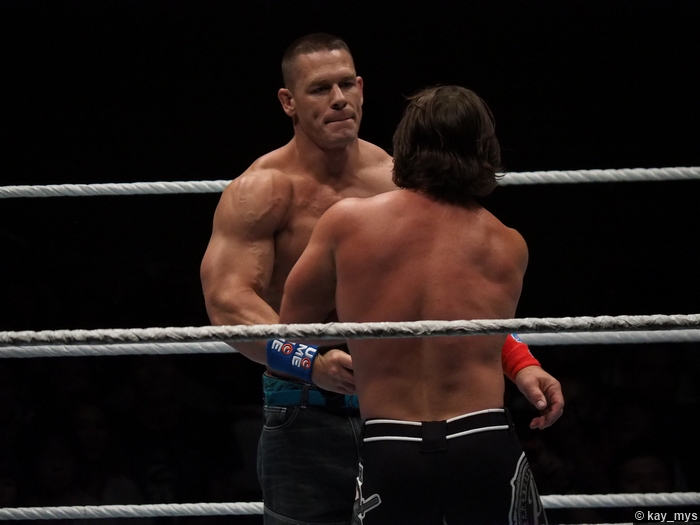 The 906th edition of WWE SmackDown LIVE was the final SmackDown LIVE of 2016 and it came to you, live, from the Allstate Arena in Chicago, IL. Arguably, no Superstar in WWE has had a better 2016 than AJ Styles. Having made his surprise WWE debut as third entrant into the Royal Rumble Match in January, AJ would go on to have one of the best first years in WWE history, making his WrestleMania debut against Chris Jericho before making a major mark in WWE by defeating John Cena on multiple occasions before winning his first WWE Championship at Backlash in September! Now, as AJ’s first year in WWE comes to a close, will the self-proclaimed “Face That Runs The Place” be able to ring in the new year as the WWE Champion? To do so, AJ Styles will have to defend the WWE Championship in a Triple Threat Match against both Dolph Ziggler and Baron Corbin. Styles has made a habit out of using any means necessary to remain the WWE Champion, but can “The Phenomenal One” hang onto the gold given the unpredictable nature of the Triple Threat Match?

The last SmackDown LIVE of 2016 would also be home to a major return as, for the first time since No Mercy in October, fifteen-time former World Champion John Cena would step foot in a WWE ring to address the fans. What will John Cena have to say and what will be Cena’s focus heading into 2017? The SmackDown Tag Team Titles would also be on the line on SmackDown LIVE as The Wyatt Family would defend the tag titles in a Four Corners Elimination Tag Match against American Alpha, The Usos, and Heath Slater & Rhyno! Plus, in a rematch from a couple of weeks ago, the SmackDown Women’s Championship would be defended when Alexa Bliss puts the title on the line against former champion Becky Lynch.