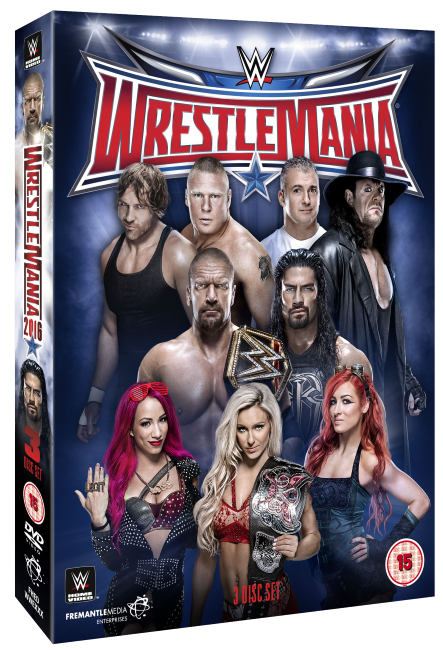 Everything is BIGGER in Texas and WrestleMania is no different as a crowd of *ahem* 101,763 packed into the AT&T Stadium in Dallas. Regardless of the alleged inflation of those figures (the actual number is mooted to be closer to 98,000… which is still phenomenal), a stadium that size filled to capacity is always going to be an epic visual to take in.

Before getting to the main show, the pre-show matches are included as extras on the first disc and were pretty damn good for what they were and the position they were in, although Ryback v Kalisto at the following month’s Payback event was a better match overall (in fact, Payback’s pre-show matches have a good shout for being the best pre-show outings of the modern era).

‘Mania proper begins with the traditional rendition of America the Beautiful as Fifth Harmony regaled the crowd with the US national anthem. This is followed by another traditional element; the opening match cluster-funk to get the fans off to a high-octane start.

Those of us who were disappointed this wasn’t Zayn v Owens in a singles match (which, realistically needs time to be built for a main-roster audience) should have been more than happy that they got a couple of moments between them and their last exchange (Hard-Way suplex onto a ladder) was brutal. Zack Ryder winning was a nice surprise and the fans “WOO-WOO-WOO-ING” along with him can never be taken away from LIIZ.

Jericho v Styles was a great match and the Canadian has really turned it up a notch with his revamped “Best in the World” character and this was, in a way, a modern version of Jericho v HBK at WMXIX.

League of Nations v The New Day will be remembered for the epic entrance of Big E, Xavier and Kofi, then the after-match shenanigans, rather than anything that actually happened between the ropes, Lesnar v Ambrose was easily the biggest disappointment of the night (not that it was the worst match, but it fell ridiculously short of expectations), the Women’s Championship match was great and the Battle Royal was a Battle Royal, so hit all the usual spots (although I was genuinely out of my seat and shouting “YES” – with added expletives – when Corbin won).

Shane v Undertaker was one of the more anticipated matches on the show, especially after an awesome reintroduction of the prodigal son. However, the angle descended into a convaluted mess as the weeks progressed and everyone knew that it would really fall down to McMahon jumping from A REALLY HIGH PLACE. Of course, that’s what happened and while the match wasn’t technically all that good, it was an amazing spectacle and that’s what WrestleMania is meant to be.

The Rock showed up because of course The Rock showed up (although AC/DC have been dubbed over)… only this time he showed up with a flamethrower and set his own name on FIRE because Rock + Fire = AWESOME. Upping the potential epicness of this appearance was The Wyatts interrupting.

It’s become almost a parody now, but there is always the hope that the writers get their act together, realise what Bray and family could be, then actually book them properly. This was another one of those moments; beat down Rock (leading to possible short-term stories to get the group some headway) and have their ‘Mania appearance be memorable. Instead, Rock pins Rowan in six-seconds because reasons and then, with the help of not-fully-healed Cena, totally emasculates The Wyatts in front of the largest audience possible. Because reasons.

Stephanie’s epic (dare I say Lucha Underground-esque) pre-match spiel was great, but the match suffered from being fought between two guys who the general audience don’t want in that spot. Rumours of the mics being muted so the audience at home couldn’t hear 100,000 people booing their new champion aside, this match was plodding and could have done with cutting 7-8mins.

Roman is a main-event level guy and the main problem for him is that he was not Daniel Bryan in January 2015, but WWE are not stupid (just go with it), so they must have known Reigns would be destroyed by the fans in attendance. I mean, WrestleMania is going to be filled with smarks and the smart choice would have been to put Shane v Undertaker on last.

Sure, there would have been complaints about a non-wrestler closing the show, but the final image would have been a victorious Undertaker (always a bonus), the memory of an epic high-spot and the supposed culmination of a major storyline.

As it stands now, the abiding image of the closing of ‘Mania is a Samoan ex-SWAT guy being booed by the population of a large town simply.

The Hall of Fame ceremony was good fun. APA and Godfather was a hoot, Jackie seems stilted, but deserved to be there, Stan Hansen had gravitas, Slick was Slick and The Freebirds were just amazing (Hayes’ tale of him and Gordy being shot at made me laugh like a drain).

Of course, Sting headlined and deservedly so. Announcing his retirement cast a cloud, but the man genuinely is humbled that people think so highly of him and while he may no longer compete in the ring, hopefull there’s a career somewhere for him in WWE.

As previously mentioned, you also get the three pre-show bouts too.

WrestleMania was far too long an event, especially after a 2hr pre-show featuring a trifecta of matches itself. Luckily, with the DVD release, you can watch as much or as little at a time as you wish, so the running time isn’t as much of a factor.

Positives were Corbin winning the Battle Royal, Zack shocking the world and celebrating with his dad (which will mean even more to regular viewers of Long Island Story), WWE finally binning Diva from their vocabulary and reintroducing a Women’s Championship and New Day upping the entrance stakes by coming out of a huge box of Booty-Os cereal.

Unfortunately, the negatives vastly outweigh the positives. This is even more apparent looking at this in hindsight from the vantage of point of having sat through the aftermath on RAW over the last few weeks.

First off, Lita stating the winner of Charlotte, Sasha and Becky would be the first ever WWE Women’s Champion when she herself had held the WWF Women’s Championship belt was a ridiculous piece of rewriting history. Of course, you can argue that technically it’s WWE versus WWF, but that’s just semantics. If they push that their main title and the WWE Intercontinental Championship have a lineage going back to the first titleholders, then consistency needs to be adhered to.

Another glaring issue going in was why Shane even had to take the fight against Undertaker. I know that you need to suspend disbelief when watching wrestling and the in-universe logic needs to take precedence, but this was really stretching it.

Shane McMahon comes in and tells his father that he wants to take over, then essentially blackmails Vince by saying he will reveal a DARK SECRET to the world. In respone, Vinnie Mac says that Shane can have RAW, but only if he beats Undertaker at WrestleMania inside Hell in a Cell. That’s not how blackmail works. There is literally no reason for Shane to take the match over just saying to his father no, then going back to the DARK SECRET he has in a lockbox somewhere.

Even worse is the fact that Shane lost the match, so doesn’t get RAW and now no longer has the power of DARK SECRET PATERNAL BLACKMAIL, meaning The Authority remains in charge and nothing changes. Except that Vince, having defeated his son through his proxy AND eliminating the threat of exposure, decides to put his son in charge of RAW anyway. Ostensibly this was for one week and on the pretext that Vince “knows” Shane will fail. When he doesn’t, Shane gets to run RAW for the next four-odd weeks until Payback, where The Chairman puts both Stephanie and Shane in charge going forward. This itself is asinine, especially as the siblings are now seemingly running the show with no bad blood between them at all.

Not as glaring, but just as galling was Zack Ryder’s post-Mania booking. Losing the IC belt to The Miz and the returning Maryse is one thing. I mean, it puts tremendous heat on Miz (who is a great heel, truth be told) and gives Ryder a redemption storyline where the plucky underdog who has been around forever doesn’t want to go back to being forgotten. However, another loss on the following Smackdown and pretty much nothing since made the Ladder Match totally redundant.

The booking was poor overall. Jericho going over Styles was the wrong call, as was League of Nations over New Day, more so as the former were disbanded only a couple of weeks later. Xavier being dropped by Austin was also stupid, but at least Woods verbally redeemed himself the next night on RAW.

Worst disappointment of the show, however, easily goes to whoever put together Dean Ambrose v Brock Lesnar. First off, not following the “This is who Cactus Jack is” template for the run-in to Royal Rumble 2000 was an odd omission (even in the PG era). Showing footage of Ambrose’s deathmatch past could have added an amazingly potent layer of intrigue going into the bout with Brock and showed he was willing to go to uncharted levels of violence to win the match.

Secondly, the passing-of-the-torch moments with Mick Foley and Terry Funk were genuinely great, but they effectively played no part in the match itself, which was more or less the standard modern Brock Lesnar bout. Full credit to the fans chanting “TEN” in homage to Tye Dillinger when Lesnar reached double-digits for his suplexes. You know you’re doing something right when you enter the public subconscious.

Speaking of subconscious (and another epically plotted seque), those same fans chanted Sami Zayn, Nakamura, Daniel Bryan and others during the course of the main-event. Booking that match as a straight-up heel v face was also the wrong call.

Ultimately, WrestleMania suffered from coming after a truly magical NXT supershow that featured the debut of Shinsuke Nakamura (a lesson in charisma and connecting without really saying a word) and a bonafide 5-Star classic against Sami Zayn, plus American Alpha’s epic ascension (no pun intended) to the top of the tag-team division.

While not a disaster by any means, WrestleMania 32 was a disappointment based on what it could have been and for the fact it essentially meant nothing going forward.

NXT in Dallas was better before and, for me, Payback the month after also surpassed the event.

To that end, while it is WrestleMania and that alone buys some credibility, WWE have pretty much made the event meaningless in the grand scheme of things, so why should we treat it any differently.