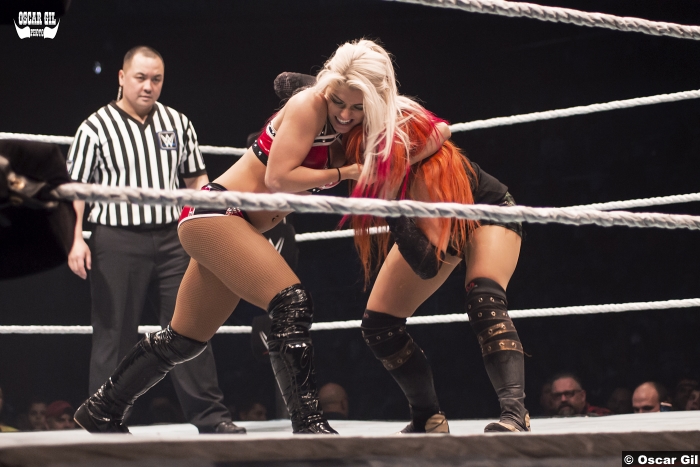 The last SmackDown LIVE of 2016 kicks off with the return of the fifteen-time former World Champion John Cena. After soaking in the mixed reaction from the lively Chicago crowd, Cena promotes the three championship matches set for SmackDown LIVE, asking if Dolph Ziggler, Baron Corbin, or AJ Styles will end 2016 as the WWE Champion with the crowd clearly in favor of AJ Styles. Cena then says that, with a star-studded night of title matches, what is he doing on SmackDown LIVE? This sparks an “Undertaker” chant from the crowd before saying that some people are saying that he’s got one foot out of the door and he’s on his way to Hollywood. Cena continues, saying that he’s there to “set the record straight” before declaring that he’s not leaving and he’s sick of this “new era b.s.”, saying that it’s the “my time is now era”. Cena then lays down a challenge, saying that he is watching tonight’s WWE Championship match very closely tonight because he is challenging whoever wins to a one-on-one match for the title at the Royal Rumble! Cena says that he can do that because he’s John Cena and they better “recognize”!

The opening match of the night would be for the SmackDown Tag Team Titles as The Wyatt Family’s Randy Orton & Luke Harper, with Bray Wyatt in their corner, would defend the titles against American Alpha, The Usos, and Heath Slater & Rhyno in a Four Corners Elimination Tag Match where any two Superstars, regardless of which team they are on, can be legal in the match at a time with elimination occurring by either pinfall, submission, disqualification, or count-out. During the match, Heath Slater would go to the top rope, but Slater would slip off of the top rope and Jimmy Uso would take advantage, scoring with a super kick, pinning Heath to eliminate Heath Slater & Rhyno from the match. Later on in the match, Chad Gable would roll Jey Uso up, keeping Jey down for the three-count to eliminate The Usos from the match, leaving it down to American Alpha and The Wyatt Family’s Randy Orton & Luke Harper, who had avoided entering the match up until that point.

However, the disgruntled Usos would assault American Alpha following their elimination, leaving the team at the mercy of The Wyatt Family. Despite this, American Alpha would manage to rebound, battling back against Randy Orton & Luke Harper. During the match, Chad Gable was able to take Luke Harper out on the outside before Jason Jordan takes out Bray Wyatt, but Jordan gets caught on the apron by Randy Orton, who spikes Jordan with his patented DDT. Orton then spots Chad Gable on the top rope, battling Gable on the top rope and this is when Orton would appear to get knocked off of the top rope, inadvertently knocking Luke Harper off of the apron! Gable then hits a missile dropkick before American Alpha connects with Grand Amplitude as Chad Gable pins Randy Orton as American Alpha becomes the brand new SmackDown Tag Team Champions! As American Alpha celebrate winning the tag titles, Randy Orton and Luke Harper confront each other in the ring before Bray Wyatt enters the ring, quickly trying to diffuse the dissention in The Wyatt Family.

The SmackDown Women’s Championship would then be on the line as Alexa Bliss would defend the SmackDown Women’s Title against former champion Becky Lynch in a rematch from a few weeks ago. During the match, Becky Lynch was in full control of the match when the masked competitor that Becky Lynch disguised herself as last week, La Luchadora, makes her way down to ringside. La Luchadora would get in the ring apron, distracting Becky long enough for Alexa Bliss to roll the challenger up, but Becky is able to kick out.

La Luchadora then exposes the steel spring of the middle turnbuckle as the action continues in the ring with Becky locking in the Dis-Arm-Her on the champion. However, Alexa is able to get her foot on the bottom rope to force the break and this is when the champion would feign having a broken arm. This would distract the referee long enough for La Luchadora to get involved as the masked competitor sends Becky face-first into the exposed piece of the turnbuckle. Alexa then takes advantage, hitting the DDT on Becky Lynch, pinning Becky to successfully retain the SmackDown Women’s Title thanks to a major assist from La Luchadora.

Backstage, after getting slapped by Renee Young for prying into her personal life as well as attacking Dean Ambrose after his match, The Miz was interviewed by Renee Young. After shooing his security away, The Miz would begin to talk about his plans for 2017 when a familiar-looking security guard shows up behind The Miz and that guard would be Dean Ambrose. “The Lunatic Fringe” would then attack the Intercontinental Champion, beating The Miz down before The Miz’s security comes to the rescue, letting The Miz escape as the security guards get laid out.

Then it was time for the main event of SmackDown LIVE as the WWE Championship would be on the line as AJ Styles would defend the WWE Title against “The Show Off” Dolph Ziggler and “The Lone Wolf” Baron Corbin in a Triple Threat Match where the first Superstar to score a pinfall or submission will leave Chicago as the WWE Champion. Early on in the match, it would become clear that Baron Corbin was not going to let the biggest opportunity of his career slip through his fingers as “The Lone Wolf” would dominate both AJ Styles and Dolph Ziggler in the early going.

AJ Styles and Dolph Ziggler would then come to the realization that they needed to work together to take out the biggest threat in the match, trying their best to take “The Lone Wolf” down together. Baron Corbin would take both Styles and Ziggler down before exposing the SmackDown announce table but AJ would catch Corbin with the Phenomenal Forearm with Dolph following it up with the super kick. This leaves Corbin lying prone on the announce table as both Styles and Ziggler climbs on the barricade with both men leaping off of the barricade onto Baron Corbin, putting “The Lone Wolf” through the announce table!

Convinced that Baron Corbin was no longer a factor, AJ Styles and Dolph Ziggler would square off in the ring. The champion would go for the Phenomenal Forearm, but Dolph would counter before hitting Styles with the super kick, but AJ was able to kick out at the last possible second! Baron Corbin is then able to make his way back into the ring as Corbin is able to hit Dolph with the Deep Six, but Ziggler kicks out. Then, in a unique combination of moves, Baron Corbin would go for the End of Days on AJ Styles, but at the same time, Dolph Ziggler would hit Corbin with the Zig Zag! Somehow, Baron Corbin is able to kick out, keeping the stellar championship match alive.

Corbin then sends Dolph shoulder-first into the ring post before putting “The Show Off” on the top rope with Ziggler able to battle back only for Baron Corbin to knock Dolph down, following it up with the End of Days. AJ Styles then spots his opening, connecting with the Phenomenal Forearm to Baron Corbin before pinning Ziggler to successfully retain the WWE Championship in a great Triple Threat Match! After the match, John Cena would make his way to the ring as Cena would come face-to-face with AJ Styles, extending his hand to the WWE Champion. AJ would respond by symbolically laying the WWE Title belt down in the ring between the two of them before accepting the handshake as both men are clearly ready to go one-on-one one more time at the Royal Rumble with the WWE Championship on the line.

What did you think of the final SmackDown LIVE of 2016? Post your comments in the box below.