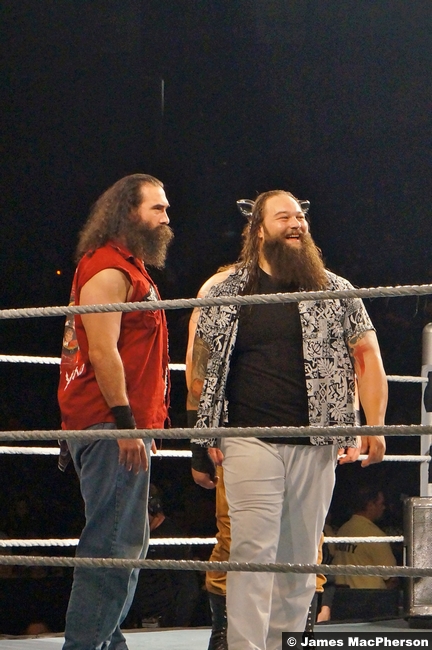 The 12th edition of WWE No Mercy was a SmackDown-exclusive pay-per-view and it came to you, live on the WWE Network, from the Golden 1 Center in Sacramento, CA. After using a low blow to aid him in beating Dean Ambrose for the WWE World Championship at Backlash last month, it would not take long for the era of “The Phenomenal One” to be challenged by a familiar adversary. Appearing on SmackDown LIVE for the first time since losing to AJ Styles at SummerSlam, John Cena would confront new WWE World Champion AJ Styles, making it clear that Cena is ready to make history by tying Ric Flair’s record as a sixteen-time World Champion, saying that he can’t think of a better person to make history off of than AJ Styles. However, standing in the way of Cena’s quest for immortality was former champion Dean Ambrose and this led to a confrontation between Cena and Ambrose that quickly became personal as Ambrose would call Cena a “lazy part-timer” and accusing Cena of “playing John Cena” while Dean is real. All of these bold claims and title aspirations will come to a head at No Mercy as AJ Styles makes his first pay-per-view WWE World Title defense in a Triple Threat Match against fifteen-time former World Champion John Cena and “The Lunatic Fringe” Dean Ambrose! In this lawless matchup where the first Superstar to score a pinfall or submission will walk out as the champion, can AJ Styles prove his worth as the WWE World Champion by leaving No Mercy with the gold or will John Cena do the unthinkable and tie Ric Flair’s record sixteen World Title reigns by becoming the new champion or will Dean Ambrose reclaim the title that was taken from him at Backlash?

No Mercy could also spell the end of an eleven-year career as, after two World Heavyweight Title reigns, four Intercontinental Title reigns, one United States Title reign, a run as “Mr. Money-in-the-Bank”, and countless matches and moments, Dolph Ziggler’s WWE career could very well come to an end. Pushed by The Miz, as well as his own shortcomings as of late, Dolph would do the unthinkable to get one more shot at the Intercontinental Championship by putting his career on the line! Now, at No Mercy, the stage is set for what could be Dolph’s last appearance in a WWE ring as The Miz will defend the Intercontinental Championship against Dolph Ziggler one more time and, if Dolph loses, then he will be forced to retire from WWE. Can Dolph Ziggler win his fifth Intercontinental Title by finally defeating The Miz to ensure his career continues or will The Miz rid himself of Dolph for good by driving “The Show Off” out of WWE?

At Backlash last month, Randy Orton was scheduled to go one-on-one with Bray Wyatt, but, thanks to Bray, that match would not take place as “The Eater of Worlds” would assault Orton backstage, keeping Orton from competing on that night. Since that night, Randy Orton was begun to wage his own mind games against Bray Wyatt, attempting to get inside the head of Bray, but after Wyatt somehow escaped a locked storage locker with the help of the unseen Sister Abigail on SmackDown LIVE, Orton’s attempts to outplay Bray have seemingly failed. However, the unusual rivalry between these two unpredictable Superstars will come to a head at No Mercy as “The Viper” Randy Orton will go one-on-one with “The Eater of Worlds” Bray Wyatt.

Also at No Mercy, after The Usos used the previously injured knee of Chad Gable to defeat American Alpha to become the #1 Contenders, The Usos would bring their new attitude to No Mercy where the twins would challenge Heath Slater & Rhyno for the SmackDown Tag Team Titles. Plus, in the culmination of a longstanding rivalry in the SmackDown Women’s Division, Nikki Bella would go one-on-one with “The Princess of Staten Island” Carmella.