The Expanded Universe Strikes Back! 10 Star Wars Stories Disney would rather you forgot

As Rogue One touches down in movie theatres and launches the Star Wars Cinematic Universe, it is hard not to become nostalgic. Though younger viewers may be thrilled by the prospect of a new slice of the galaxy far, far away every year, for long-time fans this excitement is tainted by the knowledge that there are many other ‘Star Wars Stories’ already out there. Some of these stories, it seems, are ones Disney would rather you forgot.

The late 1980s were quiet on the Star Wars front. That all changed in the 1990s. Starting with Timothy Zahn’s excellent Heir to the Empire in 1991, Star Wars titles began to appear in mainstream bookshops. Some even made it onto the New York Times best seller list. Similar revolutions occurred in the worlds of computer gaming and comic books. Though the Thrawn Trilogy was not the start of the Expanded Universe (now known as Star Wars Legends), it certainly popularised it. Now, with Rogue One, a new expanded universe has been placed centre-stage.

In 2014 the old Expanded Universe was officially decanonized. It is easy to see why. By the time Disney bought Lucasfilm, the EU had become sprawling. This glut of often poor quality material would have seriously limited filmmakers from telling engaging, accessible stories. However, there were many diamonds amongst the rough that modern fans should track down. Let’s look at some of the merchandise that, for better or worse defined the EU. 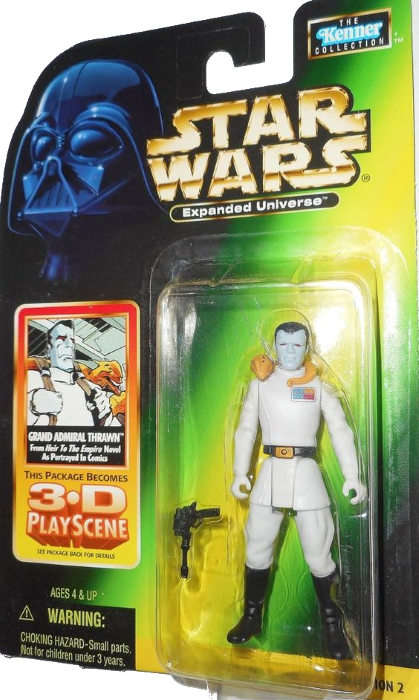 If there is one EU character who stands shoulders above all others, it is the blue skinned Imperial fleet commander. The principle antagonist in the aforementioned Heir to the Empire, Thrawn is arguably the greatest villain in Star Wars history. Lacking any fighting prowess, he is more Tarkin than Vader, relying on his intelligence and encyclopedic knowledge of art to repeatedly defeat New Republic.

When the EU lost its official status many long-term fans were morose. How, they wondered, could a character as towering as Thrawn no longer have a place in the Star Wars universe? Fortunately, the powers that be realised they were in danger of throwing the baby out with the bathwater and Thrawn returned in season 3 of Rebels . Could this be the pattern in future for the best bits of the EU? Many fans certainly hope so.

Though this Kenner figure may not the best sculpt, it captures Thrawn in his original sinister form. He comes complete with a pet ysalamiri, a force-blocking creature which is not likely to make a comeback.

This military genius can be picked up on eBay, boxed, for as little as £20. 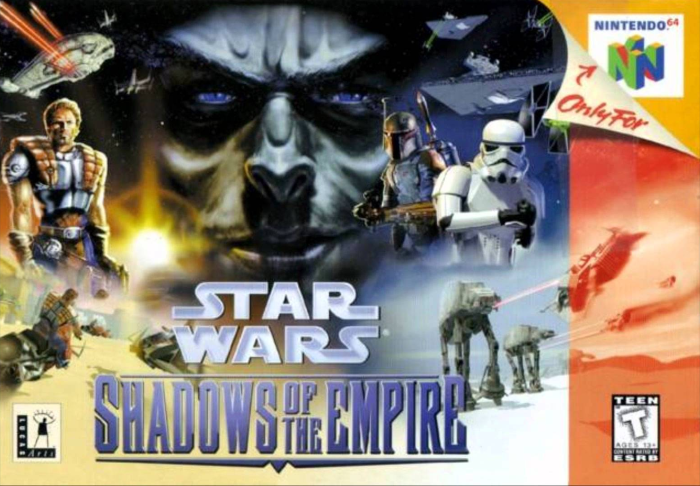 Based on a decent EU novel, Shadows was a smash hit on the N64. Set during The Empire Strikes Back, the game exemplifies one of the most interesting parts of the EU: its ability to tell familiar stories from a different perspectives.

Rather than taking the role of Luke or Han, players fight the Empire as Dash Rendar, a smuggler caught up in the events on Hoth. In one of the most memorable levels in Star Wars gaming, players to bring down AT-ATs as they refight the classic battle in the ice. A following level see Dash returning to Echo Base only to miss a trip out on the Millenium Falcon.

Shadows is not just a reference-laden homage, it is also a cracking game. Should you wish to check it out, it is available on Gog for the bargain price of £4.79. 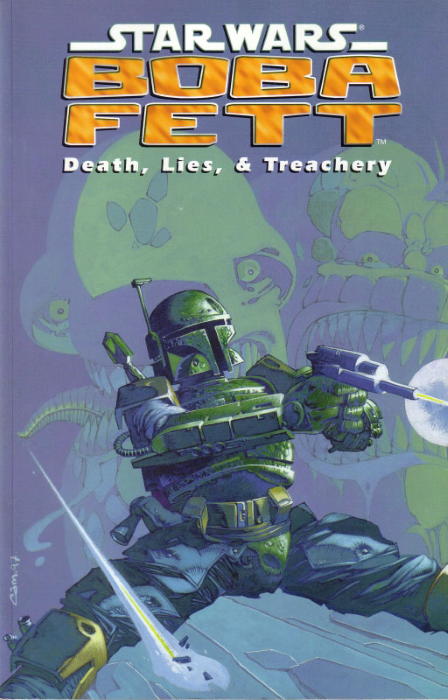 For hardcore fans, there are few more iconic characters than Boba Fett. If you are are still reeling from his quick death in Jedi, fear not: the EU resurrected Boba, who escaped the Sarlacc by blasting through its internal organs.

The infamous bounty hunter has had many adventures since. The best among them are the John Wagner penned comics. Here Fett closely resembles Clint Eastwood’s Man With No Name.If the rumours of a Boba Fett spin-off are true, Disney could do a lot worse than looking to this comic for inspiration.

Death, Lies and Treachery is out of print but can be purchased on Amazon Marketplace for around £20. 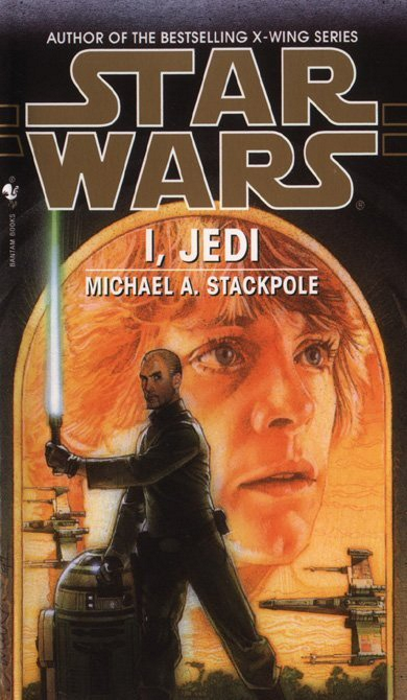 Michael Stackpole was one of the most prolific writers of EU comics and novels. His Rogue Squadron series were superb adventures that included many of the major storyline developments post-Endor. One of Stackpole’s main players, Corran Horn, is another character whose re-canonization would be very welcome.

I, Jedi, a first-person narration of Horn’s time as a padawan, was daring different to the usual EU fiction fare. Most interesting, however, was Horn’s attitude to his Master, Luke Skywalker. Though most definitely a ‘light Jedi’, Horn is often critical of Luke’s holier than thou philosophising and eventually leaves the academy. Horn acts as the mouthpiece of every fanboy’s criticism of Lucas’ hero. In later novels he would go on to become a Jedi Master in his own right, but one more human and interesting than the priestly figures seen in the movies.

The I, Jedi audiobook is currently a free download on Audible. 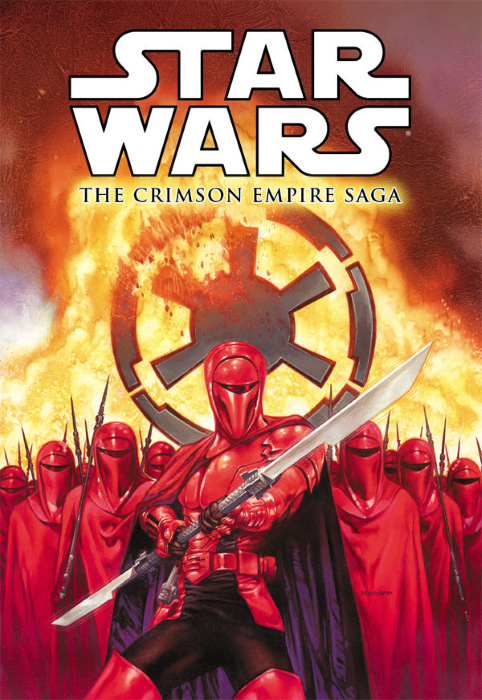 The Royal Guard were one of the most intriguing things in Jedi. In their fleeting appearances they exuded menace and left the audience wanting to know more about them. Unlike any film before or since, Lucas’ original trilogy was full of these tiny, interesting details. Without these, the EU would never have flourished the way it did.

26 years on, the Imperial Guard finally got the story they deserved. Beautifully illustrated, these comics mark a high point for artistry in the Star Wars comics.

The entire Crimson Empire series can be purchased on Comixology for £10.49. 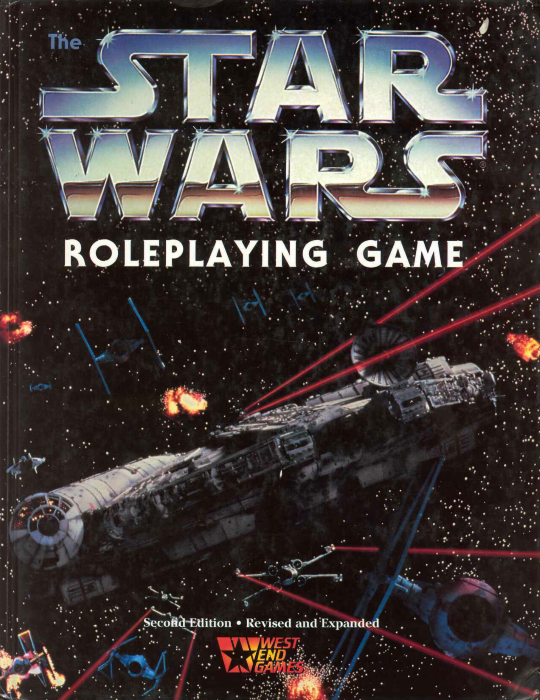 The real engine of the EU was not Timothy Zahn but the now defunct games company that held the Star Wars roleplay licence in the 1990s. As THIS official article recognises, West End Games created much of the background material which is still defines the Star Wars galaxy.

WEG’s gaming system is deceptively simple. Each character has a list of skills (such as dexterity and perception) with a number of D6 assigned to it. The more D6 you have, the more likely you are to achieve complex tasks. WEG’s massive back catalogue has rules for nearly every character to appear in the movies, allowing you can compare your character’s blaster skill to Han Solo’s, or if you choose, Kabe’s.

WEG produced truckloads of material, much of which is fantastically illustrated. As many writers have noted, this has been particularly influential on the recent Rebels cartoon. But why watch this when you can go back to the original material?

Almost every WEG publication is currently available online for free. 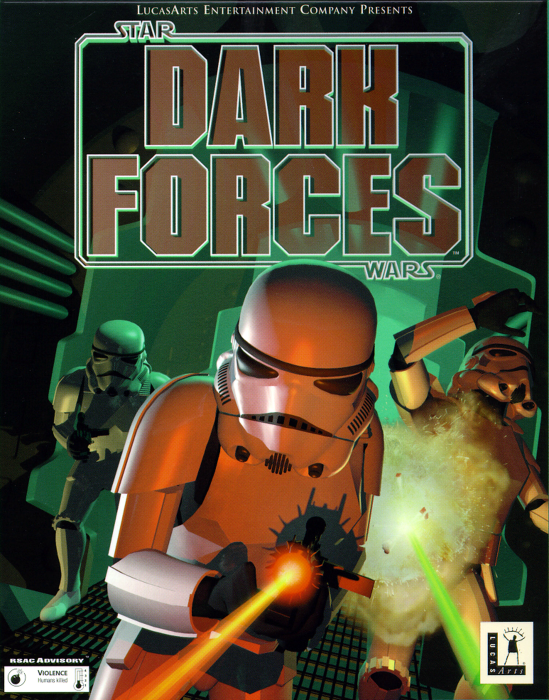 This first-person shooter was often unflatteringly compared to Doom. Though there were similarities, its Jedi Engine was relatively innovative and had several features that were rarely seen at the time such as the ability to crouch and (shocking as it now seems) look up and down.

Dark Forces is worthy of attention as it illustrates the dilemma the EU when plans for new Star Wars movies were announced. Its lead character, the popular Kyle Katarn, spends the first level stealing the plans to the Death Star. Had the EU remained canon, the much-anticipated Rogue One could not have been made. Yet by removing Katarn from the storyline, long-time fans were upset.

As with Shadows, Dark Forces and its subsequent sequels are available on Gog and leave you change from a fiver. 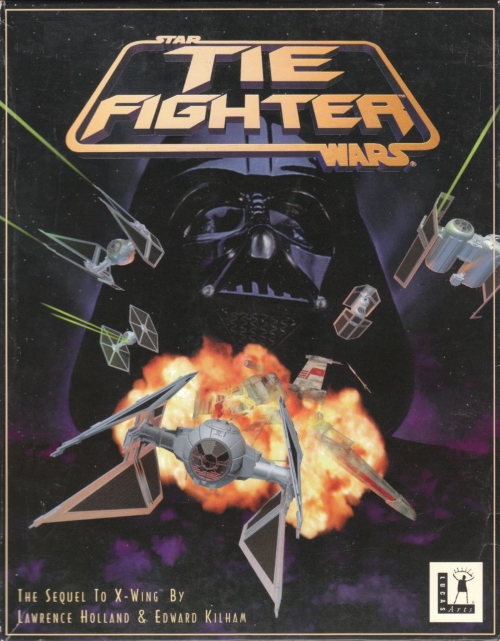 The sequel LucasArts’ X-Wing flight sim, TIE Fighter was truly revolutionary. To many hardcore Star Wars fans, the Empire had always been cool. With its Star Destroyers, Stormtroopers and suave line in naval suits, its kit far surpassed that of the sartorially challenged Rebel Alliance. TIE Fighter was the first game to allow players to be the bad guys or, as its opening crawl stated, a ‘force for law and order in the galaxy’.

TIE Fighter’s inclusion on this list is not just based upon an obsession with military hardware. IGN rated it as the 23rd best video game of all time. If you had one item with which to sell the EU, TIE Fighter would probably be it. 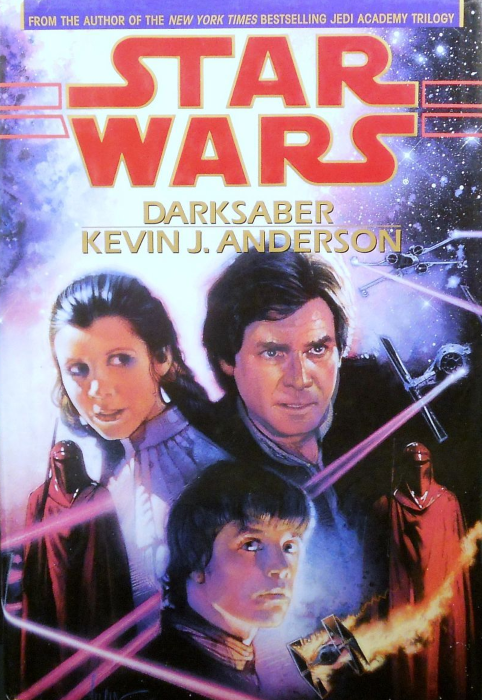 This Kevin J Anderson penned novel should be titled ‘Darksaber: A Warning from History’. Its inclusion on this list is not based on its merits, for it has none. However, it is essential reading for any Star Wars fan with an interest in the past and future of the franchise.

Based around an attempt by the Hutt’s to reconstruct the Death Star’s superlaser, Darksaber is indicative of the lazy, ‘superweapon of the week’ writing that dominated many stories in the EU. When the Starkiller Base was revealed in The Force Awakens, it was difficult not to groan audibly. Star Wars has seen enough WMDs; it is time for the universe to move on. Darksaber should be mandatory reading for all future Star Wars directors, producers and writers. Hopefully by learning from it, they will not be doomed to repeat its mistakes.

Darksaber is out of print but can be purchased on Amazon Marketplace for around £2. 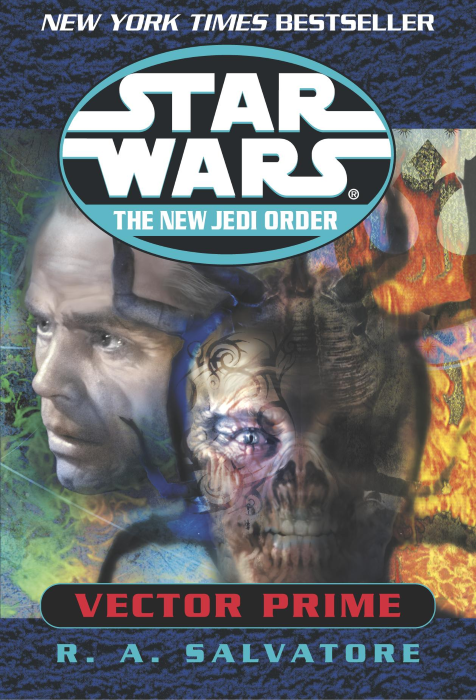 By the time the millennium rolled around the EU’s plots had stretched a quarter of century after the Battle of Yavin. The Empire was defeated and a new enemy was needed to sustain the still popular novel franchise. R A Salvatore’s Vector Prime was the first book in the New Jedi Order; a relaunch that turned the galaxy on its head with the introduction of a new villainous super-race known as the Yuuzhan Vong. It also featured the controversial death of a major character which will not happen in the new canon.

Salvatore’s book in itself is not bad and was a New York Times bestseller. However, it marked the death kneel of the EU. Having sprawled out of control over the previous decade, the EU needed rebooting. Unfortunately, the Yuuzhan Vong invasion, which was so radically different to what came before, was not the fresh start it needed. It did not feel like Star Wars anymore.

The Yuuzhan Vong would eventually be defeated and other Star Wars adventures would follow. Having strayed so far from its origins in Lucas’ trilogy, it was time for the EU to be quietly put to bed. Demand for Star Wars stories, however, was as high as ever.  It was time for a new continuity. Lets hope it can take what was best from the EU and avoid its mistakes.

Vector Prime is available on Kindle for £4.99.