BoJack Horseman Season Three Review: As his show gets better Bojack gets so much worse.

Back in 2015 BoJack Horseman became a very famous TV show. It’s second season was one of the years highlights with its sensitive, and nuanced look at mental health, cutting Hollywoo satire, animal puns, and JD freaking Salinger. From being a show which, in its first few episodes, was seen as a bad bad Family Guy Clone, to comparisons with Mad Men and overwhelming praise, BoJack got one thing overwhelmingly right: it cared about its characters. Can season three live up to this newfound expectation? Let’s see. 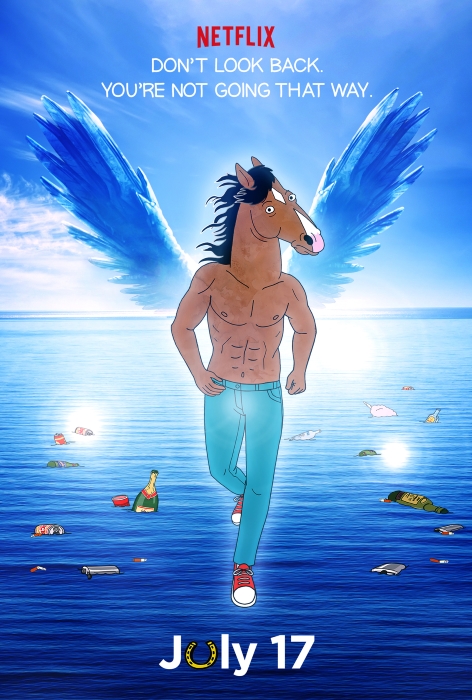 The first thing I noticed as the flawless title sequence hit in episode one was that I was uncontrollably angry. As soon as that sax hit I realised that after this was over I would have to wait another year before I could get more Bojack. All of that from a sax solo preceded by Bojack’s mini meltdown on a press tour. Three minutes in and I was already immersed.

Season three has a lot riding on it, much like Bojack himself. The show and it’s titular horse became critically acclaimed at the same time, the show deservedly so, Bojack not so much. We begin with Bojack promoting Secretariat, his role of a lifetime that was in reality (ha, reality) a CGI Bojack since he missed filming in another attempt at self destruction at the end of the second season. Now Bojack, in order to get an Oscar, the new save-all hope for spiritual happiness, has to play the lie. He has to do the press interviews in New York, a dangerous city for Todd who has his own gritty Big Apple adventure without leaving the hotel. Todd’s debacle in the first episode, consistently getting lost while looking for ice, is a neat summation of Bojack’s problem in season three. Despite his newfound acclaim he still feels empty. The bucket of ice is his piece of mind, and he still can’t find it.

After the slightly hopeful end to season two, season three pulls a masterstroke by showing how difficult it is to break the cycle of depression. Bojack has finally got everything he wanted, his role of a lifetime, his status as a serious actor, and Oscar buzz, yet it still doesn’t fill the hole inside of him. Season two was about Bojack coming to terms with his past mistakes, even making a few new ones along the way, but season three shows that he still has a long way to go. It’s the show’s biggest strength, time and again it tells us that with depression there are no easy answers, that even when things are going well the deeper problem isn’t solved. Bojack’s past, and propensity for self-destruction weigh large in his mind. Even as he commits to his Oscar campaign the spectre of his behaviour with Penny, a girl whose life he worries he’s ruined looms large. 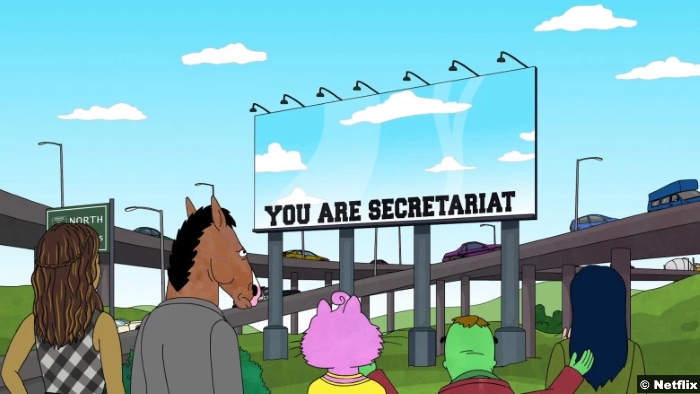 This may feel like the show is going round in circles: Bojack gets depressed, Bojack has a win, Bojack gets depressed again, but season three shows the ripple effect of being Bojack, and being around Bojack. His latest screw ups are met with disdain from his friends: Todd and Princess Caroline especially since they’ve known him so long that they know the routine. Throughout the season his support system disintegrates as his behaviour brings out the worst in Diane, is hurtful to Todd, and almost career ending for Princess Caroline.

It’s not all doom and gloom though. Despite its often grueling subject matter, Bojack is still one of the most gut-bustingly funny shows around. Filled to the brim with animal puns, Academy Award jabs, and all the Mr Peanutbutter you could ask for season three doesn’t scrimp on the comedic front. There’s also an ambition to its storytelling that no other animated comedy can really match, except maybe Rick and Morty. Highlights include a crazy murder mystery, which is constantly interrupted by Officer Meow Meow Fuzzyface (whose renegade style is taken down by office gender politics). There’s also a mostly dialogue free episode set under the Pacific Ocean that boast great physical comedy coupled with the most stunning visuals the show has produced so far, and a labyrinth of narrative upon narrative centred on Bojack’s newspaper subscription, kept on the tracks by Candice Bergen’s inimitable The Closer. 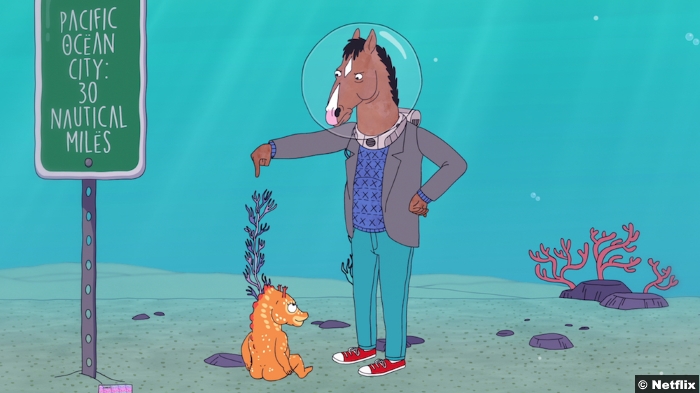 This isn’t just Bojack’s show, the supporting cast is universally strong. Mr Peanutbutter’s anti-Bojack personality is always a breath of fresh air, he’s also the winner of this season’s best ongoing gag, those spaghetti strainers are there for a reason. Todd sets up a safe space taxi service for women, and with typical idiocy opens the company to male clients, Todd also gets the two best scenes of season three, I won’t spoil them here but when they happen you’ll know. Diane gets a fantastic issues episode, easily on par with the Cosby baiting of season two, but other than that is unfortunately a bit sidelined. But Season three really belongs to Princess Caroline. Through her present day business woes, and flashbacks to the beginning of her relationship with Bojack in an unsettlingly period appropriate 2007 (so Todd is to blame for The Sopranos!) we see the toll of knowing Bojack has had on her. This culminates to an episode long conversation between the two former lovers as Princess Caroline, and Bojack get to the bottom of their complex relationship.

9/10 Season three of Bojack, is it’s darkest, funniest, and most ambitious season yet. Nowhere else will you find characters, and stories more complex, and rewarding than the world of Hollywoo, and lucky for us it’s been renewed for a fourth season.