Earlier this year, WWE announced one of the strangest co-promotions in the company’s history. Next year, Scooby-Doo and his faithful gang of friends will be heading to WrestleMania in a new film for the franchise themed around pro-wrestling. The film will feature the traditional Mystery Machine gang working alongside WWE superstars, playing animated versions of themselves, in a joint project between Warner Bros. and WWE Studios. Whilst we wait for more information about exactly what form this partnership will take, we at Cult of Whatever thought we’d help out by pitching WWE’s next possible cartoon tie-ins.

Team Hell No were one of the stranger tag teams we’ve seen in WWE recently. Their clashing personalities, over the top personas and comic bickering would have made them perfect companions for the rest of the Racers.

The Show: Originally ran on CBS between 1968-1969 with only 17 episodes made, it’s still airing to this day on Boomerang. It featured 23 regular characters in 11 different cars racing around North American trying to win the title of ‘World’s Wackiest Racer’.

The Plot: And now, here they are, the most daredevil group of daffy drivers to ever whir their wheels in the wacky races, competing for the title of the world’s wackiest racers. The cars are approaching the starting line. First is the Turbo-Terrific, driven by Peter Perfect, next, Rufus Roughcut and Saw-Tooth in the Buzz Wagon, manoeuvring into position is the Army Surplus Special, and, right behind is a new entry to the races, Team Hell No in the DevilDriver, making their debut here today as part of a recommended team-building exercise. 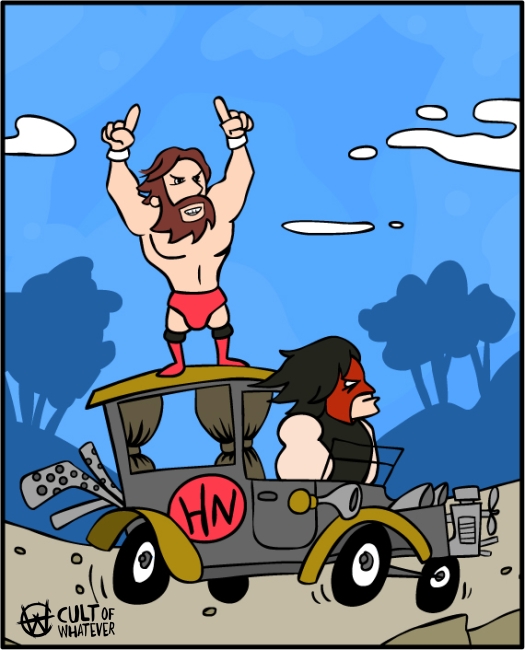 Both Cena and Beavis & Butt-Head share a history of being looked down on for their often childish and inane humour but, whilst B&B has gone on to be recognised as one of pop-culture’s most zeitgeist-capturing shows, John Cena is still regarded as childish and beneath much of the wrestling audience.

The Show: The cult show ran between 1993 – 1997, with a small revival in 2011.  Focusing on two socially awkward, rock-loving teenage delinquents, Beavis and Butt-Head, who live in the town of Highland. They are dim-witted, under-educated, and barely literate, and both lack any empathy or moral scruples, even regarding each other.

The Plot: Beavis and Butt-Head return to reclaim their crown as “Highland’s Most Childish Sense Of Humour” for the tenth year in a row, but their plans are thrown off course when, planning to donate the prize money to the Make A Wish Foundation, John Cena arrives in town and starts stunning the local population with his poor timing, lame jokes and childish scatological references. Forced to raise their game, Butt-Head gets to work writing the most immature speech in recorded human history. 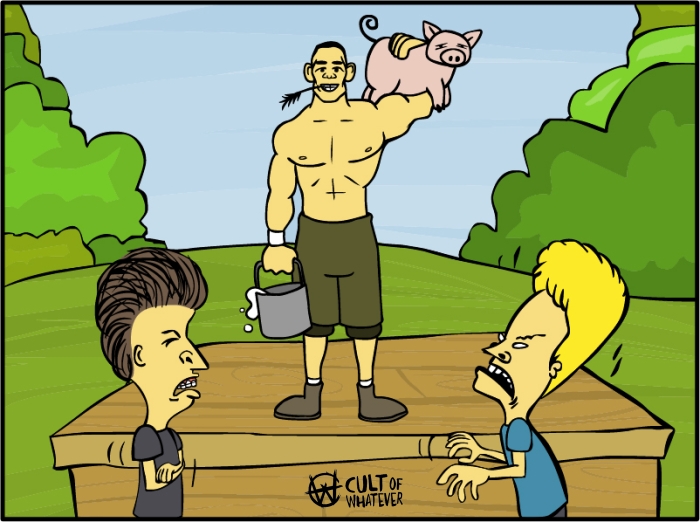 Punk and Park are two versions of the same thing in different media. Both are constantly up to date, obsessively cross-referencing, subtle, often angry and offer an adult-friendly product in a kid-friendly genre.

The Show: Began in 1997 (currently on it’s 16th season) and was an instant hit, consistently earning the highest ratings of any basic cable program. Intended for mature audiences, the show is known for its crude language and dark, surreal humor that lampoons a wide range of topics. The series has won four Primetime Emmy Awards, a Peabody Award, and numerous inclusions in various publications’ lists of greatest television shows.

The Plot: Having spent all year asking for one, Stan finally receives a laptop for Christmas. After a week of looking at a mixture of horrific and pornographic imagery, he becomes so treated and joyless that he can only find a refuge wrestling forums, where meets others, just like him, for which all enjoyment has been destroyed.

Through his new hobby, Stan begins to idolise CM Punk as the only man on Earth more miserable and aloof than he is. Stan’s Punk-influenced charisma and sociopathy make him an instant hit at school, where he begins to develop his own cult of personality, which he spends all his time pretending not to care about.

The only challenge to Stan’s dominance comes when WWE arrives in town, and Punk engages his protege an epic self-aware-off, in which they both become so deeply self-referential, fourth-wall-breaking and inside that it starts to damage the very fabric of time, space and reality, until Stan’s eventual mind-shattering awareness that he’s in a T.V. show proves too much for Punk, who is sucked through an existential wormhole, and forced to live for the rest of time in an alternate dimension where everything is in a constant, indescribable paradox. 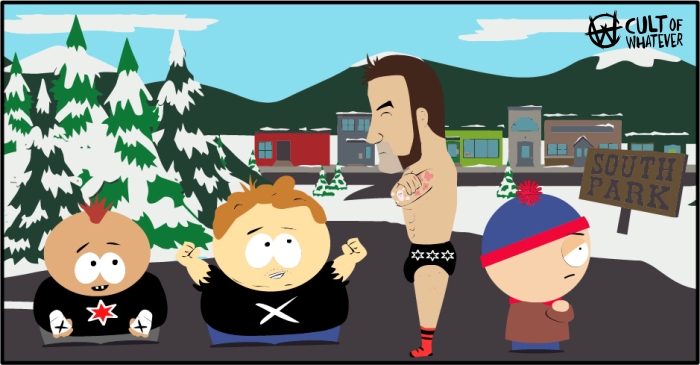 The Real Ghostbusters featuring; The Undertaker

The Deadman has survived as WWE’s longest and most successful high-concept gimmick; a magic zombie from the old West, the perfect enemy for a team of monster-hunters like the Ghostbusters.

The Show: The cartoon was a spin-off from the highly successful Ghostbusters movies. It ran between 1986 to 1991. The show revolved around the continuing adventures of The Ghostbusters (Dr. Peter Venkman, Dr. Egon Spengler, Dr. Ray Stantz, Winston Zeddemore), secretary Janine, accountant Louis, and their mascot Slimer, as they chase and capture rogue spirits around New York and various other areas of the world.

The Plot: Reports reach the firehouse that an evil spirit has risen in Death Valley with the power to cast lightening, return from the dead and consistently have the best match of the year. Fortunately for the people of Texas, the spirit is only powerful enough to rise once a year, so The Ghostbusters assemble their team in Death Valley in early April to await their chance to defeat the beast. 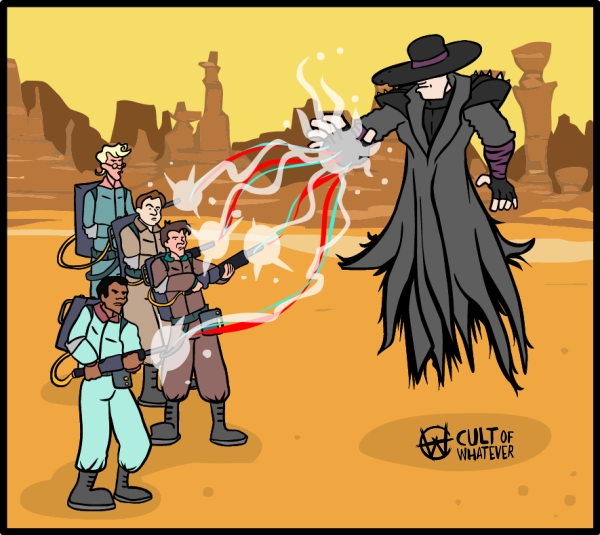 The Shield mark an exciting coming together of modern pro-wrestling reality with a more traditional high-concept gimmick; a gang of villains with a moral code, and a willingness to use extreme violence. With their urban grit, realistic toughness and personal morality, they’re the perfect fit for a dark noir comic world like that of Gotham City.

The Show: Aired originally between 1992-1995. The cartoon was praised for its dark tone with a more adult-oriented approach featuring outright physical violence. It consistently ranks as one of the greatest animated television series ever made.

The Plot: Whilst apprehending a team of bank robbers, the Dark Knight is assaulted by a mysterious group calling themselves simple “The Shield”. As time goes on, he finds them interfering in more and more of his missions as he struggles desperately to figure out their vague, ever-changing motivation for the attacks. 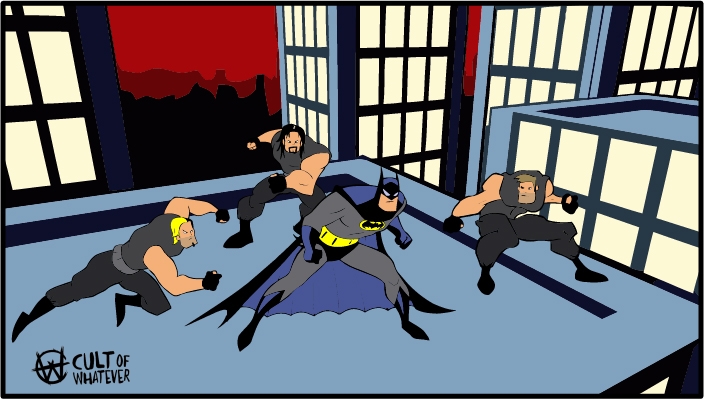 There’s little Ryback and Yogi have in common except to the sentiments expressed in Ryback’s catchphrase, “Feed me more!”, a demand echoed in Yogi’s constant hunt for picnic baskets.

The Show: One of the most iconic cartoon characters around, 33 episodes of  ‘The Yogi Bear Show’ were made and aired between 1961-1962. The show is still repeated to this day! beginning in the ’60s the show still airs today.

The Plot: On one of his daily hunts for picnics, Yogi finds the park strangely empty of food. He soon finds the cause; a genetically altered yeti from the nearby mountains is terrorising the park, demanding to be fed more. Using his brute strength, he has taken control of the park wardens, and now sends them out on missions to gather up an endless supply of pic-a-nic baskets. 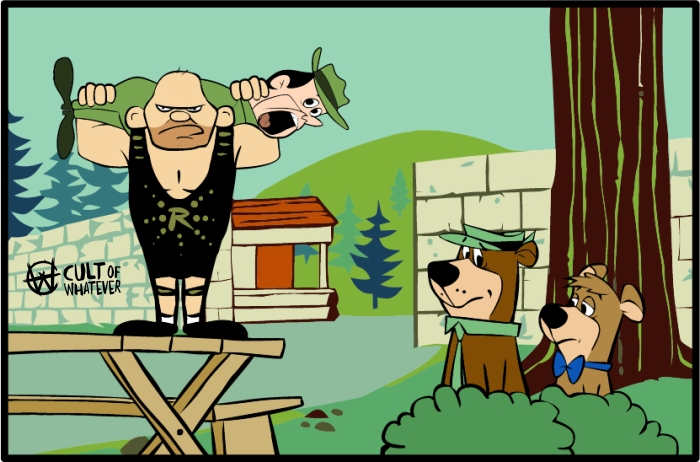 Given his aversion and hatred of Latin-American immigrants, there could be no greater enemy for Zeb Coulter than Speedy Gonzalez, a proud Mexican icon who’s speed and intelligence make him a living nightmare for a paranoid xenophobe like Coulter.

The Show: Debuting in the ’50s, Speedy was one of the original looney tunes, even winning an Academy Award in 1955. He was featured or starred in 46 cartoons which have been repeated numerous times over the years. Unfortunately, the repeats stopped due to the ethnic stereotypes portrayed in the cartoons.

The Plot: During one of his daily runs, Speedy gets lost and accidentally crosses through a gap in the chain-link fence marking the border to Arizona. Luckily for true patriots every, Zeb Coulter is on the lookout. After Swagger’s DUI arrest, Coulter’s had lots of time on his hands, and uses it to patrol the border of his beloved homeland. Coulter begins the hunt for a like-minded wrestler fast enough to catch this illegal varmint and forcibly deport him. 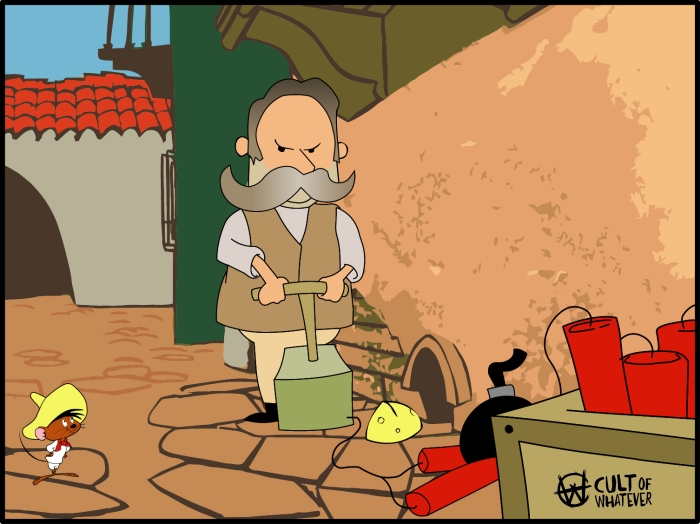 He-Man and the Masters of the Universe featuring; Big E. Langston

Like so many things to come from both out childhoods and the 1980s in general, it can be hard to look back on some of He-Man’s antics and costumes without giggling. At least with Langston, we didn’t need hindsight to snigger childishly at his sausage eating and his ridiculously tiny costume.

The Show: One of the most popular cartoons of the ’80s, it ran between 1983-1985 totalling 130 episodes. Repeats of the show are still shown in the USA on the Retro Television Network, Me-TV and in Canada on Teletoon Retro.

The Plot: With Skeletor finally defeated, He-Man enjoys his status as the undisputed king of homo-erotic manliness. That is, until his kingdom is invaded by Langston and his arsenal of suspicious weaponry. Shocked by his ill fighting costume, large buttocks and a strong appetite for sausage, He-Man is forced to raise the bar ever higher in a life-or-death battle to see who can make homophobes more uncomfortable. 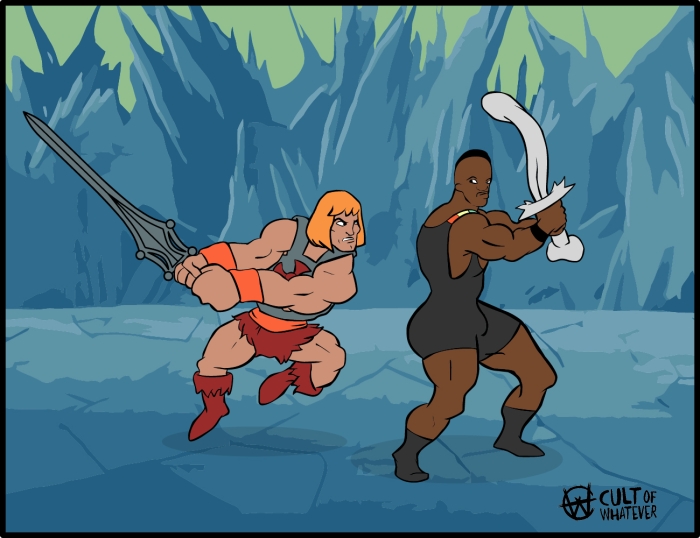 Sandow and Rhodes represented the antithesis of Johnny Bravo and, with him, much of wrestling’s red-blooded fan base. Educated, pretentious, elitist, there are many qualities in the Rhodes Scholars that would actually be considered positives in many of today’s youth cultures, especially in “cool” urban communities on the American coasts, where a few lessons from the former best friends could go a long way from turning a middle American jock into a coastal self-aware hipster.

The Show: Premiered in 1997 on the Cartoon Network the show was hugely popular being renewed for successive seasons, ending in 2004.

The Plot: After moving to Brooklyn, Johnny Bravo is stunned and disappointed to find that the women in his new hometown fetishise education, pretentiousness, snobbery and, most importantly, moustaches. Distraught this his traditional tricks just aren’t doing it for the ladies anymore, Johnny enlists the help of the Rhodes Scholars to educate him in the ways of the new age gentleman. 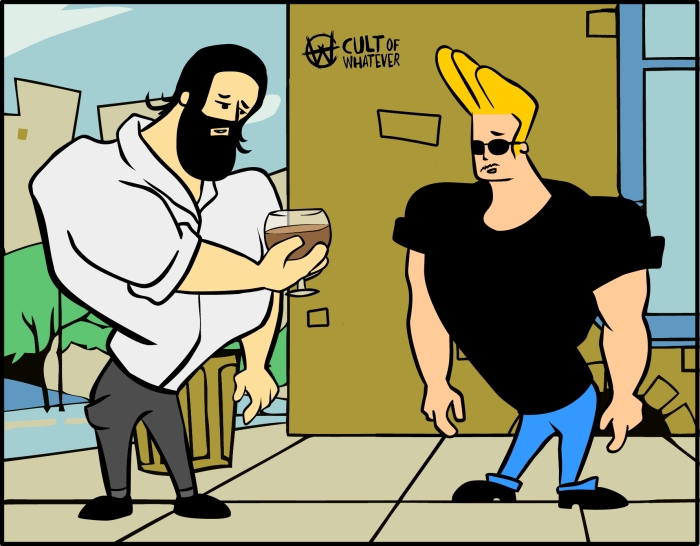 What do you think are some good cartoon-wrestling tie-ins, and, more importantly, what do you think about WWE’s new partnership with Warner Bros.? Let us know in the comments section below.