In so many ways NXT has been a game changer for WWE.

What started out as a little-watched show exclusively on WWE.com has grown into the most universally popular attraction the WWE offers today. It was already starting to become an underground hit before the launch of the WWE Network: Sami Zayn’s quest to earn Cesaro’s respect was the real driving force behind NXT’s small but passionate fans’ desire to get the word out. Before that, the great success of The Shield and especially the Wyatt Family gave the minor-promotion a little bit of buzz. Once the WWE Network launched, it did so with a live event billed as NXT’s first supershow: ArRival. Zayn and Cesaro’s feud was wrapped up, other stars like Tyler Breeze, Adrian Neville, Rusev and Paige were showcased and overall the upstart minor-league brand made a heck of a first impression.

A few months later they did it again with Takeover. And then they did it again with Fatal Four-Way. If you don’t want NXT, you know how suddenly Tyson Kidd found a gimmick and became a really popular wrestler seemingly out of the blue? Yeah, NXT did that. Also at Fatal Four-Way, the legendary KENTA joined the NXT family, adopting the name Hideo Itami. The NXT fans, unlike the more crass variety found on main-roster shows, took to the name and refused to go for the cheap chant. In fact, whenever an NXT audience member tried to start a “Kenta! Kenta!” chant, he was quickly drowned out by boos followed by a “Let’s go Hideo!” chant. NXT fans genuinly love NXT; they don’t hate-watch it the way fans do the main-roster shows.

That was the show that moved NXT up another notch. It had gone from unknown farm promotion running out of a warehouse, to upstart promotion few knew about, to upstart promotion few cared out, to cult hit with a growing audience. After R-Evolution, and thanks to the continued sagging of Raw’s quality, NXT became the offical counter-product for those who want good WWE-produced Sports Entertainment. NXT became an offical third tier of the WWE wrestling machine; on a different wavelength than Raw and Smackdown, but now officially part of the brand.

NXT took its show on the road soon after, with two successful stops in Ohio (the cities of Cleveland and Columbus). After those two shows were big hits, and proved that the passion of the Full Sail University audience was not an isolated unit, the next logical step was to feature the promotion during the WrestleMania week festivities.

So, long after the initial WrestleMania ticket packages had gone on sale and been purchased, WWE announced that NXT would run a house show in the 5,000-seat San Jose State University event center. The basketball arena would be the largest venue ever to host an NXT event (by a factor of five) and to top it off it would not begin until 10pm local time. If other Mania fans are anything like me, they already had their days and nights planned out and booked up. A 10pm-to-Midnight show is not something you can just squeeze in when you’re trying to take in the city and enjoy the other happenings around town. So there were a lot of built in factors that could have made for a tepid response to such a last-minute idea.

Instead, it essentially sold out immediately. 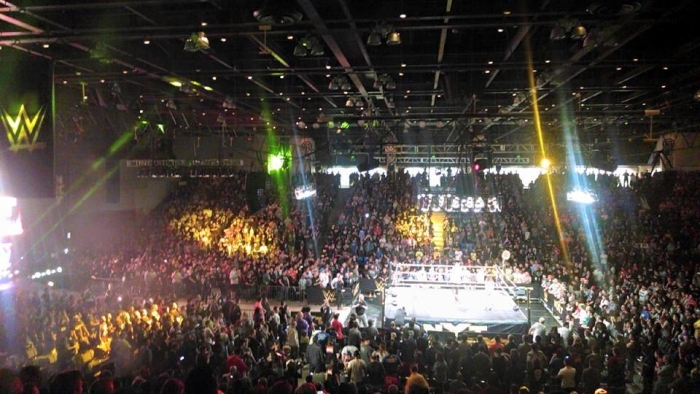 I snagged a couple of tickets literally seconds after they went on sale. Had I waited until AFTER I went to pee, I would probably have missed out

To start with, the crowd. NXT is the best crowd of wrestling fans on the planet today. They love crazy characters the way a WWE crowd is conditioned to, they love pure wrestling like a great Ring of Honor crowd, but will also–like the traditional Japanese crowds–will occasionally sit quietly to enjoy a great chain-wrestling sequence without getting restless or trying to get themselves over with a chant (though to be fair, NXT fans do love to chant). To top it off they have a fierce (to the point of insanity) loyalty to the brand and to preaching its gospel the way the old ECW crowds were.

It’s like someone took the very best of all the best wrestling crowds and cut it down to the top 750 fans and stuck them in a room to watch great wrestling every week.

The WrestleMania crowd showed their love for NXT all week long. Though there were only about a dozen different shirts available, the sheer volume worn by people around San Jose was astronomical. Every third person I saw had on a KO shirt, or a Finn Balor shirt, or a Enzo/Cass “SAWFT!” shirt or a Bayley shirt.

It was more than just rebelling against the boring old main shows. It was more than seeing something new (many of these fans are regular watchers of indie wrestling; there’s little “new” about Kevin “Owens.”). It was a whole combination of getting to be a part of something worth being a part of. I can’t tell you how many times since October of last year (when I bought my Mania tickets) that I regretted the money I had already spent and the additional money I was sure to spend. With every frustrating Raw episode, go-nowhere angle, bad booking decision and stupid push/de-push, I wished I could have gone back in time and bought tickets to last year’s WrestleMania. Through it all, however, I had NXT. I had a wrestling show worth watching. I had a wrestling show worth touting.

Naturally the crowd was fired up for the show.

Huge pops, by order of appearance, went to: Hideo’s GTS, Bayley!, Triple H (who is so hated on Monday nights, but so loved on Wednesday’s…or in this case, Friday night), Enzo and Cass (these guys are going to make so much money with WWE), the Sami Zayn and Kevin Owens promo battle, and everything about the women’s title match and the Balor vs Neville main event.

So basically everything worth popping for was met with great excitement, infectious chanting, and standing ovations. Just what you’d expect from an NXT crowd, no matter the city.

Finding out that Vince McMahon himself was in attendance and taking in an NXT show live for the first time was a very weird thing for the audience. There was this sense of nervousness, as though we didn’t want Vince to really find out too much about what goes on between the yellow ropes, but also there was a real sense of pride in showing him that the fans who often sit on their hands during RAW were more than happy to stay up well past midnight to cheer wildly when faced with dang good sports entertainment.

It later was revealed that the show was scheduled to end at midnight but Vince okay’d it to go an extra hour. I take that as a good sign.

Where does NXT go from here?

When it comes to WrestleMania there can be no question that an NXT show must become a part of the regular festivities. This was obviously a last minute decision, so maybe next year it can be booked at a more convenient hour. Axxess always starts on the Thursday before WrestleMania, maybe they could run a live NXT special on that Wednesday. It would add an extra day to the travel package, but you can be there are 5,000 fans willing to pay for an extra night. If not Wednesdays, then run it on Thursday during the final three hours of Axxess that day. The Hall of Fame ran on Friday night at the same time Axxess was being held, so there is a precedent there to do that.

Either way, NXT has solidified itself as more than just a developmental league. It is a fully-formed brand of WWE’s Sports Entertainment Empire. With the Raw/Smackdown brand-split dead and buried, NXT has become the defacto “other” show to watch. As such, it needs and deserves a bigger presence at WrestleMania weekend going forward.

Assuming it gets it, that’s just one more reason to go next year. 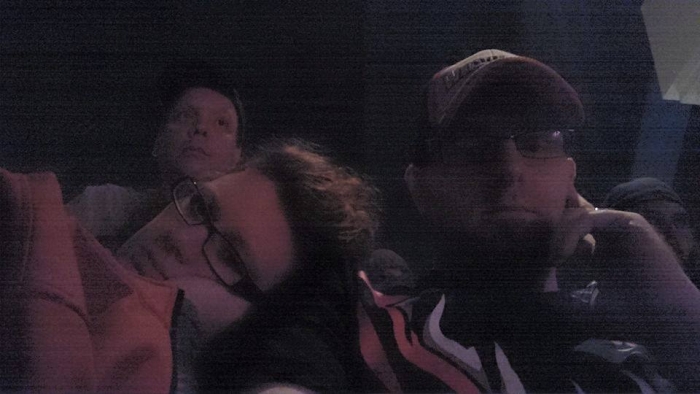 My poor pregnant wife just couldn’t handle all the excitement. By this point (intermission) it was nearing midnight, and our bodies were still on central time, so it felt like 2am to us

See page #3 for my WWE Hall of Fame experience…