By the time Age of Ultron leaves theaters, its early–huge–box office numbers will be minor, though steady. It grossed 13mm on the Monday after release, another 13mm on Tuesday, and 9mm on Wednesday. By the time Ant-Man premiers, Age of Ultron will be making thousands of dollars per day, of which only a few hundred will actually reach the pockets of Marvel Studios. Still, money is money, and by the time the film reaches that point, Ant-Man will have debuted with–let’s estimate–a 110mm opening.

Marvel Studios will be able to ride Ant-Man for a few more months before things cool down over the fall and winter. Not long after, though, things will ramp up again for Civil War next May. The third Captain America movie will have an Avengers-like cast, an Avengers-like opening weekend, and Avengers-like box office legs. Once it leaves theaters, Dr. Strange will be ready to take its place, and then 2017 will bring Guardians of the Galaxy 2, Spider-Man’s MCU debut film (the money it earns will go to Sony, however), and what promises to be a universe-shaking Thor: Ragnarok.

2018 of course brings us the first part of Infinity War, which is expected to approach box office records (though not break them, as its usually the second in a two-parter that gets the bigger payday), and will be a money-maker for the studio until July’s Black Panther hits, and then that film will carry the torch until Captain Marvel in November brings us our first female-led superhero film. 2019 finishes the Infinity War story, wraps up the first real “saga” of the Marvel Cinematic Universe (comprised of a core trilogy of trilogies, plus the Avengers “trilogy” and several individual movies) and puts a bow on the biggest cinematic success story since Amblin made the 80’s and 90’s the summer blockbuster studio.

In short: Marvel is set to make bank from now until the US prepares for its next Presidential election.

Iron Man, Thor, Hulk and Captain America–the core of the Avengers–will either see their actors recast or will see a diminished role in the next MCU saga (spanning, perhaps, another trilogy of “phases”), or both. That’s no big deal to comics fans; characters flit in and out all the time and we keep reading. Casual moviegoers, however, are a different breed. They are paying to see Robert Downey Jr. just as much as they are to see Iron Man. Granted, Guardians of the Galaxy proved that Marvel could release a nothing-property with none of the big names they had built their franchise around and still make a killing. But I suspect GOTG’s success was more of a “lightning in a bottle” sort of thing.

I think moviegoers flocked to Guardians, not because it was a “Marvel movie” but because the trailer was so much fun, and the property itself was so unknown that people went to see it precisely because it wasn’t yet another sequel, remake or reboot like Hollywood loves to churn out. Yes it was part of the Marvel series, but it was so detached from it, both in tone, setting and story, that the movie might as well have been its own franchise. If Guardians’ success was because of it’s Marvel association you would see a 700mm box office for Ant-Man and I can’t find anyone predicting that.

No, the brand of Marvel is strong, but not that strong. It’s strong based on a string of quality movies and some great actors in the lead. Compare the box office revenue of the Thor movies vs. the Iron Man films: Ticket buyers care about more than just the red and white “MARVEL” letters. So what will happen in phase four, when the studio is riding on Dr. Strange 2 and Moon Knight (that’s just silly speculation) to carry their universe? Will the casual moviegoers still be along for the ride?

There’s a funny video that highlights what it must be like for a non-comic fan to watch a Marvel presentation, as the studio hypes the next round of movies based on their properties…

It’s gibberish. I’m sure there’s a little of that going on already. I mean, apart from comics fans and children who watch some of the newer cartoons, who has actually heard of Black Panther? Who do you think the casual movie ticket buyers are picturing when you tell them that Marvel is bringing the hero “Captain Marvel” to the big screen?

Do you think it’s this: 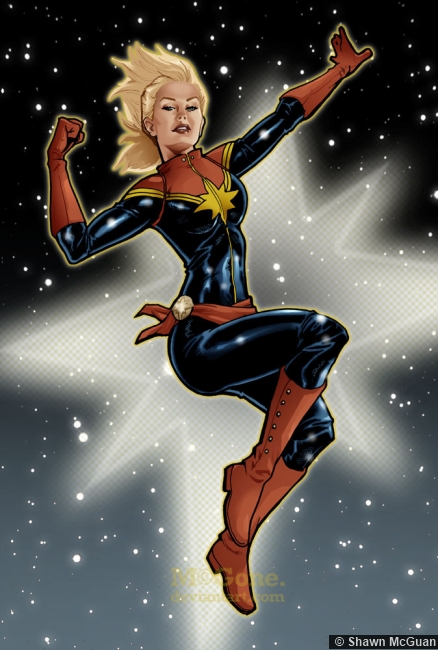 Right now Marvel is riding high. The only real creative misfires they’ve had have been based on properties tied to the current Avengers trilogy (Iron Man 2, Iron Man 3, Incredible Hulk). They’ve only had one movie that is not-yet connected to the greater Marvel Cinematic Universe: Guardians of the Galaxy. Admittedly it was a huge gamble, and it certainly paid off for them, but they can’t hit a home run every time. Ant-Man is coming up next, but even if his solo movie stumbles a bit, you’ll be seeing him again in the sure-to-please Civil War movie. So its box office weakness will be mitigated by a quick integration to the greater universe; he’ll succeed by association.

What if Captain Marvel never catches lightning in a bottle like Guardians did? What if people get a taste of Black Panther in Civil War but the trailer for his solo movie never clicks with them? Even Pixar eventually lost their midas touch, as critics rejected Cars and both critics and ticket buyers rejected Cars 2. But for the most part Pixar makes stand alone films; Marvel Studios is solely in the franchise business. They’ve created a movie “universe” and need every one of their franchises to share the box office load in keeping it afloat.

By the time the MCU’s Phase Three ends, a decade will have passed since Jon Favreau (an indie actor with one hit–Elf–on his resume), teamed up with Robert Downey Jr. (a talented actor with a past so troubled studios struggled to secure insurance on their movies with him in the lead), to make a big screen adaptation to a minor character no one outside of Marvel fanboys cared about, and no one outside of comic book nerds even knew about. The movie was bankrolled by Marvel Studios (an upstart film company whose entire focus was making movies in a niche market, comic book movies) and set to be released a few months before the premiere of The Dark Knight (which promised to be the biggest movie of the summer, with a sure-posthumous academy award winning performance at its heart).

And even though DC did win the battle (Dark Knight’s box office was #1 that year with a half-billion in the domestic box office; Iron Man was #2 with 300mm), it lost the war: 2008 ended up being the last hurrah for DC’s short-lived movie empire, and the opening salvo for Marvel’s long-lived movie dominance.

Iron Man’s success gave Marvel the confidence to go forward with their ambitious plan. Marvel’s three phases will, by the time they have concluded, have given us a trilogy of trilogies devoted to Iron Man, Captain America and Thor, as well as universe-building (and expanding) films based on Hulk, the Guardians of the Galaxy, Ant-Man, Dr. Strange, Black Panther and Captain Marvel. All of these movies have orbited around a trilogy of Avengers films that have broken box office records across the board. By the time the Infinity War 2-parter is over and Thanos is–predictably–defeated, moviegoers will absolutely be spent, exhausted as viewers the way our heroes on screen will be as combatants.

But the story won’t end. Like comics, it never ends: It just regroups, resets and restarts. Will casual moviegoers have the will to keep up?