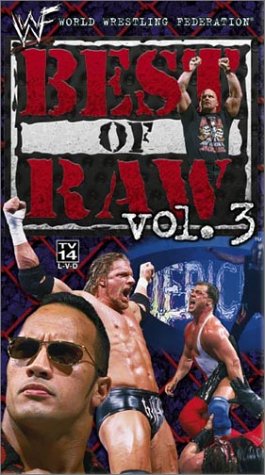 The video starts of with the coverage of the McMahon-Hemsley era and how it was formed. As we progress along the video it goes from extreme to love affair this time it is Mark Henry and Mae Young. The Video ends with a little coverage of the firing of Mick Foley as WWF Commissioner. The video has a lot of matches, promos & interview’s thrown in to make it cover the whole of 2000.

The time from November 1999 too 2000 was an eventful time in the WWF to say the least. So would this video give us the Raw is War fan a full and comprehensive account of the year that was 2000?

The video has some good parts and some not so good, but hey nothings perfect. The biggest influence in the video is the McMahon-Hemsley era. For the most part the video is based on the storylines around the HHH and Stephanie marriage, with some of the coverage focused on the Test and Stephanie relationship. The best part of the coverage about the McMahon-Helmsley era has too be the feud with Mick Foley and certain matches and events around this time, such as the ‘Pink Slip on a Pole match’ the Radicals making there WWF debut and of course who could forget the segments with the fake Mankind and HHH, pure gold.

But as the video progresses into the year 2000, we are still left with HHH and Steph, but this time the ‘Olympic Hero’ Kurt Angle has joined the fray and this is the best and funniest storyline of 2000. The love triangle was excellence at this time in the WWF. We saw Kurt Angle and HHH battling over the love of ‘The Billion Dollar Princess’ Stephanie McMahon Helmsley. The video has some pure classic moments from the storyline, with the HHH and Trish Stratus moments and the secret hugs between Kurt and Steph.

The video also covered the “The Most Dysfunctional Family on TV” with bits and pieces surrounding the Wrestlemania main event. Form the No Way Out matches with HHH and Cactus Jack to the Rock VS Big Show match and Shane ‘O’ Mac’s inference, then the return of Vince, and then the return of Mick Foley, the video certainly covered this pretty well. It then returns to the Wrestlemania and gives us the outcome of the main event. The next night on Raw The Rock is in a Steel cage match and this is on the video and it gives us a nice little account of the Wrestlemania aftermath. Also featured on this installment of the Best of Raw is the match in whom HHH lost the WWF title to Chris Jericho, and the surrounding storyline about that with Earl Hebner.

The final high of the Best of Raw Volume 3, has too be the night after King of the Ring 2000 and the return of Mick Foley, the new WWF Commissioner. Mick Foley has to be the funniest man ever to grace the WWF ring. Whether it is his great promos with Edge and Christian or his funny antics with HHH and Steph it was a welcomed site to see Mick Foley on this dismal video.

Yes, I said Dismal. The Video really had some low points. Not that many low points but when they low they sink straight to the bottom of the barrel. Firstly we see the most pathetic and stupid storyline ever. Yes that’s right, Mark Henry and Mae Young, how low can you get? You see parts from Raw with Mark Henry in bed with Mae Young, you see the two kiss each other and the list goes on. I mean I have a sense of humour, but this is not even funny it is just sick!

In the summer of 2000, the most annoying theme tune was brought into the WWF, the Right to Censor theme tune. But it was not the theme tune, the whole thought of Steven Richards, Ivory and the other RTC members shouting down a mic telling people that RTC was there to help, just made me want to puke. The sad thing is that RTC get more time on this video than Chris Benoit or Kane. I mean what are the WWF trying to do, drive us all insane and for us too leave our nightly spot in front of the TV watching Raw, to staying up-late in the middle of the night to watch a Billy Gunn match on Heat.

It gets from bad too worse as the video covers Chyna and Eddie. Indeed this is terrible with Chyna and Eddie arguing over Chyna’s Playboy pictures and Eddie going to the Playboy Mansion and you all know the story anyway. I can’t see the point of this segment in the video.

It really makes me wonder sometimes, who make up these video compilations. They generally have the best parts in, and the worst parts in. Why would the WWF put RTC, Chyna, Mae Young and Mark Henry in s ‘Best of Raw’ video, when they have not even got full and decent coverage of The Rock and Y2J?

It is a sad day in the world of wrestling when I wish that a wrestling video had more of The Rock on. This Best of Raw video is ok I suppose if you are willing to watch the likes of Mark Henry and Mae Young. But in all honesty it has good parts and worse than bad parts, we see the worst parts with RTC and the other people in, but we see the good parts with Foley, Angle, HHH and Steph. But one thing that I cannot understand is why the lack of Edge and Christian in the video? The video lacks plenty of the major superstars of 2000. My theory to the contrast in the segments of Raw is that one person thought the video was called “The Best Of Raw” and the other person “The Worst of Raw”. So my advice to you is, if you have seen most of Raw is the year 2000, don’t make the mistake I made in buying the video. But if you have not seen much of Raw in 2000, it might be worth buying.