Smackdown, the WWE “B” show, reaches double-digits and the company is going all out to celebrate that fact. As I write this, the special broadcast of the show is getting set to air this Friday, the latest video game to carry the name is due to be in stores in three weeks time and, in my hand, I have this, a three-disc look back at the top 100 moments in the show’s history. 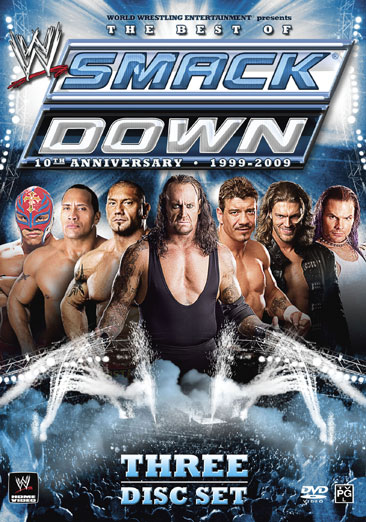 This couldn’t have been an easy collection to put together, after all, Smackdown has over 500 shows under its belt, that’s over 1,000hrs of footage covering the Attitude Era ™, through the Smackdown-Six and on to the present day. With that in mind, there’s obviously going to be something excluded that another person feels merit a mention.

Our hosts for the evening are Michael Cole and Matt Striker and they both excel in their roles. Cole deserves to be here due to the fact that, up until his draft switch to RAW, he had co-hosted every single broadcast bar two. Striker is a great addition due to his knowledge of wrestling history, his eloquence in getting a point across and his spot-on impressions.

Unlike the RAW anniversary release, this doesn’t run in chronological order, but is instead a countdown of the top 100 moments, however I’ve not read anywhere whether it was a fan vote on WWE.COM or if the list was chosen internally, but there are some baffling decisions (such as having the Eddie tribute show lower down on the card than Mick Foley’s run as Commish and Big Show doing an impression of Fat Bastard from Austin Powers). That being said, there are a lot of great inclusions when you run down the list.

At first, not running in chronological order seems like a mistake, but once you start watching it, you realise that it is a great decision. If it had run in that order, you most likely wouldn’t watch to the end due to the content being so recent, but with the clips jumping back and forth through time, you stick with it very easily. Some segments do run too short, while other, more banal segments, get a little too much attention.

The choice of talking heads seems odd, as there is no contribution from any of the really big names. Santino (who is hilarious every time he appears), Mark Henry, Jerry Lawler, Striker, Lillian, Shane (the only “headliner” to appear), Tommy Dreamer and Kofi Kingston all chip in from time to time, but to not have guys like Jim Ross, Vince, Triple H, etc add their two-cents is a little strange.

Not all of the matches are in their entirety, including the Iron Man Match between Kurt Angle and Brock Lesnar (a lot of complaints have been posted online about this match being shows as highlights, but at over an hour long with entrances, it would take up more than 10% of the running time). A lot are shown in full though, including  some stunners like Austin v Van Dam during the Alliance Invasion days, Rey v Eddie inside a cage, WWF Champion Triple H v ECW Champion Tazz, Batista/Rey/Finlay/Jeff Hardy v MVP/JBL/Kane/Brian Kendrick, Undertaker v Orton, Tajiri/Eddie v TWGTT, Kurt Angle v BikerTaker, The Rock v The Dudleyz in a Table Match, Jeff Hardy v Triple H for the IC Title, Rock v Triple H from the first show, TLC III and Edge v Eddie Guerrero in perhaps the greatest bout in the collection.

The lack of the Smackdown Six is a real shame. Benoit is shown on the third disc (during the entrances for TLC III, he’s basically filling the screen and, at the end, he’s the one who brings down the titles), but his overall contribution to the show was so, so much more than that. The SS revived tag-team wrestling in WWE after it had lulled post-Dudleys, E&C and Hardys. The matches of Edge & Rey v Angle & Benoit v Los Guerreros (in various combinations of straight tags, three-ways, singles, three-way singles, etc) were amazing and THE reason to tune into the show. That they don’t even get a mention is heartbreaking, although, by the same token, completely understandable.

Away from the matches, the moments shown vary in quality and worthiness. The tributes for both Eddie and 9/11 were powerful episodes and they still retain that power to this day. No matter how much time was given to them, it wasn’t enough. Outside the serious segments, there’s also plenty of comedy on show (yes, Kurt in a cowboy hat is on there). From Debra’s cookies to Austin and Angle singing for Vince’s affection, the comedy is usually of the golden variety.

Some of the picks are obviously out of place, while others deserve to be here, but not in the order presented. You will have your own Smackdown moment that you feel merits a spot and you will watch this set and wonder how in the blue hell did THAT get included, but, for the most part, this is a great look back over ten years of greatness.

It’s a great history lesson for those who became fans in the last few years and although some of the segments could have been longer, it should make you search out other clips, segments and matches from that era. The matches on show are also pretty special.

The format of a few clips, some talking heads, back to Cole and Striker, all interspersed with matches works phenomenally well and is a method that should be used for future special releases. My main gripe is that there are no extras, which is a bit of a disgrace considering the wealth of footage available, but, with nearly nine hours of Smackdown goodness, it’s easy to get too greedy.

I recommend this to everyone and, finally, this should go a long way to disproving the theory that Smackdown is the feeble little brother of RAW. If anything, they are bona-fide equals and, more recently, Smackdown has become the “A” show among WWE’s weekly broadcasts.

Here’s to another ten years of blue-brand greatness.