It has widely been considered that Smackdown, while taking a back seat to RAW in WWE management’s eyes, has been the show to watch for the better in-ring action WWE has to offer. Normally, the matches are given more time and the wrestlers are allowed to work a lot harder, be they opening acts or PPV headliners.

With that in mind, what you have here is a three-disc look at the best the “Blue Brand” had to offer from October 2009 to September 2010. Great matches under a variety or situations (titles on the line, three ways, Diva action, tag-matches, etc) are featured alongside a look at the highlights for each of the twelve months. 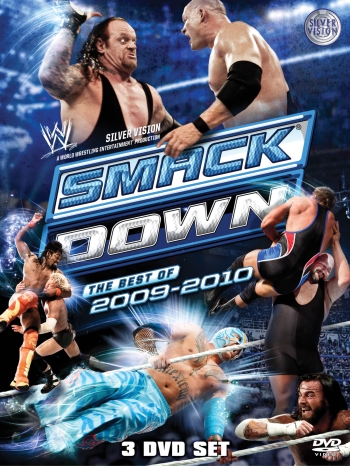 Matt Striker and Josh Matthews are our hosts (taped during an actual Smackdown taping) and the set opens with a look at October and the fantastic turn of CM Punk into the straight-edge heel we know today. A pre-taped promo from The Rock is an early highlight that shows what can be done when wrestlers aren’t working directly from a script – although, it’s worth remembering that this is The Rock, so it was always going to be awesome. However, it’s also interesting that Rock uses toilet humour in the same vein John Cena does today, yet everyone ate it up when The Rock did it, while Cena gets lambasting for doing the same.,

The rest of the year is filled with great matches and some stunning segments, with the formation of the Straight Edge Society (still the greatest example of how to repackage someone into a gimmick completely at odds with the earlier persona and still have it make perfect sense) and the genuinely disturbing moment Punk sang for Rey Mysterio’s daughter on her birthday being the benchmark for the show.

Inside the ring, the 8- and 10-Man Tag Matches are brilliant, while Morrison v Ziggler in a 2-out-of-3 Falls Match is possibly the perfect TV wrestling bout featuring two young guys who have amazing upsides if protected and used correctly.

Other gems include the arrival of Alberto Del Rio (the breakout of the last 12mths), Rey Mysterio in great encounters against Undertaker, CM Punk, Del Rio, Batista and Jack Swagger, Edge & Christian appearing on screen together for the first time in many years, the evolution of Lay-Cool and their feud with Beth Phoenix, the recapping of The Brothers of Destruction’s history and the obligatory Battle Royal.

Obviously, with this being a “best of” collection, the dross is overlooked for the most part. The choice of matches are top-notch overall, with only the Drew/Kaval match seeming out of place, mainly because it lasts less than thirty-seconds. Drew McIntyre’s bout with Undertaker is better and I know for a fact the former Mr. Galloway ticked off one of his dreams that night.

I can remember back in the day buying the VHS releases of WWF Year in Review 19**, so these sets are a hark back to those days and it’s nice to have a set of the great matches/angles from the TV shows in one easy place. Of course, as with any set where cherry-picking takes place, there’s going to be something missing you feel should be here and something here that baffles you in regards to its inclusion.

The lack of extras is annoying, but apart from that, this is a great three-disc set and a worthy purchase… especially if you go by the name of Jimmy Redman.