The most watched TV show on Cable on a Monday night in the USA, the most watched sports show on Sky TV in the UK has finally came out in new video format. From 1997- 1999 the two video’s showcase all the best bits of RAW is WAR. All the top superstars from Undertaker, Kane, The Rock and Stone Cold Steve Austin are in the videos. All the top feuds Austin VS McMahon, Kane VS Undertaker and many more. 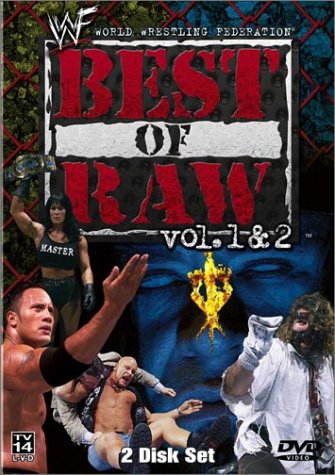 Best of Raw Volume 1, from 1997 up to 1998 this video has all the greatest highlights from this year in the WWF. The main basis of the video is the famous Austin VS McMahon feud. This video details all the matches, promos and stunts that were involved in this feud. Austin VS McMahon was the biggest feud of that year and it included all the best bits of the feud. The video also has a lot of coverage of Kane VS Undertaker, When Kane made his WWF debut and all of the coverage between the two superstars. This is a detailed account of the feud between the brothers of destruction. It covers all the matches and all the story lines between them. But its not just the brothers fighting its the brothers teaming up with each other. Also the video features lots more of action, DX, Mick Foley, The Nation and Val Venis.

In this section the funniest part has to be the DX angles. It covers the birth of the new DX, it covers everything concerning DX. Cactus Jack & Terry Funk VS New Age Outlaws, and when the new DX was born. It is very funny when DX wage the war on The Nation by mocking them, HHH as The Rock, Road Dogg and D’Lo very funny. With all due respect to Owen Hart its very funny when Jason Sensation impersonates him. Very funny stuff.

The worst part in the video is Val Venis VS Kaienti. Purely because it is so stupid. The basis is Val is having an affair with the lead member of Kaienti and he battles them.

In the most eventful year of WWF history, this video documents all the action from November 1998 up until December 1999. The main basis of the video is The Undertaker and his Ministry faction. It showcase’s all the action from Undertaker starting the faction too the unholy wedding and the whole higher power stuff. The video also cover’s 1998 Survivor Series aftermath. It highlights The Corporation, and Austin VS McMahon. It highlights HHH and his change of persona into” The Game”.

The best bits in the video is the action leading up to Wrestlemania XV, when Stone Cold VS The Rock and the whole destruction of Mr McMahons corporate empire. A really good and very funny part is when Vince trains to be in the Royal Rumble of 1999. The video covers all the Austin VS McMahon events including the Beer truck incident. The Austin McMahon feud carries on into the later part of the video when McMahon forms the Corporate Ministry and Austin is the thorn in McMahon’s side.

Another very good section of the video is the Mankind VS Rock feuds. It is well covered, highlighting all the great matches they’ve had including, PPV matches and the half time heat match. But whats better than these two greats fighting each other?

When The Rock and Mankind team up it is truly a great storyline and very funny. Both Foley and Rocky have the comedy and the wrestling skills. The Rock ‘N’ Sock Connection is truly of the most unlikely but very entertaining teams to ever grace the WWF ring.

The low point of the whole of volume 2, has to be the coverage of Mark Henry & Chyna. Please some one pass me the sick bag. With Chyna’s terrible acting and ‘Sexual Chocolates’ thing about ugly women its a disgrace. I thought it was ‘The Best’ not ‘The Worst’. A section on Billy Gunn or the big show would have been better!

This Best of RAW collection is great. With all the highlights from the most watched WWF show ever it is a collection of the biggest stunt’s, the funniest moments and the best matches from 1997- 1999. It is much better paying the little extra and getting both titles on DVD than VHS format. All the DVD extra’s are well worth it and this truly is a “BEST OF RAW”.