Back in the mid-90s, WWE would produce a “Year in Review” VHS release and I’d snap them up every time. Even now, the 1995 one, hosted by the one and only Dok Hendrix. The basic crux of these releases was to sum up the previous 12mths and present to you the best action and storylines from that time period.

The Best of RAW 2010 doesn’t stray from that winning formula and is pretty much as “Ronseal” a wrestling DVD can get, featuring great matches, interesting promos, surprise appearances and all the top WWE superstars who made their mark at the end of the decade.

Kicking off with the most highly anticipated return in history, it looked like 2010 was going to be a “vintage” year for the promotion… 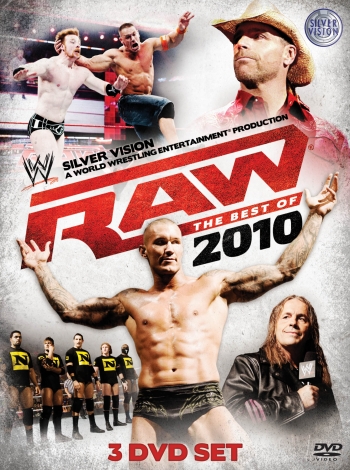 The return of Bret Hart was quite the hot topic in the days leading up to the first RAW of 2010. The moment didn’t live up to the hype, but seeing Bret Hart in a WWE ring, hugging Shawn Michaels (and apparently burying the hatchet for real at the same time) was a sight most of us thought we’d never see after twelve long years of bitterness and fence-mending.

Other non-match highlights from the year that stand out are the debut of Nexus (what a shocking surprise this was and, to add to it, the angle played out beautifully), Santino’s tea party in London, Piper’s Pit with Cena and Orton, Miz cashing in Money in the Bank, the entire build leading up to Undertaker v HBK II, the night after that awesome match, the surprisingly enjoyable shenanigans of both JeriShow and Show-Miz, the introduction of the anonymous RAW General Manager, the elevation of Michael Cole into a bona-fide heel you love to hate, the evolution (no pun intended) of Randy Orton, CM Punk’s verbal excellence and Batista’s hissy fit.

As per usual, the WWE production team deserve a special mention for their awesome work in building feuds and their ability to make a match, any match, seem like the most important happening in the promotion.

Starting with the biggest story of the year and ending with a nothing match, this seems to have it’s ass on backwards, but The Best of RAW is exactly that, the best storylines, matches and promos from the previous 12mth span, all rolled onto three shiny discs (two if you go Blu-Ray, the latter of which has some extra content) for you to enjoy.

Some awesome matches make this fantastic value if you can get it from around £14-18, with the Santino tea party showing how funny in the US promotions should and can be done. In-ring, witnessing the evolution and rise of a fair number of new guys was refreshing and, on a personal note, seeing Daniel Bryan do so well in WWE is something to behold.

As I said for the 2009 edition, this is a much better purchase than first impressions would lead you to believe. Far from being written off as a dud of a year, 2010 had plenty to crow about.