Welcome once again to that little corner of W101 that’s looks at all the latest WWE Video and DVD releases. Now I know I haven’t been around for a while, but I’m back and I’m ready to review. So without further a do lets have a look at our first victim, WWE Confidential has been a series of programming running on TNN over the other side of the Atlantic, and it has been something us UK fans have desperately wanted to see. Well you can now, with this new VHS/DVD release, it contains all the best bits of the TV show plus much more. So is this something all WWE fans should have or is it something that the WWE should have kept Confidential? lets find out. 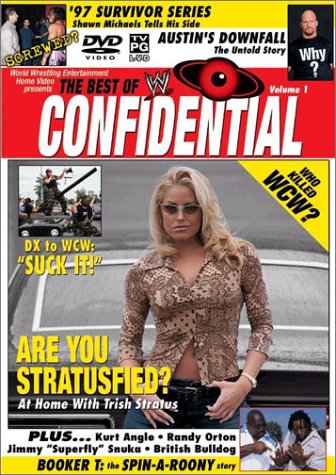 Well first things first, for those people who don’t know what Confidential is about, it’s a TV show presented by everyone’s favourite WWE personality Mene Gene Okerlund, the magazine show looks at some of the most interesting and controversial stories in World Wrestling Entertainment. The show has looked at stories such as The Survivor Series ’97 “Screw Job” and The History of the WCW Championship. The show also looks at some of the legends of the business people such as Bobby Heenan, The British Bulldog and Jimmy Snuka. And finally the show lets you have access to the WWE Superstars away from the ring, at home, training or just hanging out with other superstars. So lets take a look at Confidential.

When I watched this video I had mixed feelings about what to expect, firstly I was looking forward to seeing some of the interviews with the superstars and seeing some of the old WCW footage, but also I knew that no matter what this VHS/DVD said on the tin, it wasn’t going to “bare all”, although it was going to shed some light on the events which have happened in the past, it wasn’t going to look at anyone else but the WWE in a good light, so with that in mind I grabbed a bag of munchies, a large glass of something nice, and pressed Play on the VCR.

Well this show was spilt into chapters looking at different people, events and stories from the world of the WWE. I’d be hear all day if I were to review them all, so I’m going to pick my best bits and my not so best bits from the VHS/DVD and give you the low-down on them.

I’ll start with something good; The VHS/DVD looks at some of the legends of the industry, starting with The British Bulldog. This segment looks at the career of this legend with interviews from Diana his wife and many WWE superstars who all pay tribute to the Bulldog. We look briefly at how his career started up with him and Tom Billington getting a chance in Stu Hart’s Stampede Wrestling. The segment also looks at the highlight of the Bulldog’s career when he got the chance to perform at Wembley Stadium at Summerslam 1992, and for those who are lucky enough to have the DVD you can watch the full match as one of the extras.  Moving on to another wrestling legend, Jimmy Snuka. In this segment we look at his career and life in and out side the ring. Jimmy talks candidly about everything, from that faithful leap from the top of the steel cage that made him a famous, to the exploits outside of the ring; this is also another segment that is well worth watching. And the final legend to be looked at in this instalment is Bobby Heenan, one of the greatest wrestling managers of all time. The VHS /DVD looks briefly at his career in WWE, some of the more comical moments, nice way to pay tribute to one of the best.

From good to bad, as the next chapter I’m going to look at next is the coverage of Stone Cold Steve Austin’s departure from the WWE in June 2002. This capture looks at the events surrounding his departure, including the Byte This Reports with both Austin and Vince McMahon plus some interviews with Jim Ross and Vince McMahon. For anyone who has never seen it, this is the WWE’s side of the story as to why Austin left, with both Jim Ross and Vince McMahon giving Austin a verbal beat-down, saying that they are very disappointed in him, etc, etc. All this footage was rammed down our throats on WWE TV when Stone Cold left so its nothing really new. If you have seen this once before I’d hit the fast-forward button because its old news now. Pretty boring stuff once you have already seen it.

Moving onto something a little more positive this VHS/DVD looks at the history of World Championship Wrestling, and the first stop is the demise of WCW. Well this is a really interesting segment, we all know about some of WCW’s biggest mistakes but this lets us hear from some of WCW’s top stars about some of the things that killed a once thriving company. We hear from Eric Bischoff talking about the fact that WCW had no infrastructure, Big Show, Booker T and Chris Jericho all talk about their frustrations with the company and what they thought about Eric Bischoff and the WCW management. The segment also looks at how the New World Order was one of WCW’s best and worse mistakes. This segment is pretty good, however it only looks  at WCW until 1998, which is a shame really because we all know the mistakes of WCW would be nothing compared to the mistake they made when they employed a certain Mr Russo, who well and truly ran WCW to the ground, but I suppose they be leaving that to another day.

Moving on, we look at the history of the WCW Championship, this segment covers the transition from the NWA World Heavyweight Championship to the WCW World Heavyweight Championship. Looking at Buddy Rogers, Ric Flair and Harley Race when they won the championship, right up to when Booker T captured the WCW Championship on the final WCW Nitro. Then the VHS/DVD moves onto to look at some of the World Champions that have all graced the canvas in WCW. Looking at Dusty Rhodes, Sting, DDP, Goldberg, Hulk Hogan and many more. I found this segment the most interesting because of what some of the superstars thought about some of the people who have been WCW Champion, interesting to see what they say about DDP, Hogan and Sting. Anyway, all in all excellently put together and well worth buying for this segment alone.

I’ll be honest with you, I really hate it when WWE programmes go behind the scenes to look at how the superstars live their life off screen, to be honest I couldn’t care less, so this is why I didn’t enjoy these segments at all. Firstly looking around the home of Trish Stratus. Trish shows us around her luxury home telling us about everything. It bored me really, I don’t know if a female fan would find it interesting but as for me, no thanks. Next up, looking at the reptiles William Regal keeps. The Blackpool native talks about the pets he has and how he got started being a fancier of the reptile nature. Again I thought this wasn’t very interesting, although it was better than looking around Trish’s house it still wasn’t half as good as some of the things this VHS/DVD contains. And my final victim is when Booker T met Levon Kirkland, who is a US footballer player who has been known to be a fan of the “5 time WCW Champion”. Firstly I didn’t have a clue who Levon Kirk was, secondly I don’t know I just felt that this segment was pointless and the time could have been used to show something better, and finally I just didn’t like it. I’ll be fair, I’m sure US fans will be more familiar with Levon Kirk and probably find this segment more interesting, but not me. Overall I didn’t really like these three segments, but you guessed that already didn’t you? Other people would probably find them more interesting than me, its all down to taste.

This VHS/DVD was packed with many more quality segments including a look at the Orton family, the Samoan family tree, the story of Survivor Series 1997 and many more confidential stories.

You may be surprised to hear this but I really enjoyed this VHS/DVD. It was packed with great interviews, some great stories and really good entertainment. Although it didn’t have the full story on a lot of things such as Stone Cold Steve Austin’s situation and Survivor Series 1997 incident it did explain some things I never knew. Personally as wrestling history goes I’m not that clued up, so I found the history of WCW very interesting, however a more “knowledgeable” fan may find this all very uninteresting. To fully enjoy this it all depends on what type of wrestling fan you are. By looking at the chapter listing you can see WWE have tried to give a variety of things to please all fans, I think it has worked well. If you like wrestling history then you got WCW’s past, if you like to know about the more “controversial” incidents this VHS/DVD has its fair share, and if you like to follow the superstars lives behind the curtain then it has plenty to fill your appetite, and if you are a fan that enjoys all of the above then lucky you.

This DVD boats some great extras and the highlight of which is the Bret Hart vs. British Bulldog match, it is truly outstanding. If I were planning to buy Confidential I’d would defiantly go for the DVD, it has a lot of great features, however if you are unable to play DVD’s go for the VHS that is also first rate. I would highly recommend any WWE fan to purchase this, head over to any good VHS and DVD stockist and purchase this fantastic product, I’m sure you will enjoy it.