To make sure I had enough material to review for the TWO Video Games week, I decided to buy a few games. So I went to my local Game store, and picked up WWE Crush Hour and Pride FC. When I was in the queue to pay for my games, I noticed something out of the corner of my eye. In the Pre-Owned section of the shop was a copy of the legendary WCW Backstage Assault. Yes, the infamous game in which EA decided to get rid of the ring in a wrestling game, and have every match backstage. Until now, I had always kept well away from titles with dodgy reputations, but the lure of WCW:BA was too much. Maybe it was one of these games that unfairly got dismissed, just like SD!JBI, because people heard too many untrue stories about how the game was utterly awful, and we should all keep away from it. Well, after adding the game to my collection (Don’t tell me I don’t make sacrifices for TWO…I BOUGHT WCW BACKSTAGE ASSAULT!!), it’s time to find out if the majority were right. Here’s the review. 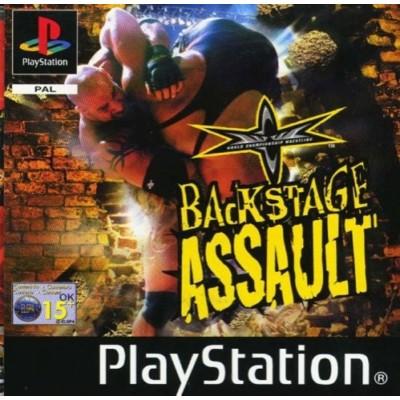 The visuals in WCW Backstage Assault are so bad that they’re vomit inducing. Incredibly, the graphics seemed to have got WORSE since WCW Mayhem, which is remarkable considering how awful the graphics were in that game. They’re still as chunky, with big jagged edges sticking out of the character models, but the faces of the wrestlers are terrible. If it wasn’t for the costumes (And in some cases, many wrestlers have never worn the attire they sport in this game) and movelists, then you wouldn’t have a clue who the guy you’re controlling is meant to be. As for the quality of the crowds, there are none, seeing as how the game is set entirely backstage. The rooms themselves are slightly better than EA’s efforts in Mayhem, but they’re still pitiful. The graphics were bad then, and I don’t think I can think of a word that could describe them today without bringing out the F Bombs. 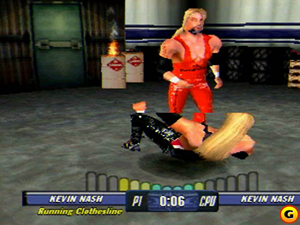 If EA did one thing right, it’s that they added real wrestler’s themes, which were sorely missed in Mayhem. The commentary is still the best I’ve ever heard in a wrestling game, but it does sound like a lot of it was recycled from WCW Mayhem, with Heenan and Schiavonne using the same lines that they did the in previous WCW game. As per usual, the in game music is awful, but the good quality commentary and the use of real music makes the audio side one of the best features about WCW Backstage Assault. 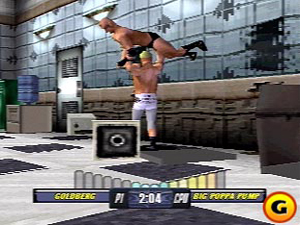 Another backwards step by EA. For some reason, the game engine seems to have regressed in quality, just like the graphics. The controls are extremely unresponsive, and there are some times that you’re waiting seconds before your character moves on screen after a button press. Another unwanted new feature is the ever-changing camera angle. Yes, it does make it look more like a wrestling show when the camera angle changes. However, it makes the game really frustrating to play, as you can be ready to hit a big move when the camera suddenly changes, and you’re left vulnerable for a few seconds as you try to adapt to the new environment. Then there’s the fact that the whole game is backstage. It’s just not the same Irish Whipping your opponent into a stack of tires, or climbing up to the top of a pile of boxes. The location of the game does affect gameplay, as you’re less likely to use a snapmare or headlock takedown when there’s flaming two by fours lying on the floor, which do much more damage. What results is less like a wrestling game, and more like a “hit your opponent with a weapon more times than he hits you” game. And the latter is a lot more tedious than the former. On the plus side, there’s a lot of interactivity in the backstage arenas, and the WCW Mayhem engine is still playable, but that’s not enough to save WCW BA from a poor score in the gameplay department.

There are the usual exhibition and survival (or gauntlet) modes to be found here, but there’s not a proper career mode, so to speak. What you get is different “Hardcore Challenges”, which see you take part in matches challenging for the title of your choice. There’s nothing here except match after match, but things are made more bearable by the fact that you get different challenges, in which you can unlock things. The Torch match is quite fun as a well, as you try to set your opponent on fire before he does the same to you. It’s not the worst selection of modes ever seen in a wrestling game, but you would expect a proper career mode, seeing as how the rival Smackdown! games have been doing it since their first title in the series.

Very similar to WCW Mayhem’s Create A Wrestler Mode, which isn’t great news. There are a lot of small, yet frustrating elements in Backstage Assault’s CAW mode, namely the fact that you can’t change colours. As for choosing your characters’ moves, you’re limited by points, so that prevents you from making a lot of real life wrestlers not in WCW at the time with accurate movesets. The fact that you can pick a name to be spoken in the game is a nice feature, but with only 6 spaces available to store your creations, this is another area that has become less enjoyable since WCW Mayhem.

There are 50 characters in the game, which is certainly impressive, but the annoying thing is that you have to unlock most of them. And the decision on which guys to have playable from the start must have been made by a non-wrestling fan. You have to unlock Lance Storm and Rey Jnr, but you can play as Eric Bischoff from the start? Anyway, once you unlock everyone it’s a pretty impressive selection of characters for you to pick from, but before you unlock them all, you’re not going to be overwhelmed.

While there may not be a proper career mode, there are an awful lot of things to unlock in Backstage Assault. As well as new characters and move points, you can unlock new backstage arenas. It’s certainly not going to take you a day or two to obtain all the secrets, but the main factor affecting the lastability is whether you can stand to play the game long enough just to unlock a new room which looks pretty much identical to the last one you unlocked.

Overall (Not An Average)

I was surprised. Judging by some reviews, WCW Backstage Assault was the greatest disaster in the history of mankind, and certainly wasn’t playable. But what I found is that even although the game was really hurt by the lack of a wrestling ring, it’s still not the worst wrestling game I’ve played. Yes, it plays poorly, lacks a proper career mode, has a terrible Create A Wrestler section and looks awful, but there is a lot of depth to the game. Whether you can stay around long enough to find that out depends on how much you enjoy wrestling in the backstage arenas again and again. I really wouldn’t recommend this game to anyone. It’s not as bad as it’s made out to be, but it’s still awful. If you’re looking for a cheap WCW game, Mayhem is a far better option.