By Fletch
Video Game Reviews
This page contains affiliate links. At no additional cost to you, we may earn a commission if you click through and make a purchase. Learn more

3 Years ago, we learnt that Total Nonstop Action Wrestling were starting to produce their own video game, much like WWE have been doing since time can remember. With over 3 years of development going into this inaugural title, and the assistance of avid gaming fans and TNA Superstars such as Samoa Joe and The Phenomenal One, AJ Styles; this game cannot possibly even contemplate failure. Can it? 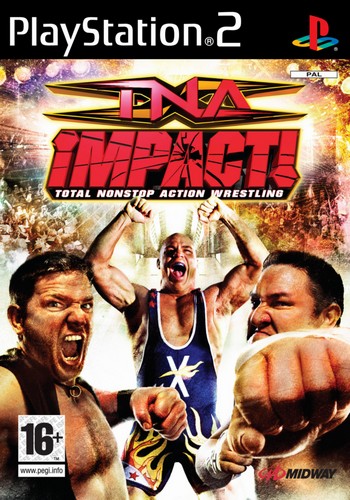 Sadly, despite all the hype, all the build-up, and the aforementioned 3 years of development time and input from TNA stars, the game falls several miles short of what fans, and gamers alike were expected, or should have been given. And it’s not just in one area the game comes up short, it’s almost every possible area.

Having purchased the game, well traded in for Burnout Paradise and Tony Hawk’s Proving Ground; a decision I now greatly regret; I quickly popped the game with much excitement and anticipation, into my 60gb PlayStation 3 console at home. A couple of fancy screens popped up before a beautiful promo trailer came up, featuring TNA clips and some heart wrenching music. Then the main screen popped up, and I was prompted to install some files onto my hard drive. No big deal, lots of Blu-Ray games use this system to shorten loading times and keep valuable files on the disc.

30 minutes later, I was still waiting for the game to finish installing. Having read through the manual several times over, I was now ready to play one of the most anticipated wrestling games of the last few years. Finally, we get to the main menu. The usual options listed, Exhibition matches, Story Mode, Online, Create Mode, Extras, Options. Picking the extras menus first, a nice little addition to the disc was the inclusion of 5 full TNA matches, 3 of which being from yesteryear of the company, featuring guys such as Scott Hall, Jeff Jarrett and Brian Christopher. The other two billed as TNA Game Exclusives. A nice touch. 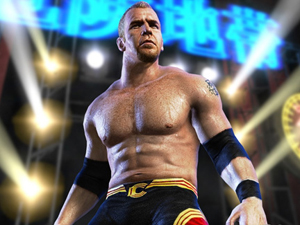 So then on, to playing the game. I opted for an Exhibition match first. The roster pops up, and the flow between the menus really is seamless and well animated. And then the disappointment began to hit. Half the roster was blacked out, needing to be unlocked through the games story mode. Thankfully, many of the Main Event stars such as AJ Styles, Sting, Kurt Angle, Booker T and Christian Cage were all available to start with. So having picked Christian to take on Shark Boy, I awaited. 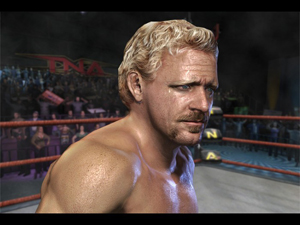 Upon finally starting a match, the visuals are stunning, Well the in-ring visuals. The crowd are much in the same vein as of the old SmackDown games, limited animation and occasionally blackened out entirely. The trouble with the graphics is there’s no difference between a standard TV and an HD TV. Having played the game on both in my home, I can honestly say that my shoddy old 21 inch Television plays the game at the same visual standard as it does on my 40 inch HD Television, There’s no 1080p resolution available, but then arguments can be made that the last SmackDown on PS3 didn’t have that available either.

The sounds, Mike Tenay and Don West rarely speak. And when they do, it’s some inane ramble about nothing to do with action, or one of the most stupid outburst’s heard on commentary. Mike Adamle is turning in his non-existent grave. Lines such as “Oh-No! The Irish Whip” often make you cringe. The sound of the moves into the ring is impressive, but the wrestler’s groans all sound the same, there’s no difference between wrestlers. 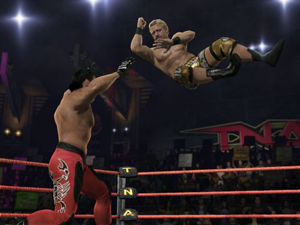 In fact, the only difference between any of the wrestlers on the game are their looks, entrances and finishers. Each guy on the roster comes fully equipped with pretty much the exact same moves list. They have the same reversals, the same animations, same AI and pretty much nothing to differentiate between each roster member. You could forgive Midway for this overlook, but thousands of animations were recorded for the game, by AJ and Joe, and the game has been being produced for over 3 years. Yes. 3 years. Even for a first time outing, this is unacceptable. The SmackDown games for years have offered us grapples from behind, finishers from different positions, different weapons, even grapples from the ground facing down, but TNA having seen all those games and complained of the stranglehold that WWE games had on the market, cannot even take a leaf from the positives of the SmackDown series and borrow them. There is just so much missing from the actual gameplay that we are offered in other games, that it spoils the experience.

The control system is very simplified. And with this, comes a much less robust and in-depth moves list. Many people hate the current SD vs RAW control scheme, but that control setup allows for much more moves to be assigned to each wrestler than this cut down control system does. Not that there are that many moves you could assign anyway. The reversal system is badly flawed, and seems rather hit and miss. The premise is that you can reverse nearly any move, but from playing the game, I can tell you that 9 times out of 10, the button just doesn’t react and you’re left getting the crap kicked out of you until it decides to work.

And then comes the story mode, with an integrated Create A Wrestler. Now the actual basis of the story, is excellent. You play Suicide, a supposed former TNA Wrestler. Suicide was undefeated, and went on to win the TNA Championship, despite advice from LAX to turn down the title match. He didn’t and ended up left for dead in Mexico by the TNA Tag Team. Suffering from amnesia, you get to then reconstruct how Suicide now looks, and a new name for him. The Create a Wrestler then pops up, and you make your guy from there. Again, for a first time effort, it’s poor. There’s a definite lack of options available, so your CAW will never be THAT different to anyone else’s. Perhaps a bonus then for the lack of being able to use them in the Online Mode.

After making your guy, you then face some local jobbers, and move to America to try and make a name and some money. As you progress you unlock moves, and the TNA Wrestlers you beat, eventually having to win the TNA Gold again. Now as great as this sounds, it’s very one dimensional. The story doesn’t branch at all, and should you lose, you have to try again. There’s between 5 to 8 hours worth of gameplay here in this mode, should you win or lose countless times. Having played through it once though, you’re done. There’s no reason to go back and play again, unless you have far too much time on your hands. It decreases the longevity of the game, not that there’s a great amount anyway. Your Created Wrestler doesn’t increase in power or any other stats through the story, so as you progress it becomes increasingly difficult to defeat more powerful superstars, 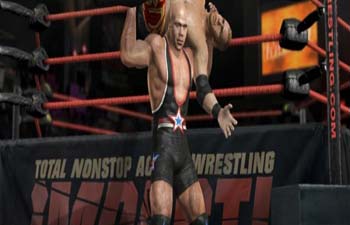 And the Online mode is no better. Often crashing before you can even wrestle a match, there are some serious lag issues on the server and it takes it’s toll on the gameplay. Two types of people play this mode, the braggers and those fun seeking. The fun seekers, are usually your friends, who want a decent fair game, which can be a lot of fun if not for the lag. The braggers, just cheat, beat you to a pulp, then pin you for bragging rights. A downfall of many online games, but more so in this badly flawed game that often can become so infuriatingly difficult to beat someone with quicker fingers. The lack of match types on Online is very limited, but then, the entire game offline suffers the same fate, with at last count, only 6 or 7 different match options available. It’s ironic that a company who pride themselves on innovative matches, can only give us big standard singles, tag or Triple Threat matches, and one of their signature matches in the Ultimate X. There’s no King of the Mountain, no Six Sides of Steel or anything else. It’s just something else missing.

Overall, the game has so much missing it almost feels like a demo. For all intention’s purposes, the game is probably going to be more of a taste of what the next offering will be, but for a game they’ve spent a great deal of time on making and marketing, it feels so empty, dated and just plane frustrating. Trade-In’s will surely be at an all time high. My advice would be to go pick up Legends of Wrestling: Showdown from your local gameshop, because even such a bad game as that put’s TNA’s first Video Game Effort to shame.

Graphics: Looks good, but no different in HD, and the crowd is horrible 7/10

Sounds: The music is samey, and the commentary is below SD vs RAW standard. The ring effects sound brutal though and much more fleshed out than other games 6/10

Gameplay: Flawed, and severely lacking in options. It needs a lot of work, and a patient gamer. 4/10

Longeivity: Very little. One time play of Story Mode, and only 6 match types and a limited roster. 4/10