Five live play TTRPG podcasts you must listen to

Whether you’re a fan of Dungeons & Dragons, Call of Cthulhu, Monster of the Week, or any of the dozens of other tabletop roleplaying game systems out there, you’ll find a plethora of podcasts and video streams where people play these games live for your entertainment.  I’ve gotten kind of obsessed with live play content recently, so I thought I should write this article to share my favorites with you.  These entries aren’t going to be ranked or ordered in any particular way.  For this article, I’m just going to focus on podcasts, and I’ll cover video streams like Critical Role and Dimension 20 in a separate piece.  If I don’t mention a podcast that you really like, please tell me about it in the comments! 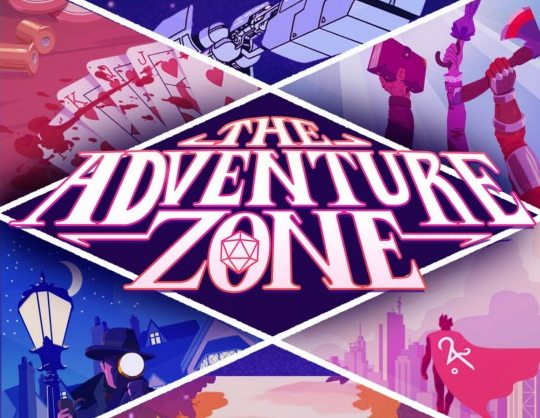 I sort of think of TAZ as the “OG” of live play content, although I will happily defer to anyone who might argue with that designation.  It was certainly the first live play podcast I ever listened to, and it was down to Griffin McElroy’s absolutely brilliant DMing and the chemistry he has with his brothers Travis and Justin, and his dad Clint McElroy.  TAZ has built up a massive fanbase over the years, with fans cosplaying as beloved characters like Taako and Merle and Magnus and so many others.  I can’t count the number of Taako cosplayers I’ve seen at conventions.

The first TAZ campaign, Balance, is an astounding work of art.  The McElroys weave a tale that blends goofy humor, hilarious characters, and just a ton of heart, and before you realize it, you’re stuck in the world and you never want to leave.  The sheer length of the Balance campaign, and how the guys were able to string it together into something not only coherent and engaging, but something with a story and an ending that lands hard, is frankly amazing.  Balance is mostly a pure D&D arc, but Griffin does throw in some innovative surprises to keep things fresh, especially in the Wonderland portion of the story.

TAZ: Amnesty is as good as, if not better than Balance.  Here, the guys play characters that seem as ordinary as you and me.  My favorite is Duck Newton, a sort of hapless park ranger who doesn’t want to be the chosen one.  Amnesty uses the Monster of the Week system to drive the story forward, but again, because of Griffin’s genius DMing, the story becomes so much bigger than the system.  And again, just like Balance, the story wraps up so hard and so perfectly that you just want to give the guys a damn standing ovation.

The current TAZ campaign, Ethersea, started with the guys using a game called The Quiet Year as a framework for designing the world they’d be playing in.  Those prologue episodes are almost more interesting than the game itself, especially for me as a writer, because of the way the guys built the game world.  And now that they’ve fully immersed themselves (pun intended) into the world of Ethersea, those prologue episodes have really added a lot of color to the game.

The guys have delved into a lot of other systems and stories over the years, sometimes as one-offs, sometimes as bonus content, but whatever they do, it’s always a damn delight.  These good good boys know how to play, how to keep an audience entertained, and most importantly, to have a hell of a lot of fun.

It’s also important to note that the McElroys have made it a point in their podcasts to be fierce allies of the LGBTQ community, and queer themes and characters show up frequently in their games.  Their treatment of queer issues is nuanced and important, and I salute them for their genuine allyship.

Be warned: if you’ve never heard of the McElroys, and you start diving into their universe, you will never escape.  They’re everywhere, and they will consume you whole.  Example: their other podcast, My Brother My Brother and Me, is nothing but the brothers bullshitting with each other for an hour and sometimes maybe giving terrible advice.  But it’s absolutely hilarious and brilliant and I listen to it every week, and I cannot escape.  Help me.  I’m caught in a McElroy event horizon, and I’m being slowly devoured… 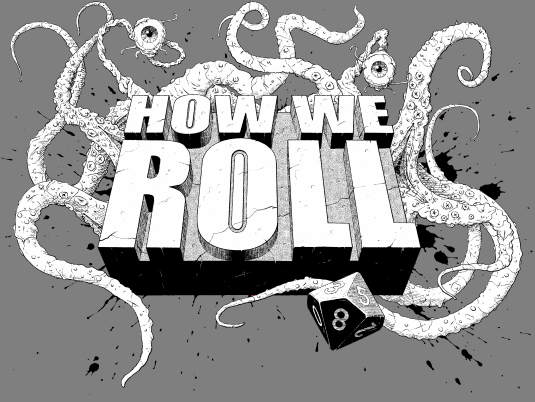 How We Roll is a podcast that focuses primarily on Call of Cthulhu, although they do also play D&D and other systems.

If you’re a fan of the arcane eldritch insanity of Lovecraftian cosmic horror (and who isn’t, really), then this podcast will satisfy that tentacular itch.  In Call of Cthulhu, the players are “investigators,” following a story laid out by the “Keeper of Arcane Lore,” which is the CoC equivalent of a DM.  These investigators – hapless, tiny little human meat sacks up against the incoherent and unnamable horrors of the universe – must find their way through scenarios that, on the surface seem maybe just a little weird, but that actually hide beneath them the inchoate madness that lies beyond the realms of reality.  In CoC games, there’s usually not a “winning” scenario – the best your character can generally hope for is to not go mad – or, if you’re a different kind of player, to go mad.

The majordomo of How We Roll is Joe Trier, and he’s a player and game master on the podcast.  A real highlight of the show is Scott Dorward, who frequently plays keeper.  Scott is a writer for the Call of Cthulhu game, and on How We Roll, he frequently runs scenarios that he himself has written or co-written.  It’s incredible to listen to him lead his parties through these absolutely bonkers Lovecraftian scenarios, and he’s a damn expert at keeping not just the players, but the audience, engaged.

How We Roll is currently running two separate scenarios on alternating weeks – a Dungeons & Dragons campaign based on Curse of Strahd, and a Pulp Cthulhu (a similar but different TTRPG system to regular Call of Cthulhu) campaign called Two Headed Serpent.  I’ve listened through the Two Headed Serpent campaign, and it is both terrifying and hilarious in equal measures.  I can’t really say much about it without spoilers, but suffice it to say it involves a crazy snake cult in Oklahoma, a mysterious organization in New York that may or may not be plotting to destroy the world – or they might be the good guys – and, well, the whole story goes from weird to weirder in the best possible way.

There’s a tangential benefit to the How We Roll podcast, and that’s an active and wonderful Discord community.  The How We Roll discord is full of Lovecraft fans, role playing fanatics, and generally weird and wonderful people, and it’s a real hoot to interact with all of them.

And tangential to that tangent is this other tangent.  There’s another podcast called The Good Friends of Jackson Elias, which is headed up by Scott Dorward, Paul Fricker, and Matt Sanderson, all three of whom are Call of Cthulhu RPG writers.  Good Friends is a fascinating podcast in its own right, with deep dives into weird fiction, Lovecraftian mythos, and other strange and sinister topics.  But the Good Friends podcast also has a fantastic Discord community, and that community organizes virtual “conventions” where anyone in the world can pick up a Call of Cthulhu game and play it online with some really great people.  In the most recent convention, I played four one-shot CoC games with some fantastic Keepers and players ,and I just had an absolute blast.  You can even, if you’re lucky, get into a game with Scott Dorward himself, or other high up CoC muckety mucks. 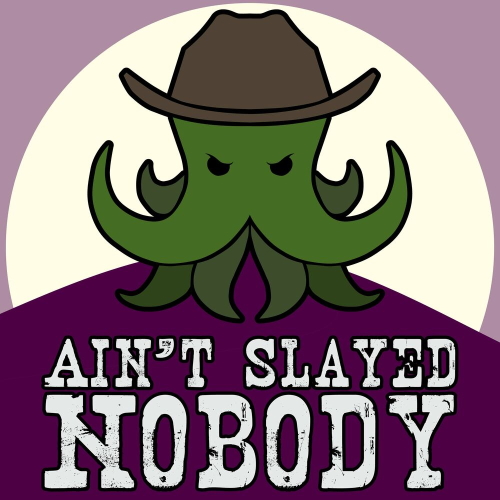 Ain’t Slayed Nobody is another fantastic Call of Cthulhu live play podcast.  Keeper Cuppy Cup (that’s the name he goes by) leads a team of investigators in a “down darker trails” campaign set in the “Weird West.”  Cowboys and shoggoths, as it were.  It’s a totally different and completely engaging take on the Cthulhu mythos seen through an Old West lens, and the stories and characters are weird and wonderful.

There’s another reason I put ASN right after HWR, and that’s because the two podcasts frequently collaborate, and ASN also has a fantastic Discord community!  The fact is that these CoC podcasts are wonderfully collaborative places where the weirdest and most creative people on the Internet can let their freaky freaky flags fly, and I am here for all of it. 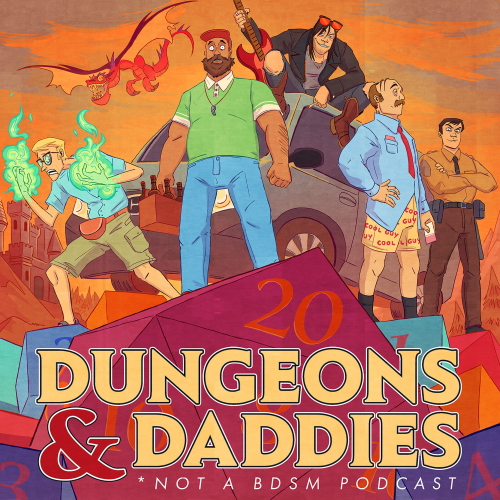 Dungeons & Daddies is a hilarious take on classic D&D with a great emotional core and some fantastic voice acting.  The characters play various kinds of “dad” – the hapless stepdad, the over-enthusiastic sports dad, the hippie granola dad – and they fall through some kind of portal and end up in a D&D type world where each of them discovers they’re actually a particular class of hero.  Weird stuff happens with their kids, and they have to solve a series of mysteries and figure out how to get home, and they still drive a minivan through the magical realms that they adventure through.

I really like this podcast because 1) it’s kind of hilarious – Ron Stampler in particular, the well-meaning but sort of hapless stepdad, is just a fantastic character – and 2) it has a ton of heart, and a surprising emotional heft to some of the plot points.  You can really get invested in these dads and their struggle to keep their kids safe.  It’s engaging and relatable content, while still being as weird and fantastical as D&D ever gets. 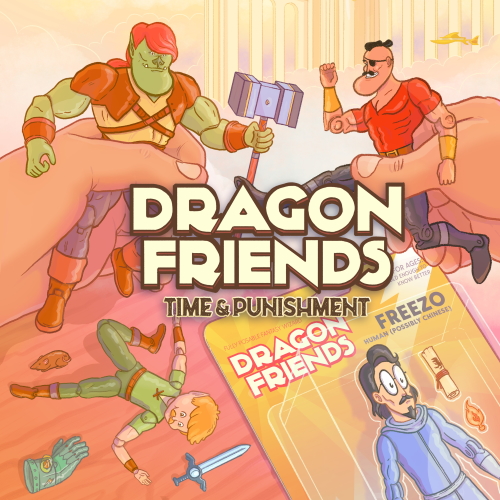 Dragon Friends is a podcast helmed by a team of hysterically funny Australian comedians.  DM Dave Harmon tries his valiant best to keep the rest of the crew focused and moving forward in the adventure, but each episode will quite often go completely off the rails and into the most absurd and frequently raunchy hilarity.  Comedian Michael Hing voices the characters of Freezo and Lionshield Banknote, and he seems to be Dave Harmon’s most frequent antagonist, purposely going off on tangents about things not said in polite company…ahem…but doing so in a way that I have scream-laughed at on numerous occasions.  Not that the others are any less guilty of going bonkers with the plot – Alex Lee, who plays the half-orc Philge, is a frequent source of random hilarity, and Simon Greiner’s Bobby Pancakes…well, you’ll really just have to listen for yourself, now won’t you?  Ben Jenkins voices a lot of the NPC characters with help from Dave Harmon, and even he is prone to going off the rails, causing Dave no end of consternation.

So that’s five of the best TTRPG live play podcasts out there.  There are many others, but these are my favorites.  If you have a favorite TTRPG podcast that I didn’t mention here, please let me know about it in the comments.  I’m always looking for more of this stuff.  I frankly can’t get enough of it.