The SNES Turns 30: A look at some of the system’s best games

Thirty years ago (more or less, depending on if you’re in Asia where it’s more, or Europe where it’s less), Nintendo released their follow-up to the Nintendo Entertainment System, the SNES. Today, it’s taken as a given that consoles have a shelf-life of 5-10 years before they’re replaced with an upgraded model. Back in the early ’90s however, those expectations were hardly codified. A few console manufacturers released new versions of their systems, but all the ones from companies worth their salt were backward compatible, often using the same controllers/ports, in addition to having the same slots to play older games with ease. Nintendo toyed with the idea of making the SNES compatible with the NES but ultimately decided against it, gambling that the system would be strong enough to stand on its own.

Parents—none of whom grew up with video games as a ubiquitous part of life, as it is today—initially dismissed the SNES as a cheap marketing tactic designed to make parents who already owned the NES have to buy the same console twice. It didn’t take long however for the system to prove itself a legit successor to the original machine, capable of doing things you never could with an NES.

For the rest of the decade, Nintendo released game after game for the SNES and perfected the 2D game mechanics that had defined video games from the inception of the medium. This year, as the system turns 30 in North America, we’re taking a look back to consider the best games and the best soundtracks the SNES had to offer.

Nintendo had fewer competitors in the 90s than they do today. In the modern era, they’re competing against Sony’s Playstation, Microsoft’s X-Box, a huge PC market, and the plethora of cheap mobile games that clog up all our cell phones. Back then, however, there was just Nintendo and SEGA. Sure there was NEO GEO, there was PC Engine, there was Atari, but they were all small time. PC games were so radically different they were basically apples and oranges compared to console machines.

Back in the 90s, you were either a Nintendo kid or a SEGA kid and whichever you were, you had the games to brag about on the playground. SEGA had Sonic, Gunstar Heroes, Vectorman, the best sports games, the Mortal Kombat with blood, the 32X attachment, the CD attachment, the optional six-button controller, and on and on the list went. If you were a Nintendo kid, you had your little grey and purple box without any attachments, without any controller additions, without any gimmicks. You just had the games. SEGA had Sonic, Nintendo had Mario. SEGA had Gunstar Heroes, Nintendo had Super Metroid. SEGA had Vectorman, Nintendo had Donkey Kong Country. SEGA had “games and ____.” Nintendo just had games. But oh what games they were.

Here are four titles in particular that helped define the SNES and all it could be. 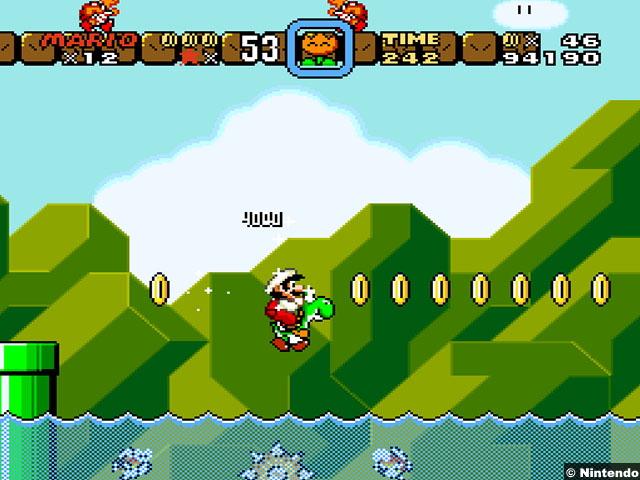 Though it’s considered an inseparable pairing today, it’s a matter of fact that the original NES console did not always come with Super Mario Bros. packed in with it. Some had Track and Field. Others had Gyromite. Some systems were sold without any game along for the ride. The system I had as a kid, which was the system my older brother was gifted for X-Mas (I was only a year old when it came out), came with Super Mario Bros. and Duck Hunt as a combo-game pack-in. That was the most popular version and helped propel the system to unpreceded sales, and made Mario the company’s official mascot. The next two 2D action games featuring the plumber were among the system’s best-selling titles, and Super Mario Bros. 3 in particular had a launch that rivals the monstrous releases of today’s triple-A titles, in an era where video games were just a niche market.

When it came time to sell the SNES, Nintendo made the wise choice to pair every console with Super Mario World. The game was not only the perfect representation for what a 16 Bit 2D adventure could be (bigger levels, more robust music, secrets bursting out of the seams) but it also perfectly highlighted every little graphical trick the system was capable of. There are rotating sprites, transparent layers, tons of colors, parallax scrolling, and more. For many, Super Mario Bros. 3 was the pinnacle of the 2D action platformer, but Super Mario World came out hot on its heels and instantly became the (then) definitive 2D adventure platformer. 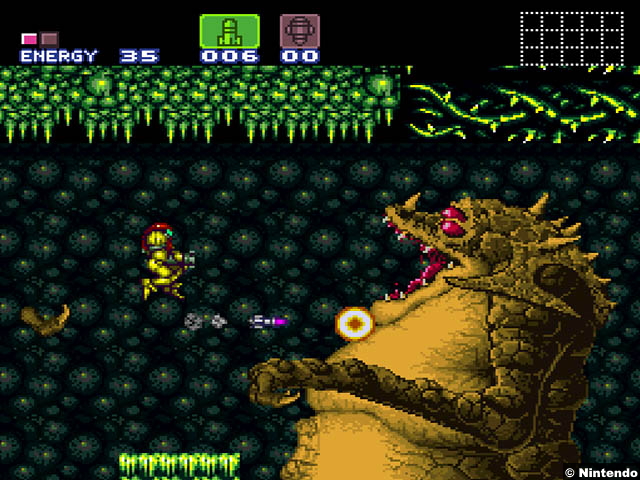 Atmosphere is not a thing that was commonly appreciated in NES games, and certainly not in games from systems before that.  The bleep-and-bloop soundtracks, small sprites, and arcade-esque gameplay didn’t lend itself to things like “mood” and “tone.” The additional resources provided by the SNES, however, created something previously unfathomed in a home console game. It’s one thing to walk from left to right in Castlevania I-III for the NES, with small, pixelated bats flying toward you as you traverse an orange and blue blocky background; it’s an entirely different thing when there’s fog, the large medusa heads, and simulated thunder and lightning flashing and cracking on the screen, as there is in Super Castlevania IV.

On the NES, Samus Aran explored a very drab, simplistic world of Zebes. Mostly it was a blue hallway with a black background or a yellow hallway with a black background. Sometimes there was a pink hallway with a black background. For an NES title, it was impressive but limited to what it could do to establish the vibe the creators were going for. On the SNES title, however, the resources available meant the player could feel the isolation Samus was dealing with in-game. It danced between being creepy, melancholic, heroic, suspenseful, and more. Every new environment was filled with puzzles to solve and enemies to contend with, but it was the mood the game established that helped it to be regarded as one of the greatest games ever, a claim it remains worthy of today: Long after the pixels and sprites have become passe, the game’s atmosphere helps keep it fresh. 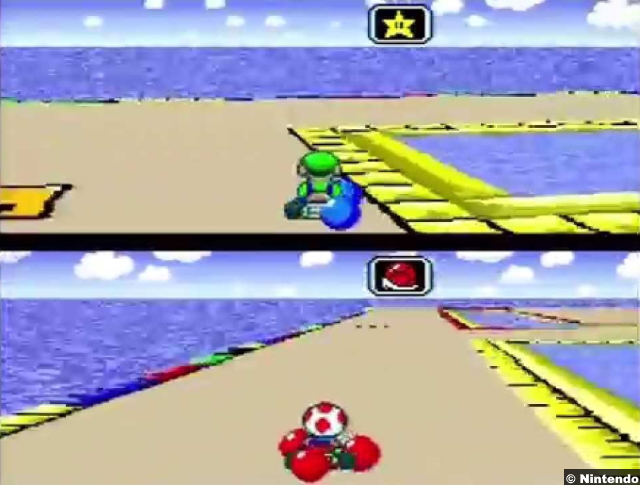 Nintendo would really shake things up with the N64 and its four controller ports, turning that system into the ultimate dorm room party machine (hat tip to GoldenEye and No Mercy 64 for playing a big role there), and while the NES before it was no stranger to two-player gaming, it was really the SNES where the notion of multiplayer fun came into its own. In the NES era, “playing two-player” often meant waiting your turn. You were Luigi and you had to wait for Mario to die. Some offered co-op fun, such as the Teenage Mutant Ninja Turtles games, Contra, and Double Dragon, but they were all limited to showing one screen for both players, meaning you were either following the character in the lead or waiting on the character behind you to catch up.

The SNES, however, had the horsepower to offer simultaneous gameplay with two different screens showing two different events unfolding, and the game that best exemplified this new possibility was Super Mario Kart. It was a title that Nintendo thought little of at first, regarding it more as a proof of concept title, designed to show off the system’s Mode-7 capabilities (bending, warping, and stretching 2D sprites). What it spawned however is one of the most enjoyable co-op experiences of its generation. Sequel games would improve on the formula, adding new power-ups, new characters, new abilities, new customizations, and more, but it was this original game, with its four basic types, and eight Mario-centric characters that set the tone for arcade-racing mayhem, often imitated and rarely duplicated. 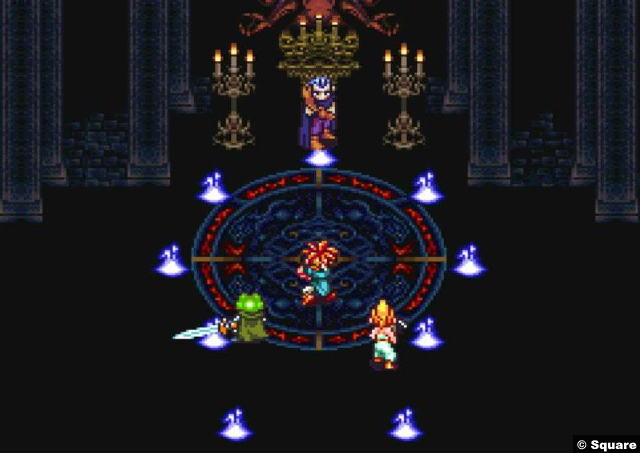 Every console generation is defined by one type of video game. It’s not necessarily a new kind of game, just one that comes into its own during that generation, or sees its definitive title (and subsequent copycats) released then, etc. In the NES era, it was the 2D action game, ala Contra. In the N64 (32/64-bit) era, it was the 3D platformer, ala Mario 64. Last generation it was the first-person shooter, ala Call of Duty. This generation it’s the open-world adventure, ala Red Dead Redemption 2. In the SNES era, it was the RPG, and the console to own if you wanted the latest and greatest Role Playing Games was the SNES. It had Final Fantasy titles, Secret of Mana titles, Earthbound, Mario RPG, Dragon Quest, Breath of Fire, Ogre Battle, Terranigma; the list is stupidly long.

How do you narrow things down to just one title? What’s the one RPG you would pick as your “desert island” game, the one you would play a hundred times with nothing else to do and never get bored of it? What one RPG defines the system of the RPG? For me, it’s Chrono Trigger. I regard it as one of the greatest games of any genre, for any console, ever made, and I think it not only exemplifies the 16-Bit JRPG style (one which is so ingrained in my generation it’s being replicated in modern titles like Octopath Traveler and Bravely Default) but also serves as sort of the closing statement on the subject.

Other big RPGs followed, notably Final Fantasy VII for the PSX, but everything changed when the genre moved to CD. That’s not a good vs bad opinion regarding the change, just an acknowledgment of the difference in the presentation: The PlayStation was almost as renowned for the RPG as the SNES, but those titles (Chrono Cross, Final Fantasy VII-IX, Xenogears, Vagrant Story, Parasite Eve) were more cinematic, more epic in the way they told their stories, taking advantage of the large storage space of a compact disc.

Chrono Trigger was made with limitations and the creators—the so-called “dream team” of director, producer, writer, artist, and musicians—pulled every rabbit out of their hat, performed every trick in the book, and squeezed every ounce of creativity and raw power out of themselves and the SNES to make it happen. The result is a game I can play a hundred times and never get bored of it. I mean the game has AT LEAST a dozen different endings and countless more combinations, times, and ways to fight the final boss. It’s an epic adventure of time travel, friendship, sacrifice, and heroism that checks every box of cliches that JRPG fans count on, while doing so in a way that was never done before and, quite frankly, has never been done since.

There are too many SNES games to list when thinking of the system’s best entries. Time does not permit long discussions that could be had about Donkey Kong Country’s revolutionary graphics, or the technical achievement that brought DOOM to the system, or to the epic Final Fantasy VI, and the meticulously crafted A Link to the Past. These are just a few of the games that defined the system, defined a video game era, and defined the word “fun” for an entire generation of kids.

Next time, we’ll look at the 16-bit music that defined that generation, taking the era of bleeps and bloops and creating synthesized soundtracks that are still beloved today…