WCW VS The World Review

First released in the UK in late 1997, WCW Vs The World was a cult favourite in the eyes of “smart” wrestling fans. You see, as well as your standard Dubbya See Dubbya stars, THQ included the likeness of many Japanese wrestlers. Because they weren’t officially licensed, these characters are given the Fire Pro treatment: Their names are altered. So, without doubt a strong roster, but does that make the game playable? 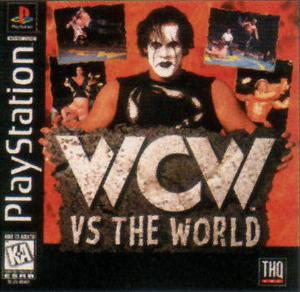 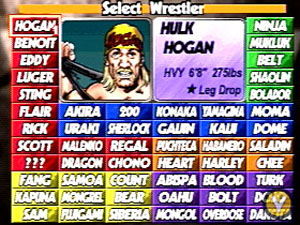 Oh dear. This isn’t a game you’d buy because it looks pretty. In fact, it looks more like the artists in this game drank their lunch, if you know what I mean. The characters look less than acceptable, due to being a bit chunky and blocky. Some of the arenas and crowds looked horrible about 5 years ago, so they’re not going to stand the test of time. Even the character select screen looks extremely unprofessional. Instead of just a photo of the wrestlers on offer, someone decided that “hilarious” cartoons should be used. But the ultimate insult comes mid-match, when you decide to move out of the ring. Then the arena, floor and ring start jumping around and changing colours. I can assure you it’s not just a faulty CD, as I’ve played 2 different copies of this game and both have the same problem. If you feel like you need to play this game, I advise playing it with your TV off. You might lose the bout, but at least you don’t have to look at a WCW Kaleidoscope of swirling colours.

This is just like any other WCW game released around this time. No WCW music, just a selection of random themes. There’s no Play By Play or crowd chants to be found either. Back then, it was accepted that music in wrestling games would be bad. However, these days the consumer demands authentic songs used in the promotion in question, as well as commentary and an active crowd. There’s none of this to be found here. What was deemed acceptable on the PSOne is now considered to be insultingly bad in 2002. 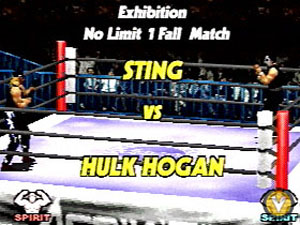 The in-game engine is a rough copy of AKI’s WCW Revenge, which was then later to be upgraded to the WWE games made by THQ. The basis of strong and weak grapples, through holding down or tapping buttons, is still one of the most popular control schemes today. However, it can be a bit of a struggle to get to grips with the control. AKI straightened out the problems in their future wrestling games, but if it weren’t for WCW Vs The World, the face of wrestling games today would be very different indeed. Overall, a promising and above-average control system.

As for the way the game plays itself, each wrestler has a wide variety of moves. There are a lot of moves used mainly in Japan in this game, which are supposedly too dangerous for American promotions which will impress Puro fans. Wrestling psychology actually comes into play here, as if you work over a certain body part constantly, you’re more likely to get the pin/submission. If you were playing this game now, you will probably enjoy playing in matches, as THQ obviously seem to have spent more time refining the gameplay itself rather than audio and visual features.

You’re certainly not going to be overwhelmed when it comes to things to do in this game. Apart from a lacklustre Career Mode (The standard AKI affair- Fight lots of matches with no storylines or angles), you can only have one on one matches. No steel cage, no tag teams, just single matches. In the Singles matches you are given a few limited options to try to sugar-coat the fact that this game has no substance. For instance, you can have a 5 on 5 Series of Single matches, or create a belt to defend against an opponent. Even back then, the lack of variety in terms of matches hurt the game a lot.

This game was released before a Create A Wrestling mode was the norm.

The roster is a Puroresu lover’s dream. NJPW, AJPW, MPW, WAR, you name it, it’s here (Apart from WWF, for obvious reasons). The only blip is that none of the characters have their proper names. But if you look closely, you’ll be able to tell your Kenta Kobashi’s from your Mitsuharu Misawas. Even up against today’s video games, you’ll have struggled to find a wrestling game that has a roster which appeals to every kind of wrestling fan.

There’s not really a lot for you to come back to. Once you’ve been every character and breezed through the disappointing career mode unlocking a few characters along the way, you’re finished with the game. You could try to get your money’s worth by fighting against a friend for some created title belts, but if anyone sees you with this game, it’s quite likely that they won’t want to be your friend anymore.

Overall (Not an average)

A very mixed bag indeed. Some parts of the game are way ahead of its time, and some sections belong back in the days of NES games. If you can put up with the poor sound, out of date graphics and lack of replayibility, you could find yourself with a rather fun game to play. Not highly recommended, but a good start from THQ.