Last week, Megan’s son contacted Cassie. He forwarded a text message that his mom had sent. Well, “text” is being generous–it was really a string of emojis. Having received a key on a puffin keychain, Cassie interprets the message, which includes a puffin-esque symbol (a penguin) to mean that Megan wants her to deliver the keychain to her in Iceland.

It’s a wild leap, but this is Cassie we’re talking about. So she jets off to Iceland with absolutely no idea of how to find Megan. And of course, she’s not the only one looking for Megan. Megan is kind of a double fugitive. Not only is the CIA after her, but she also has North Korean agents on her trail. 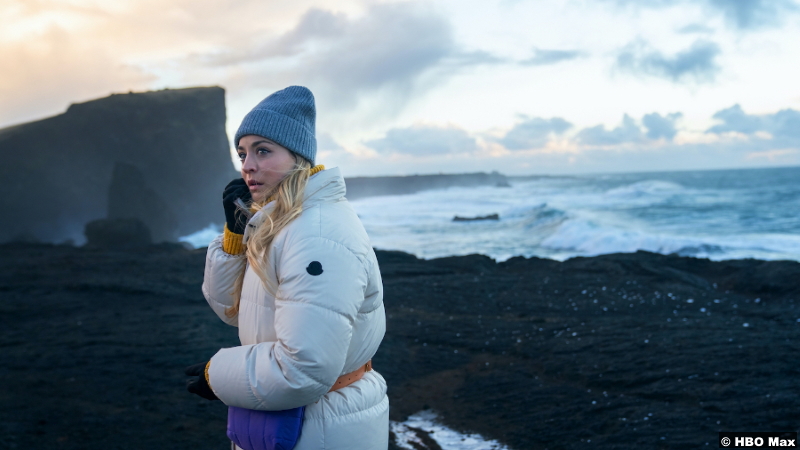 Cassie doesn’t know any North Korean spies, as far as we know. However, she does know Shane, who is, after all, the one who pulled Cassie into her new life as a CIA asset. Like her, he’s also going to Iceland under the pretense of flight attending. Honestly, with all these agents and assets onboard, it’s a wonder anyone gets their drink service.

Anyway, while Cassie bounces around Reykjavik in her inimitable, extremely obvious way, Shane seems to be shadowing her. Of course, he is. He’s actually an agent. You know, probably trained and everything. Meanwhile, Cassie is, again, very obvious. This leads her into the kind of tense yet ridiculous scenes we’ve become accustomed to seeing her endure. This time, though, it’s mostly just funny, especially when she’s pretending to be very into Icelandic delicacies, like svið, or boiled sheep’s head. 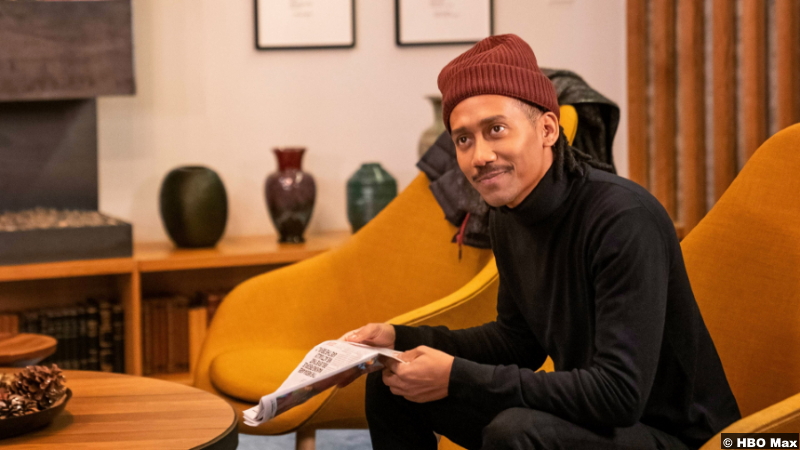 At the same time, Cassie’s trying to maintain her sobriety. It isn’t easy, though, when she’s having to search through what feels like every bar in Iceland to find Megan. Finally, she lets go and lets God, as they say, and goes to a meeting. This certainly feels like the hand of the divine at work, because another attendee is also from New York. What’s more, he mentions that he ran into a woman from Long Island there, who reminded him of home.

And how many gals from Long Island can there be in Iceland? Well, probably more than one. But the one the man directs her to is the right one. Megan is running a random bar and boy, is she shocked to see Cassie.

You see, she didn’t actually mean for her to come to Iceland. She wanted Cassie to deliver the keychain to her other friend (on Long Island). Huh. But this is a classic Cassie screw-up, so it’s not just the fact that Cassie could have led literally anyone to Megan’s doorstep. There’s also the small detail that Megan and her friend, fisherwoman Charlie, are about to poison a North Korean spy. (By the way, I introduced her as Utada last week, because that was the information at the time. Now it seems some sources have updated it to Charlie Utada.)

Now that Cassie has basically broken Megan’s cover, they have to do it now. But again, this is Cassie, so let’s go for the full screw-up. To that end, while she and Megan are hiding in the back of the bar, as Charlie serves the poisoned cocktail, Cassie’s phone starts ringing. In all this time, she hasn’t learned to silence that loud-ass ringtone that blares a snippet of Stacey Q’s “Two of Hearts.” (Between that and Exposé’s “Point of No Return” playing in Megan’s bar, it’s a pretty good time for 80s fans.) 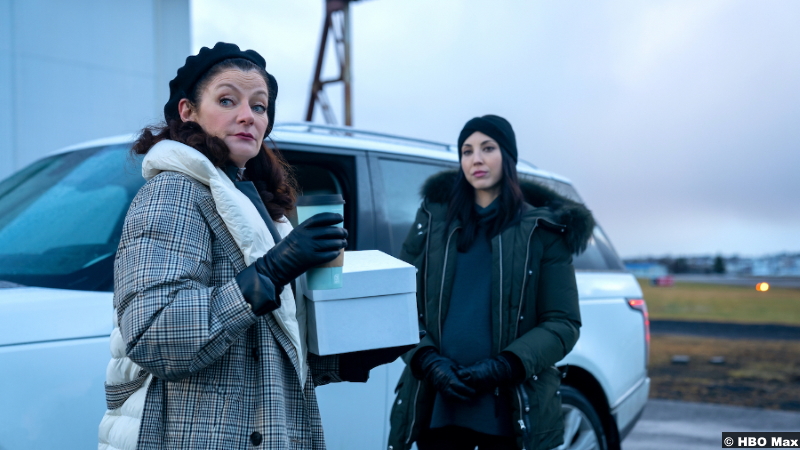 Hawk the spy is immediately suspicious and Charlie doesn’t do anything to dissuade him, like say, “Oh, that’s my phone.” Instead, it just turns into chaos. Luckily, though, Cassie had had the foresight to message a “Katherine O’Brien” for help. If you watched the first season, then you might recall that name. It’s a pseudonym used by hashtag life goals, whom you might know better as Miranda.

She’s now the boss of her own operation, when she’s not running an olive farm. Still, though, she misses the action, so that’s why she shows up for Cassie. This little jaunt rewards Miranda with a gunshot to the leg, but she still spirits them all safely out of Iceland. Megan is to stay with Cassie’s AA sponsor Brenda (Shohreh Aghdashloo) for the night, while Cassie juggles the million other things she’s got going on.

Yeah, about that. First of all, while she’s in Iceland, her credit is frozen. Seems there was a fraud alert triggered by a haul at a hardware store. To Cassie’s horror, someone uses those items after they murder two CIA operatives. They also dump the bodies at the lake Cassie, Annie, and Max found last week while combing through the View-Master clues. 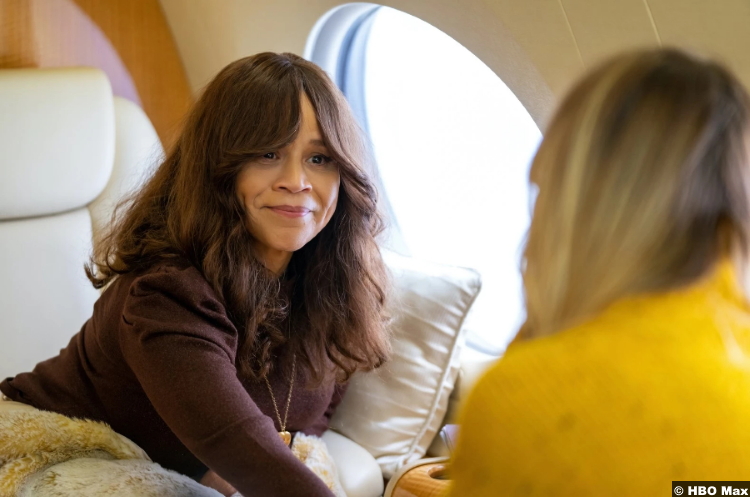 It seems as if Cassie’s doppelganger has been busy, too. And of course, Cassie has no alibi. Since she used a coworker’s seat, there’s no record of her flying to Iceland. Then she flew back on Miranda’s private plane. But we’ll put a pin in that for now, because there’s also the reveal that the View-Master slides all seem to connect to murders. There’s the lake bodies, of course. Then there’s another slide, which Annie IDs as a German license plate. The same plate, in fact, that used to be on the car that blew up.

Annie has the lightbulb moment with the license plate while she and Max are visiting his parents, whom Annie is also meeting for the first time. It’s not going well. Annie seems to be going through something in general. Maybe it was that disastrous interview last week. Maybe it’s fear over making a commitment. For this theory, I point to the not engagement ring. 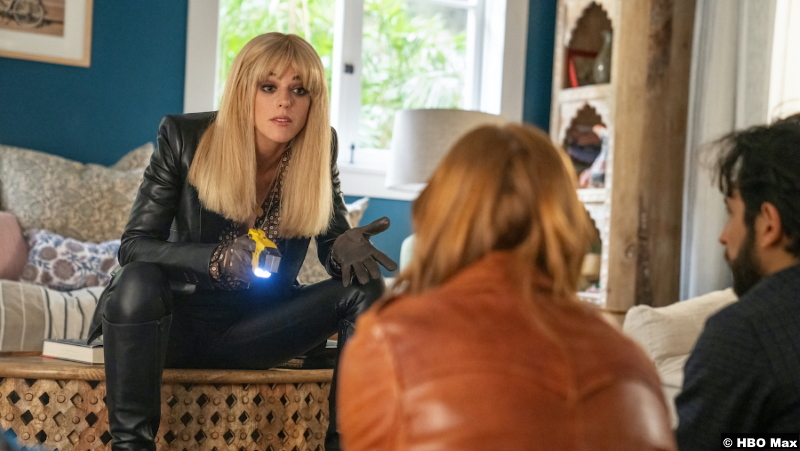 She and Max seem to be at a crossroads in their relationship, but that’s something that they’re just going to have to get back to later. That’s because the impatient criminals next door, Gabrielle and Esteban, hold them hostage for a bit. They want…something. They’re very vague, which is unfortunate for Annie and Max, because it’s hard to answer questions like “Where is it?” when you don’t have the slightest inkling as to what “it” is.

Apparently, though, they’re also hunting Megan. Nothing personal–they just want the bounty on her. And once they find an envelope from Iceland, which is where Annie and Max told them Cassie had gone, they leave, too. So they don’t seem to have anything to do with the whole doppelganger thing. So who is that? And why would they want to frame Cassie, of all people, for all this? I can’t help but think of the last time Cassie was a suspect, which makes me think of Jenny the podcaster, so interested in that story. I don’t think it’s her–she and the doppelganger appear to have different body types–but I can’t think of any other leads.

7.5/10 – Perhaps it’s because of following Cassie around or maybe it’s the scheduling–watching two episodes at once. But in any case, while still entertaining, these two episodes felt a little all over the place. On an unrelated note, yeah, I didn’t mention that Cassie cheated on Marco with HER BOSS, but like, look. I only have a certain amount of bandwidth for Cassie screw-ups and she exceeded it before then.

Fun fact: Cecilia, Miranda’s right-hand woman is actually Briana Cuoco, as in, yes, Kaley’s sister. That makes the “you look familiar” conversations between them very meta. Also, Iceland is home to the majority of the world’s Atlantic puffin population, hence the keychains.