I was excited to see the return of The Flight Attendant. I really enjoyed the first season. However, the first season draws its story from the book of the same name, and by the finale, they had exhausted the book’s story. That means that this new season is flying blind–no pun intended. I have no idea what’s going to happen and if they can pull it off. So let’s see.

Note: This and subsequent reviews will contain spoilers for both seasons. So if you haven’t seen either, you’ll probably want to get caught up first. 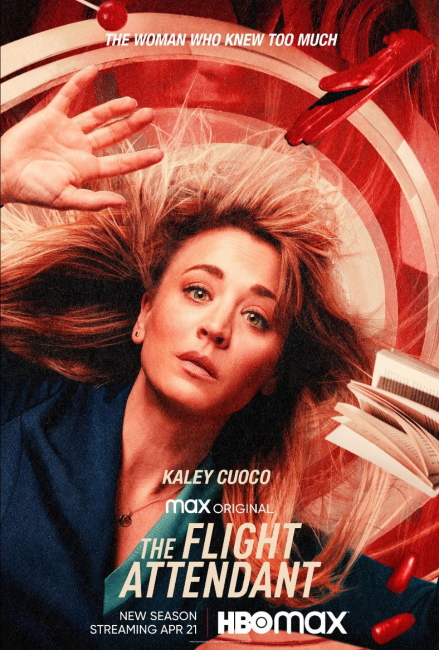 As we left Cassie in the last episode, she had not only solved the big mystery of the season–the murder of passenger Alex–but she also had a lead on a side gig. We learned in the finale that her coworker Shane was actually an undercover CIA agent. In that episode, he passed along the news that the Agency is interested in Cassie.

By the time we join her in the premiere of season 2, she’s taken the job. So far, it’s not as exciting as the phrase “CIA asset” might lead you to believe. It’s certainly not the intrigue of say, Condor. But that all changes before we even roll credits on the first episode. 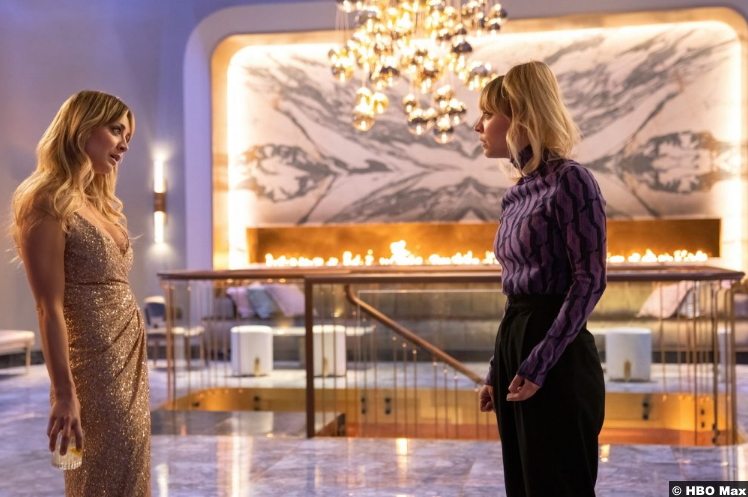 They task Cassie with going to Berlin. It’s supposed to work how it usually does. She travels to wherever–this time, Berlin–ostensibly as a flight attendant. However, once she’s in wherever, she does a little extracurricular activity for the feds. Cassie being Cassie, it doesn’t always go how the Agency would like.

If you saw season 1, for instance, then you’ll remember that Cassie was a hot mess. She’s gotten a lot better since then. She’s moved across the country to Los Angeles, where she has her own house. And as Annie, who visits her with Max, points out, it’s actually looks like a home. There are throw pillows and everything. 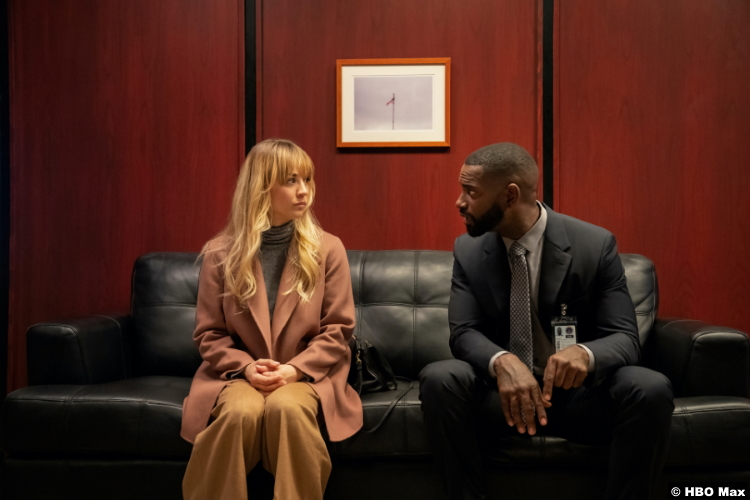 That shouldn’t be that surprising, or at least, not to us. We saw Cassie go through a lot in the first season, after all, including the realization that she didn’t have to carry the tremendous guilt she felt. In her desperate endeavors not to avoid all those dark feelings, of course, she often ended up in a bottle. Now, as we meet her, she’s almost a full year sober.

However. (There’s always a “however” with Cassie.) Despite the fact that she’s gotten her s-word together, she’s not perfect. Those who remember her often fumbling, excruciatingly awkward attempts at detective work last season will not be pleased to find out that it hasn’t really changed much. Seems as if the alcohol was only part of the issue. The rest is all her.

Her CIA handler, Benjamin Barry (Mo McRae), for example, has the air of someone who’s told her a thousand times to stop getting so involved in her tasks. Just swoop in and swoop out. Don’t, for God’s sake, wear an eye-catching coat while tailing the mark. And definitely don’t tail the mark, because that’s not your job.

Once again, though, that impulse to make the wildest, most reckless decisions is in the driver’s seat. Following the mark, with whom she’s had a full conversation btw, she sees him have sex with…herself? She never gets a good look at the woman’s face, but she’s a blonde with the same tattoo as Cassie. 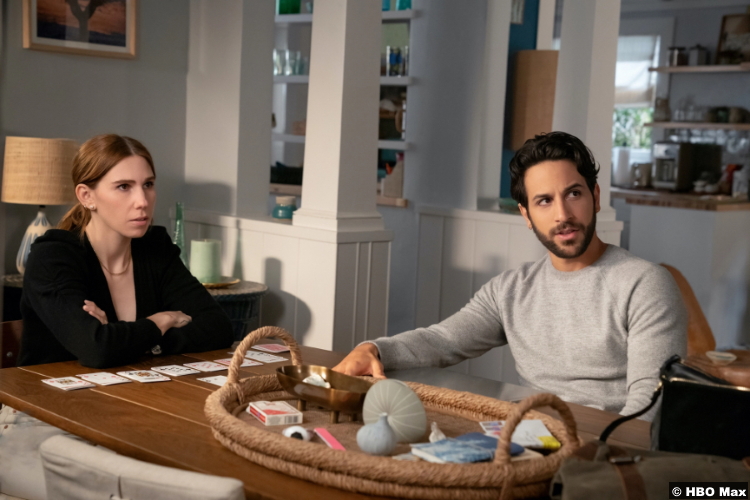 That’s the trigger then for the chaos that follows. The mark, for instance, ends up dying due to a car bomb. That almost seems like an afterthought, though, compared to everything else that’s rapidly developing around Cassie. The hotel clerks tell her that she checked out of her room. When her missing luggage is returned to her in Los Angeles, the stuff inside, like a bloody blonde wig and a Viewmaster, isn’t hers.

And not to mention, it’s very disturbing. The wig is a nonstarter, obviously, but Max immediately sets about trying to identify the images on the Viewmaster. As of the second episode, though, they haven’t gotten really far with that. Or anything else, really.

Cassie thinks that her new coworker Grace (Mae Martin) might be the culprit, especially after a few suspicious details are revealed. That seems to be a dead end as well, but there is definitely something up with Grace. Like, who is the other side of that torn photo?

Actually, I’m suspicious of everyone in Cassie’s life, outside of Max, Annie, and Davey, who’s also in town. Side note: Presumably, he’s in town to see Cassie receive her one year chip at AA, but he seems to have been there a while. He alludes to trouble with his husband, though, so I’m sure we’re going to get into it. 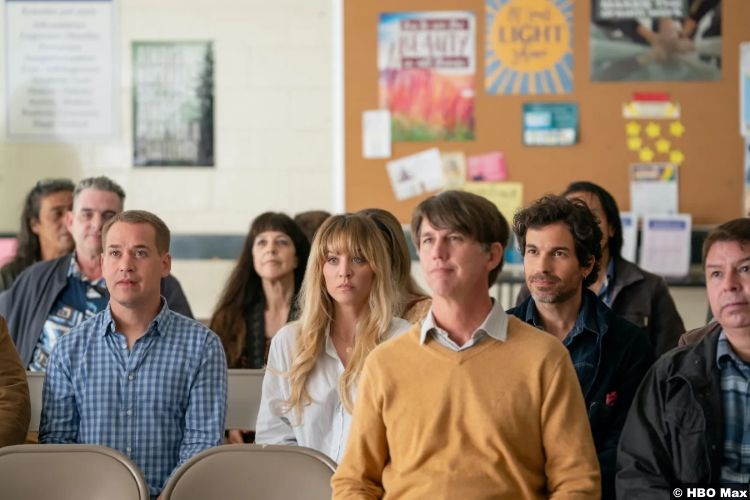 He alludes to that trouble, by the way, while having lunch with Jenny (Jessie Ennis), another member of Cassie’s AA group. To steal Annie’s phrase, which she uses to describe the way Max reacts to Cassie’s boyfriend Marco (Santiago Cabrera), Jenny has been coming in hot since we first met her. Cassie has so much else going on that she doesn’t really notice, but Jenny is intense.

She confesses to Davey at lunch that she runs a true crime podcast. The implication, of course, is that she’s cozying up to him so that she can get details of Cassie’s story. (Apparently, everyone knows now about the flight attendant and the dead body.) But as with Grace, I’m sure we’re not getting the full story.

And we definitely don’t have the full story with the couple, Esteban (Joseph Julian Sora) and Gabrielle (Callie Hernandez) Diaz. We first see them in the first episode, where they literally bump into Cassie so Esteban can clone her phone. This time, Annie and Max meet them as Esteban is trying to break into Cassie’s house.

He plays it off like he’s a confused drunk, mistaking her place for their AirBNB rental across the way. But we know better, of course. And even if we hadn’t seen the trickery in Berlin, the homeowners the Diazes have tied up in their own closet is kind of a big clue.

8/10 – Okay, so we’re obviously off to a roaring start. I wasn’t really worried as I started this season, but I did really hope they could keep up the quality of the first season. And so far, it’s working out. Although sober, Cassie is on a razor’s edge of being a human disaster at any point. But I think she likes it that way. It seems as if she’s replaced the alcohol buzz with adrenaline. That’s sure to lead her into all kinds of entertaining (and stressful) situations this season.

In other news, we haven’t seen Miranda yet, but I’ve got my fingers crossed. And Megan is still around, although we don’t know where she is or what she’s up to. She’s got a girlfriend now, though, named Utada (Margaret Cho). And I’m suspicious of her, too. Also, Alex is gone from Cassie’s mind, but now various versions of herself torment her, which is very in keeping with the season so far.

I really don’t like the way HBO (Max) schedules this how. It’s better than last time, but it’s still a lot. To that end, as far as I know, we’ll double up again, and then each subsequent week will be only one new episode. For my UK babies, I don’t know how they’ll schedule it there, but it’ll be streaming next month on Sky Max and NOW.