Trust me. We’re the good guys

The beginning of this episode is confusing.  They’re at the party from last week (episode 5 review), then they’re in line for the party, and then we’re flipping forward to a moment when Jean-Luc has been gravely injured, and then we’re with Jurati and the BQ, and…all the flashbacks and flash forwards are just…confusing. There’s a party, our heroes are there, and they’re trying to prevent Renee Picard from bailing on the Europa mission.  Highlights of this confusing jumble of scenes include the sort of flirty dialogue between Tallinn and Jean-Luc.  He’s still got Laris on the brain, and Tallinn can tell.  “Who is she?” she asks.  “No one of importance,” he responds.  “…Now I know what it looks like when you lie,” she quips.

Interesting side note: I watched this episode with the captions on, and at one point, Tallinn curses in Romulan (the captions say “speaking Romulan”). Clearly, then, there’s a connection between Tallinn and Laris. Maybe.

Raffi and Rios are quite the duo at the party – Rios enjoying the finer things about the 21st century – a book of matches, a fine cigar, and all the noise and confusion of it all.  Raffi is still traumatized by Elnor’s death, seeing a vision of him at the party, trying to cope.  Seven isn’t given much to do here other than schmooze. 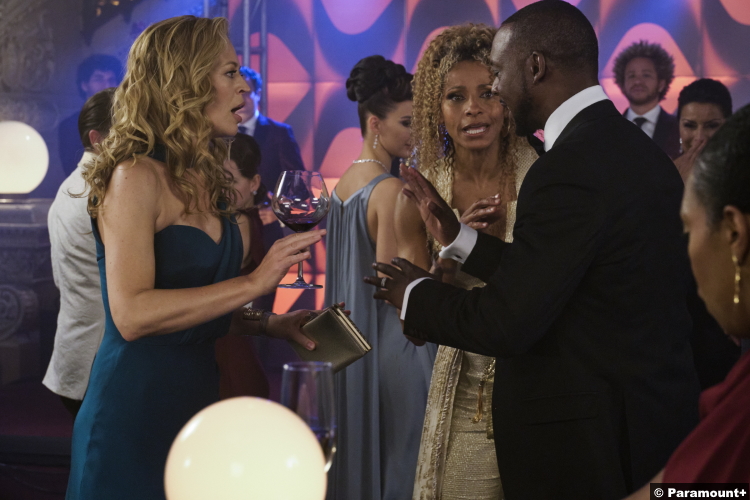 And then there’s the Agnes/Borg Queen situation.  The BQ’s nanoprobes clearly have some control over Jurati, which is established by Jurati’s escape from confinement in the security booth.  She lets the BQ have “control” and is able to break through her handcuffs like they’re paper.  Bing bang boom, she does a thing and gets the rest of our heroes into the party.

Again, these scenes are…like a shuffled deck of cards, and very hard to place in time, despite the insistent “x minutes earlier” captions when we’re jumping between scenes of the gravely injured Picard.  At the beginning of the episode it looks like they’re already in the party, and then Jurati gets them into the party, and then Picard gets injured in the future, and now we’re back to the party. 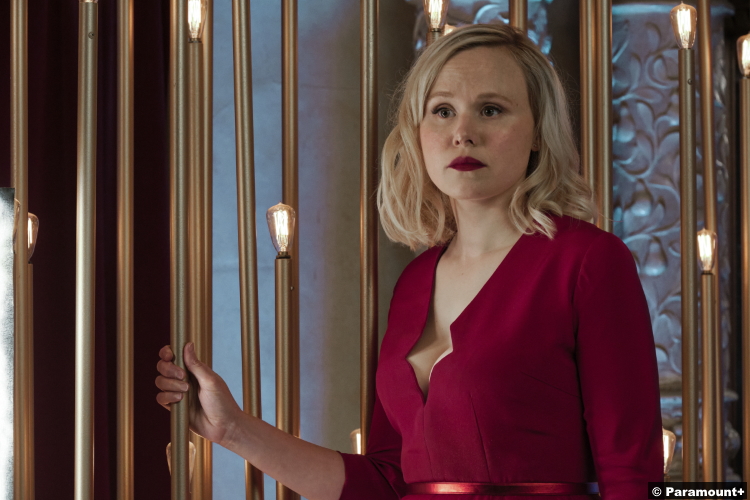 Here’s the real problem with the party scenes.  Beyond Jurati’s inner conflict with the BQ, and Jean-Luc and Tallinn’s attempts to prevent Renee from bailing on the mission, our heroes just don’t have a lot to do, and so the party is kind of an unfocused mess.

Adam Soong confronts Jean-Luc, telling him to back off – it’s a great moment of contrast between Brent Spiner and Patrick Stewart.  Spiner’s Adam Soong is a grounded, angry, menacing antagonist, a clear contrast not just to the benevolent naïveté of Data but also to the head-waggling chaotic evil of Lore, and seeing that kind of menace coming out of that face and confronting Patrick Stewart is another testament to just how amazing and versatile Brent Spiner is as an actor.

Adam Soong alerts security that Jean-Luc is “dangerous,” and the security guys do that “blocking every possible exit” move that security guys do in scenes like this.  Somehow, Jurati/BQ emits an EMP that turns the lights out, and then Jurati/BQ breaks out into song??  Ok, good distraction, but whaaaa?

Jean-Luc somehow gets ahold of a security badge, which for some reason the security guys who’d just been alerted to him just…don’t notice I guess…and Jean-Luc goes to find Renee, who’s sulking nearby.  There’s a great conversation between the two of them about the nature of fear, and it looks like he’s convinced her to stay with the mission. 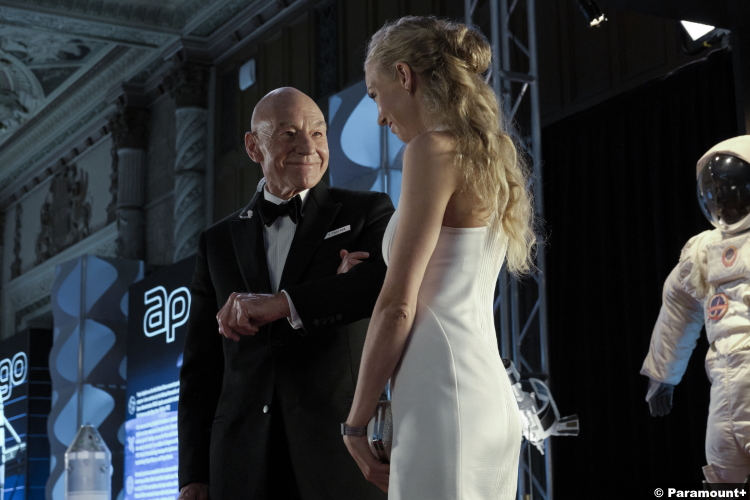 But then in yet another “show needs this to happen even if it makes no sense” moment, for some reason, the two of them have to walk outside to get back to the party.  Whaaaa?  And then Adam Soong tries to run over Renee, but Jean-Luc pushes her out of the way and gets hit himself.

None of this makes any plot sense whatsoever.

Another thing that makes no sense: for…reasons…our heroes need to take Jean-Luc not back to the ship with its 24th-century medical technology, but instead, back to the clinic where they meet with Dr. Teresa and she tries to save him.  Wha???  Rios says a line about the “bio bed” not being a “doctor” but…I don’t get it.

Of course, Jean-Luc, being a synth now, causes a defibrillator to do a sparky thing, and Dr. Teresa does the “who the hell are you people” thing that people do in scenes like this where they encounter future technology they can’t possibly understand.  Then she goes away so that our heroes can use future tech without her seeing it. 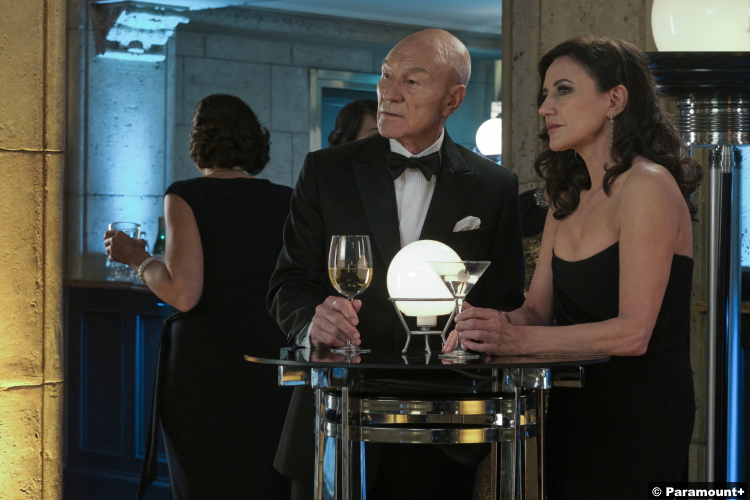 Tallinn, using a sonic screwdriver that looks identical to the one Gary Seven used in TOS – nice touch there – shows images of Picard’s brain to our heroes standing nearby.  He’s having flashbacks of his mother, and some trauma he suffered as a kid, and he can’t wake up.  The solution?  Tallinn will go into Picard’s head and try to bring him out of his coma. A very Trek solution but one we’ve seen a lot before.

And then Jurati/BQ is walking dramatically in traffic for…reasons.  The BQ appears to be fully in control of Agnes now, so we’ll see where that all goes…

6/10.  This episode was just a confusing mess full of half-ideas and nonsensical plot developments.