A look back on Battlestar Galactica’s incredible episodes and arcs

We’re looking back on the legacy and greatness of Ronald D. Moore’s reimagined Battlestar Galactica series (2003-2009). Already we’ve considered its place among the greatest sci-fi shows ever produced, as well as its continued relevance even fifteen years since it launched. Now let’s look at the episodes that comprise the show.

It’s here where I must ask you to turn away if you’ve never watched the series. 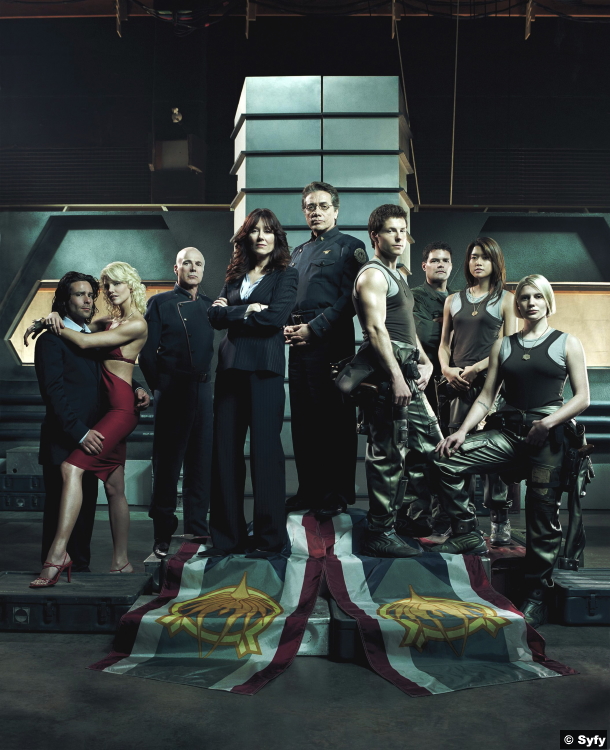 Miniseries parts one and two –  10/10 = BSG kicks off with a stunning reboot, featuring everything that would make the show-to-come great: Acting, music, gravitas, atmosphere, action, and surprises. This is how you launch a series.

Water – 9/10 = A great character study, showing us the danger lurking within the ship’s resident sleeper agent, hinting at the struggle that will come to define this character for the remainder of the series.

Bastille Day- 9/10 = Tom Zarek is introduced and will become one of the show’s most nuanced characters. The episode’s plot is fairly run of the mill, but it’s the characters that elevate it, something that will be a recurring theme during the show’s run.

Act of Contrition – 10/10 = DS9 alums Thompson & Weddle will be BSG’s version of Moore & Braga, penning some of the most memorable and best episodes, starting with this one, which mixes drama and suspense better than almost every other episode to follow.

You Can’t Go Home Again – 10/10 = The companion-episode to the previous, with another by the numbers plot (a search and rescue that seems hopeless) that is elevated by absolutely stunning performances.

Litmus – 8/10 = A weaker entry than what’s come before maybe, but I’ll say this for it: You’ll be emotionally invested, angry, and might even fist-pump. This was the episode that convinced me that BSG wouldn’t always have the most original “plots’ but it would have the best characters making the mundane into something you can’t take your eyes off. I sound like a broken record, but that’s the calling card of the show. I’ll say it again soon, I’m sure.

Six Degrees of Separation – 8/10 = Also known as the “No more Mr. Nice Gaius!” episode. An episode as tension-packed as it was humorous, and remarkably the source of both is the same plotline. The show’s ability to make you both root for Baltar to weasel out of every predicament while also loathing how he manages to pull it off is one of BSG’s underappreciated strengths.

Flesh and Bone – 9/10 = An episode that becomes more important the longer the show goes. On the first watch, it’s a very good and very creepy watch. Later, you realize how many seeds are planted here that get watered in seasons 2, 3, and 4, all the way up to the final minutes of the series.

Tigh Me Up, Tigh Me Down – 7/10 = The weakest entry of the season. Every season has one episode that just totally failed to stick the landing, but at least this one has great relevance to the series’ mythos and overall plot. The biggest detractor to the episode is the tone, which never really feels at home with the rest of the show.

Hand of God – 10/10 = One of BSG’s greatest accomplishments is how it manages to have so many episodes in the middle or later part of a season (where most shows tend to let off the gas) that would be good enough for a season finale. Hand of God is a showpiece episode for Kara, Baltar, and especially Lee. It’s also a showcase for series’ composer Bear McCreary, whose music really is the heart and soul of Battlestar Galactica.

Colonial Day – 8/10 = The thing about this episode is, 90% of its plot would have been better served being peppered throughout a bunch of episodes, instead of having to carry a whole 45-minute block of time. There’s nothing I dislike about it, but it feels like what it is: Moving pieces in place before the big season one finale.

Kobol’s Last Gleaming parts one and two – 10/10 = TNG had The Best of Both Worlds, with a cliffhanger ending that’s among the very best in TV history. Kobol’s Last Gleaming is a masterpiece of a two-parter, and its ending is breathtaking. What I love the most about it is that it’s not actually a cliffhanger. It’s a “what now?” A cliffhanger is “the character points a gun at you…the screen goes to black…to be continued…” That’s not this. BSG has a fair number of those, but not here. Here the gun isn’t just shown, it’s shot, and the show fades to black without any “to be continued,” leaving the viewer to wonder how what on earth is going to happen next…or how on earth they’re going to get out of the mess they’re in.