Star Trek Picard S02E05 Review: Fly Me To The Moon – There’s something about Agnes

I am the evolution of stardust.  I am the gentle flutter of a butterfly.  I am death, destroyer of worlds

So the woman reading the book at the end of the last episode is Jean-Luc Picard’s ancestor, Renee.  She’s an astronaut prepping for a mission to Europa, where apparently she’s destined to find a “sentient” life form on Io and bring it back to Earth, which…wibbly wobbly timey wimey Jeremy Bearimy…leads to Starfleet.  That’s as much of the puzzle as we have at the end of the episode, but it’s very interesting. 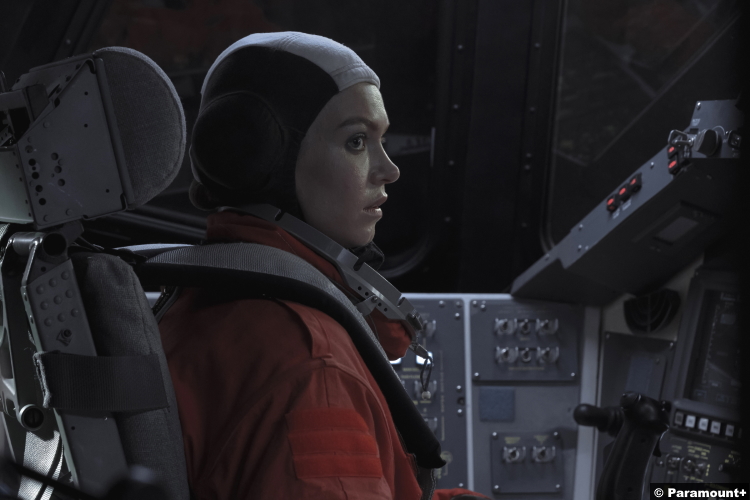 Let’s go through this middle-of-the-season episode and figure out where it leaves us.  First things first: the Watcher, played by the same actor as Laris, isn’t Laris, but is a character similar to Gary Seven, from The Original Series – someone whose job it is to protect a piece of the timeline.  This Watcher, whose name is Tallinn, is protecting Renee Picard.

The episode begins cross-fading between Jean-Luc Picard’s conversation with Tallinn and Renee crashing to her doom in a spaceship.  It’s a simulator, of course, which is pretty obvious, but it’s not badly done.  The revelation that Tallinn is protecting Renee fades us in to the theme.  If I hadn’t over-consumed a lot of media and analysis beforehand that spoiled Tallinn’s mission for me, I think it would have hit harder, but I can’t fault the episode for that.

The BQ is up to shenanigans, and trying to contact Earth’s cell phone towers.  She manages, finally, by imitating Rios’s voice, after trying everyone else’s, and lures a hapless French police officer to the scene.  Knowing a little bit about French law enforcement as I do, I’m a little confused as to why this is a Police Nationale officer rather than a simple city Gendarme, but whatever.  Also, how does the officer know where the Picard farm is if it’s abandoned and hasn’t been occupied for decades?  Again, the show says “this needs to happen, and we’ll handwave the inconveniences.”  The show does that a lot.

Seven and Raffi manage to stop the bus Rios is on with what I can only assume is an EMP.  There’s some good quippy dialogue between them as always, worries about time travel and the consequences of beaming Rios out of the bus versus trying to stop it using less temporally invasive means. 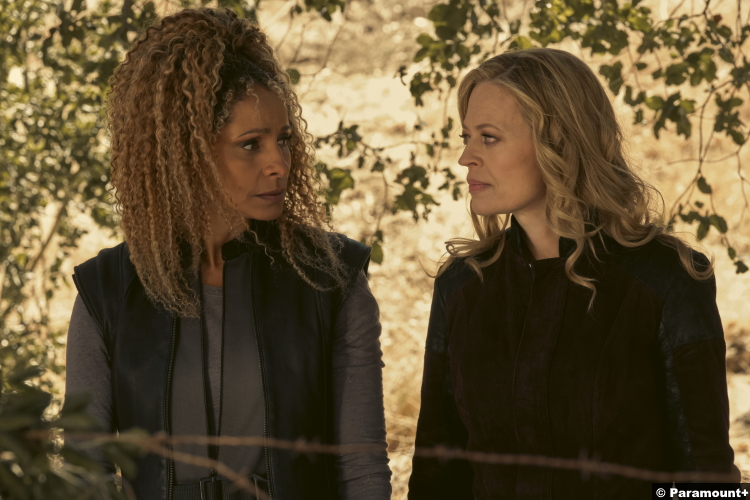 Back with Tallinn, Jean-Luc puts it all together and connects Tallinn with Gary Seven, with a quick musical sting of the TOS theme – nice touch.  Tallinn is wary and insists she can’t interfere, but she tells Jean-Luc of his ancestor’s impressive life story.  But Renee is suffering from depression and anxiety, and there’s a good chance she’s going to back out of the mission.  It’s not helped that her “therapist” is Q with a not-great French accent, and he seems to be trying to talk her out of it.

Something’s sticking in my craw here.  Renee Picard grew up in the south of France, and she clearly has a French flag on her astronaut uniform.  But…didn’t Jean-Luc just say in the last episode that the Picards were all in England at this point in history?  Am I missing something?

And then we see Brent Spiner’s character, a geneticist, Dr. Adam Soong, who is trying to convince a board to allow him to pursue genetic research to save his daughter, who has a horrific genetic condition that leaves her unable to go outside at all.  The board – which includes Lea Thompson and a possible ancestor of Worf’s human step-parents, a Dr. Rozhenko – nice touch there – is unimpressed, and says his work contravenes the “Shenzhen Convention.”  This might be a reference to the Eugenics Wars and Khan, but weirdly, it’s not something mentioned in Memory Alpha or other Trek lore repositories that I can find, so it must be a newly created thing. 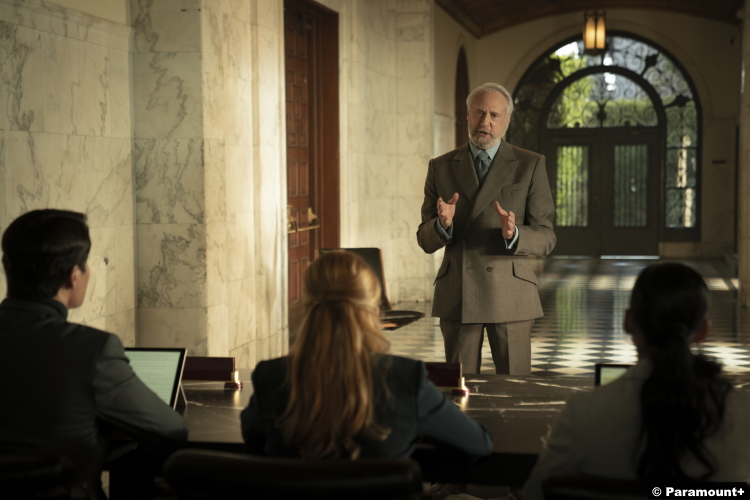 Dr. Soong is stripped of his license and funding, and the board forbids him from engaging in genetic research, so he goes home…to find a message from Q!  Q dramatically prints what amounts to a business card in a 3d printer (by the way, if you call the number, 323-634-5667, you get a cute message from Q), and Dr. Soong goes to meet with Q.

Meanwhile, our hapless French policeman, who is almost a stereotype, down to the cigarette, bumbles his way onto the La Sirena, and is immediately captured by the BQ.  Again, the show doesn’t bother with questions like “how does this 21st-century human not like totally lose his shit when he enters an alien spaceship,” preferring to move the story forward as needed while handwaving silly nuances of coherent plot.

Dr. Soong meets with Q, who basically seems to admit that he’s the one orchestrating the change in the timeline.  “I am the evolution of stardust. I am the gentle flutter of a butterfly.  I am death, destroyer of worlds.”  Butterflies again.

Q gives Dr. Soong what appears to be a cure to Dr. Soong’s daughter’s condition, and it sure seems like it is – until it isn’t.  The cure wears off, and Q is back to offer a more permanent solution – in exchange for Dr. Soong doing something to interfere with Renee Picard.  Not clear what Q intends for Dr. Soong to do here, but it’s connected to Q discovering he’s lost his powers.

The scene between Kore and Dr. Soong where he’s beaming at her and she’s learning to swim…it’s a nice moment, even if Dr. Soong’s character is…off-putting, to say the least.  The guy’s ruthless, and even in happy moments, there’s a darkness and a tension to Brent Spiner’s performance that really works.  Spiner has always been a fantastic actor, and the nuance and darkness he brings to this role is top-notch.

Jean-Luc and Tallinn figure out a plan to keep Renee on the Europa mission, which will eventually turn the episode into a heist movie.

Jurati, who was taking a nice nap on a couch while the French policeman explored the Picard estate and didn’t notice her (again, come on show – stop handwaving so much), is roused by the BQ summoning her to the ship.  She takes Chekov’s rifle off the mantelpiece (I’m referring to Anton Chekov, the 19th-century writer who said famously that if a gun is shown in the first act, it must be fired before the end of the play), and goes to confront the BQ.  The BQ tries to convince Agnes to assimilate in exchange for the cop’s life by making Agnes sad about being alone, but Agnes…shoots the BQ dead! Chekov vindicated here. 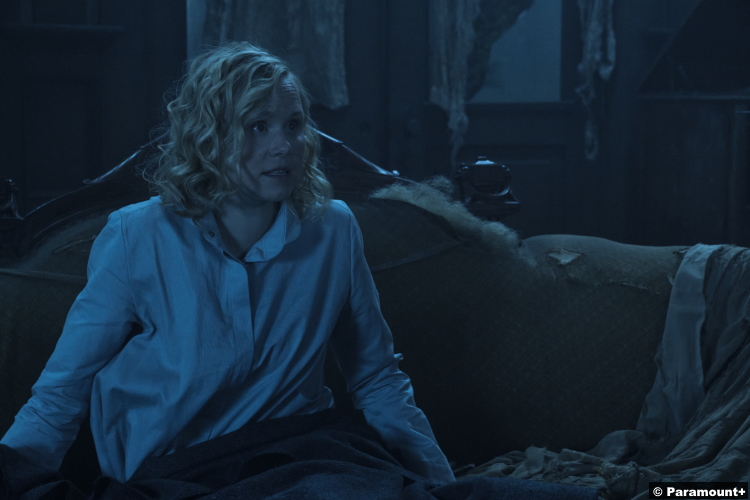 But has Agnes now killed their only way home?

Seven, Raffi, and Rios get beamed back to the La Sirena, and Agnes explains that she had no choice, that the BQ was killing the French cop.  Jurati managed to patch up the cop except for putting his spleen in a box??

Maybe this is a stretch, but “spleen” can also be a literary reference to the kind of general ennui and discontent with life that French writer Charles Baudelaire explored.  I wonder if that was an intentional reference.

So they need to get the French cop back to his car after erasing his memory, but how the hell is he going to explain to his doctor where his spleen went??

Picard and the Watcher get back to the La Sirena, and there’s a funny moment where they come in while the rest of the crew is dragging the French cop out of the ship.  “I’m sure there must be some explanation,” says Jean-Luc. 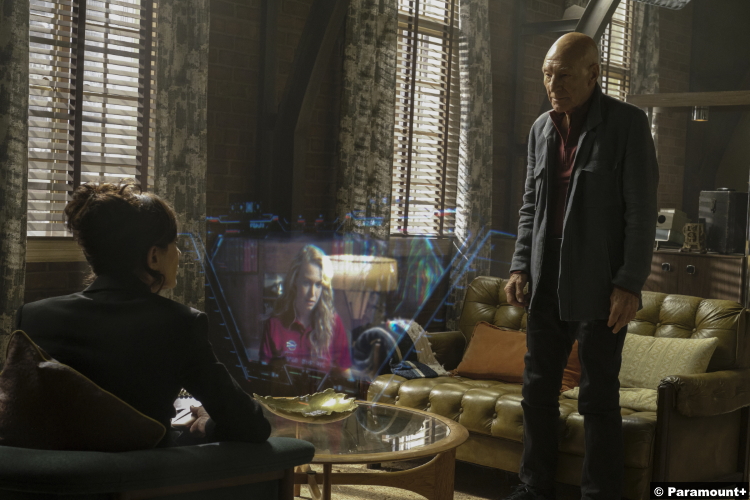 And now we get to the heist movie.  The crew has to figure out how to keep Renee from backing out of the Europa mission.

There’s a good lore moment here.  Jean-Luc says “the history of this time period is wildly incomplete,” and “the century leading up to First Contact was just rife with chaos.”  No mention of WW3 here but certainly an implication of it.

So, basically, the episode sets up an impossible puzzle box for getting into this party where they can monitor Renee and make sure she doesn’t back out of the mission, and then the show solves the puzzle box with heist movie beats and even heist movie music.  I kind of liked it.

But it’s what happens at the party that really sets up the next Big Problem for the crew.

Something’s up with Jurati, and it has to do with the Borg Queen.  It looks like the BQ might have injected Jurati with some nanoprobes before dying, and…so what’s up with that?

And what is Q playing at??

7.5/10.  A middle of the season episode with a middling plot, way too much handwaving, and a lot of unanswered questions, but I’m still very, very invested in where this is all going.