Change always comes later than we think it should

Criticism: The pre-show recaps are way too long and detailed.  I get it, let’s get to the show.

That’s not a bad thing.

Things to watch before watching this episode:

Something I didn’t notice in the last episode is that Dr. Teresa’s clinic is called “Mariposa,” Spanish for butterflies.  Remember – we have to watch out for butterflies.  Sure, the butterfly effect is kind of a cliche in time travel movies, but it just makes sense that if you’re in a time travel scenario, you’d mention it.  The idea that any change to the timeline would screw up the future is a common trope, and so it makes total sense that the characters would think about it.

Jurati and Picard trek over to an abandoned, past version of Chateau Picard, where Picard lights a fire and Jurati bustles neurotically around the place still recovering from her encounter with the Borg Queen.  And here’s where we get a pretty nifty callback.  Jurati is able to give Picard the date when the timeline changes by subconsciously choosing the number 15 in objects around the room – an abacus, an encyclopedia, a bottle of wine.  Her choosing the number 15 is reminiscent of TNG: Cause and Effect, where the Enterprise is stuck in a time loop that ends with the ship’s destruction and the death of everyone aboard.  Long story short, the solution involves subconsciously inserting the number 3 throughout the final instance of the time loop, which allows the crew to figure out that they need to choose a different option to stop the ship from being destroyed.

We also have an answer to when the crew of La Sirena landed – April 12th, so…nope, not the same date that Sisko et al were in San Francisco.  Ah well.

The scene in the chateau brings back Picard’s childhood memories, his troubled mother, Edith Piaf’s Non, Je ne regrette rien (I regret nothing, for you non-French speakers).  Part of this show’s whole remit is Picard examining and coming to terms with his own regrets. 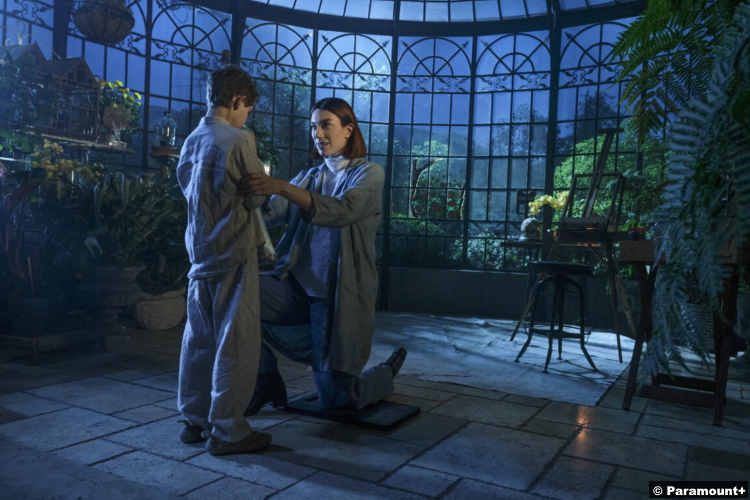 We also get a pretty big retcon/reveal/explanation/something, I’m not really sure what to call it.  The Picard family fled to England as a result of World War II, and didn’t return to France for “many generations.”  Have we finally explained why Jean-Luc Picard has a British accent??  That’s massive, and it absolutely works.  Tell me if I’m missing a piece of a puzzle here.

Meanwhile, our intrepid heroes Seven and Raffi are on a bus, and holy absolute literal shit with cheese sauce, THERE’S THE PUNK FROM STAR TREK IV.  I screamed at my TV when he showed up.  This time, the punk – yeah, played by the same guy, and playing an updated version of his “I hate you” song from the movie – singing “THIRTY-FIVE YEARS LATER, AND NOTHING MUCH HAS CHANGED…”  I’m dead, seriously…anyway, the punk is much more polite this time – no doubt he remembers being neck pinched so many years ago.  Interesting that he moved from SF to LA, but hey, a lot can happen in 30-odd years.

I just…this show.  Sometimes the grimdark infuriates me, but then the show just reminds me of how much it knows and loves Trek lore, and I’m back on board.

Raffi and Seven need to find Rios, who has been picked up by ICE, so they go to the LAPD and are roundly not helped.  Then a helpful stranger tells them that ICE detainees wouldn’t be in the system, and so Raffi and Seven have to think about plan B.  Which, at first, is to steal a police SUV’s computer, but then they end up having to steal the police SUV itself.

Rios, meanwhile, is in one of those cage gymnasiums that were so infamously called out during the Trump regime, being held with other undocumented unfortunates and waiting to be processed.  He tries to stand up for another detainee and is tased for the effort.  There’s some decent social commentary about human rights and justice, although, like a lot of the commentary in this episode, it’s very unsubtle.  In any event, Rios ends up loaded on an ICE bus headed for a Sanctuary District near the border (remember, Sanctuary Districts come from the DS9 two-parter Past Tense). 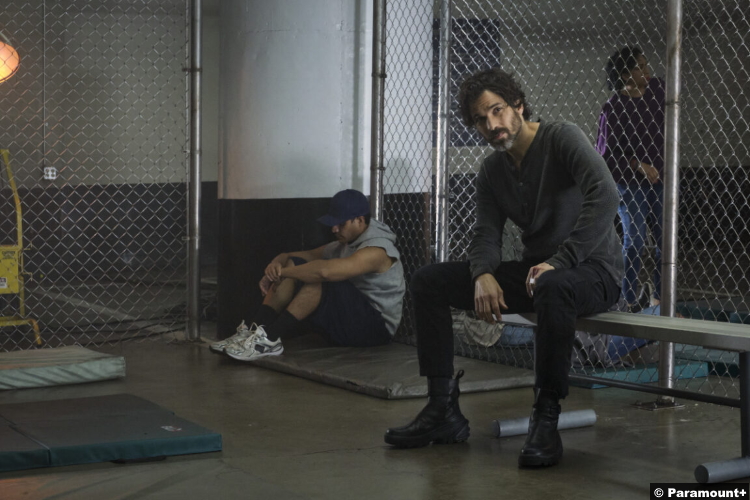 Raffi and Seven’s quippy dialogue here is adorable.  I love the chemistry between them, and I don’t even care that it makes no sense that Seven is able to just drive away with the SUV and navigate it through LA traffic for like, a while, before the cops catch up with them.  It’s another example of the show sacrificing a believable plot for character development and artificial tension-building.  In reality, the cops should have stopped them immediately, instead of letting them wreak havoc in traffic for that long – just enough time for Jurati to convince the BQ to get the transporters working.  But again, I don’t care.  Ok, I kind of care.

So the transporters are offline, which can only be fixed by Jurati once again squaring up and figuring out how to get the BQ to help.  Jurati has been absolutely brilliant this season in her interactions with the BQ – Allison Pill’s acting is top-notch, her calculating scorn and the glittering intelligence in her eyes is a great counterpoint to the “bad guy head waggling” of the BQ.  You know what I mean when I say “bad guy head waggling,” right?  How an overacting bad guy will frequently waggle their head around while they overact their explanation of why they’re evil.  The BQ does this in spades.  And once again, Jurati comes out on top – the BQ reboots the transporters because Jurati promises to let the BQ assimilate her (I think) but then Jurati brilliantly double-crosses the BQ in the end.  I loved this.

Meanwhile, Picard finds young Guinan, played to perfection here by Ito Aghayere, at her bar, 10 Forward, which young Guinan is about to close so she can leave this stinking mess of a planet.  She doesn’t remember him or knows who he is at all, which you might think runs counter to the events of Time’s Arrow, the TNG episode in which Picard first meets Guinan in the 19th century, where she’s hobnobbing with an atrocious caricature of Mark Twain.  However, as this review points out, the fact that Guinan doesn’t know who Picard is at first is actually totally in character with Q’s meddling with the timeline.  If the Federation doesn’t exist, then Picard never goes back in time to the 19th century to meet Guinan, so Guinan doesn’t know who he is in 2024. 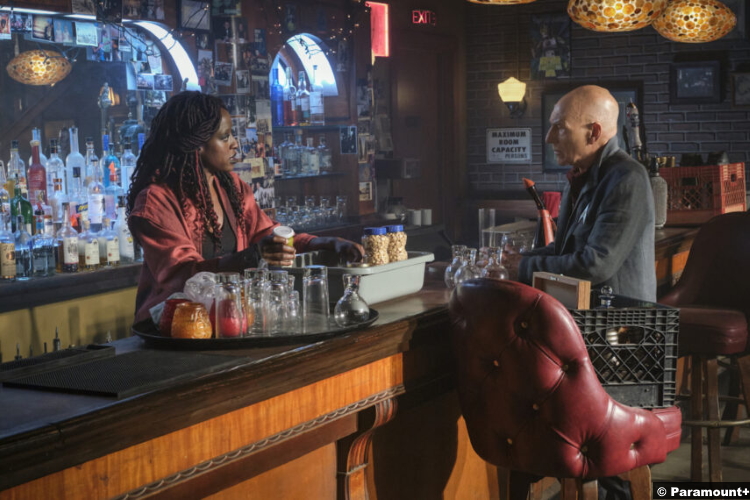 Anyway, Guinan is leaving because she’s sick of humanity’s shit, and fair enough. And Picard has a hell of a time trying to convince her that he needs her help.  He’s convinced she’s The Watcher, but as it turns out (and I pretty much figured this out immediately) she’s actually not.  However, the two of them have a good back and forth about humanity dooming the planet and how hopeless it all is.  I like this line in particular:

Guinan: This place is a pressure cooker. You know they’re actually killing the planet? Truth is whatever you want it to be. Facts aren’t even facts anymore. A few folks have enough resources to fix all the problems for the rest but they won’t because their greatest fear is having less. They got one tiny ball in the entire galaxy, and all this species want to do is fight. I’ve given them long enough.

I know that feeling, bro.  And Guinan’s grief and anger at having to give away her sweet pittie friend Luna – another Patrick Stewart foster? – is affecting and beautifully acted.

Picard finally convinces Guinan to take him to the Watcher by telling her his name, which gives her pause.  This is interesting.  Something lights up in Guinan’s expression when he says his name, and I’m sure we’ll come back to it.  Somehow, Guinan knows Picard, even with the changes in the timeline.  She takes him to meet the Watcher, who puppets a few humans to lead Picard to her, and then…it’s Laris!  The scene ends with them going through some kind of portal.

And then we see Q, monologuing about…something, and oh no, snapping his fingers doesn’t do anything!  Two lore callbacks here: Jackson Roykirk, from the TOS episode The Changeling, and Chris Brynner, the media magnate from DS9: Past Tense.  Nicely done.

9/10 –  This show continues to blow my head off with its callbacks and references, and with the way it continually recontextualizes Trek lore.  The show still tends to sacrifice coherent plot beats for artificial tension and character moments, and its social commentary, while on-point and valid, is a little bit ham-fisted. 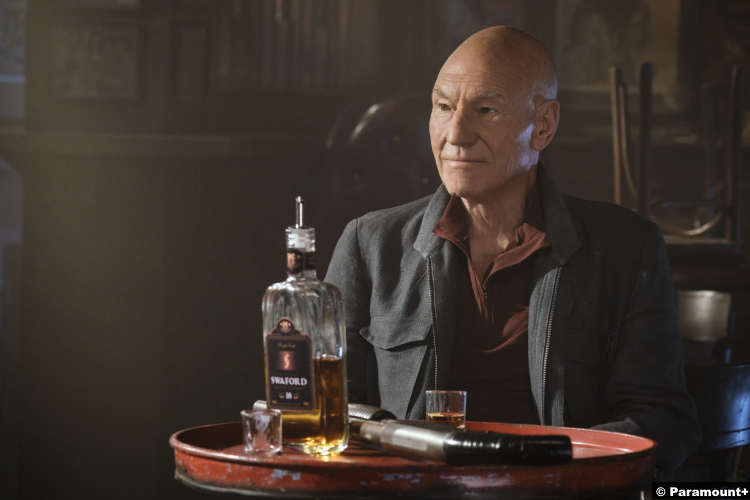