The title for the fourth episode of season four, “All Is Possible” sets a positive vibe before even starting. The episode ends, however, with the biggest surprise of the season so far. Lieutenant Sylvia Tilly resigns from service aboard the USS Discovery.

Discovery has been laying the groundwork for the character’s decision to leave the ship since the start of the season. (I’m not quite sure it’s safe to call it “a departure” just yet.) The emotional struggle Tilly suffered after Commander Nalas died in S04E01 “Kobayashi Maru” kicked it off. The show followed through with this spark of conflict in the last two episodes. Tilly questioned the fulfillment of her new position and sought new experiences to understand her feelings of incompleteness.

This character arc culminates in this week’s episode as Ship’s Counselor Culber (I enjoy getting to call him Ship’s Counselor—his subplot with Book in this episode is touching) volunteers Tilly as an instructor on a Starfleet Academy team-building mission. This exercise doesn’t get off to a good start, even before a gamma-ray burst strikes their shuttle out of space… 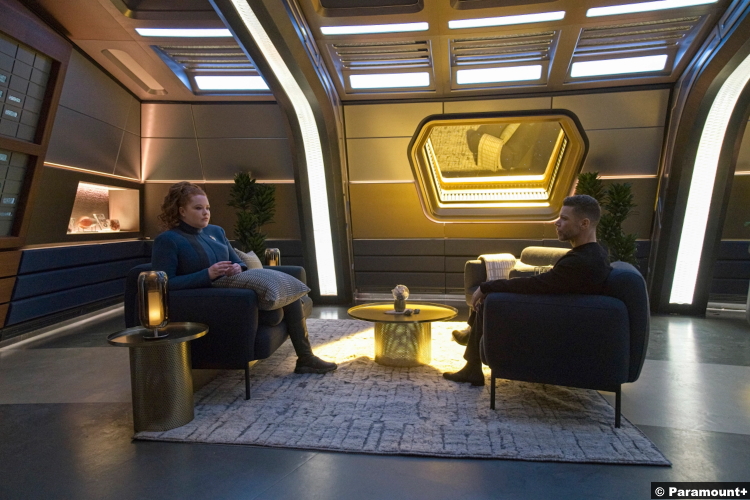 Meanwhile, President Rillak calls Captains Burnham and Saru to replace a “sick” Admiral during the final negotiations with Ni’Var President T’Rina in their Federation talks.

That was a great big laugh. As if Burnham could keep her mouth shut if things went sour. She’s technically a citizen of Ni’Var. Her mother is a Qowat Milat nun. So of course when the Ni’Var demand an “exit clause” from the Federation (Brexit vibes? Yes? No?), Burnham interrupts. Rillak gives Burnham an out-of-character dressing down, which she interprets as a plea for help.

Turns out that this tricksy part-Cardassian president was indeed banking on Burnham’s reputation to help keep the talks afloat. The captains split up, each taking on a president of their own. Saru finds out Vulcan Purists still don’t trust the Federation, and Burnham wins her chance to pitch an alternative compromise.

Of the two, Saru receives the curveball. Before the talks, a servant pours Saru Kelpien tea, with compliments of T’Rina. If that doesn’t raise your eyebrows, the subsequent scenes are rife with emotional tension. The chemistry between the actors feels natural and respects their characters’ cultures. 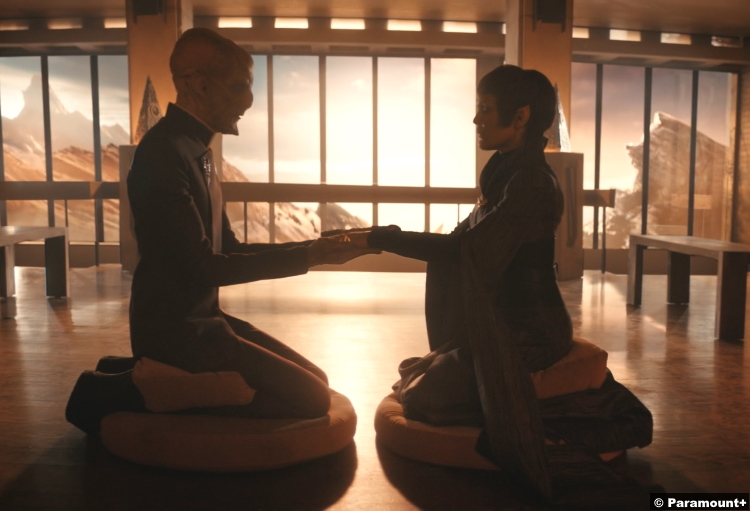 I must say, this relationship is not something I expected or even thought I wanted from this show. Though, as I made no attempt to hide in last week’s review, I would be happy for any excuse to see more of Tara Rosling’s portrayal of T’Rina. And if that means Rosling and Doug Jones continue to explore their on-screen chemistry, bring it on.

I was pretty hyped for the inner court intrigue (I love me some sci-fi politics), but the complications and resolution left me disappointed. I figured Saru or Burnham might have to enter into some sort of political debate. Or they would face conflicting but still legitimate arguments from the Vulcan Purists. Instead, they had pleasant conversations. Ni’Var accepted Burnham’s proposal and self-her appointment as their representative without rebuttal, which I found hard to swallow.

How could Starfleet be considered independent from the Federation when Burnham legit takes orders from its president? Or is she to be a part of another independent review committee? I understand I’m likely overthinking this—especially for the B plot—but I do hope further episodes flesh out this resolution.

The A-plot with Tilly also starts as the result of a Starfleet Base request. Dr. Kovich—played director David Cronenberg—is the flag officer asking for Academy volunteers. His not-so-grandfatherly presence serves to raise the stakes. Starfleet Academy has problems with its cadets. Basically, they’re a bunch of insular, self-serving xenophobes. This isn’t a simple fun outing, but “the future of the Federation” depends on Tilly’s success. She must impart her 23rd century Federation ideals to a new generation. On one mission. More responsibility, yay!

Cronenberg’s monologue delivers some pretty clear social commentary. Dr. Kovich worries socially isolated young people who have grown up disconnected from diversity cannot work together. They must learn to embrace each other’s backgrounds. The cadets don’t even talk to each other. They just work and study. Sound familiar? 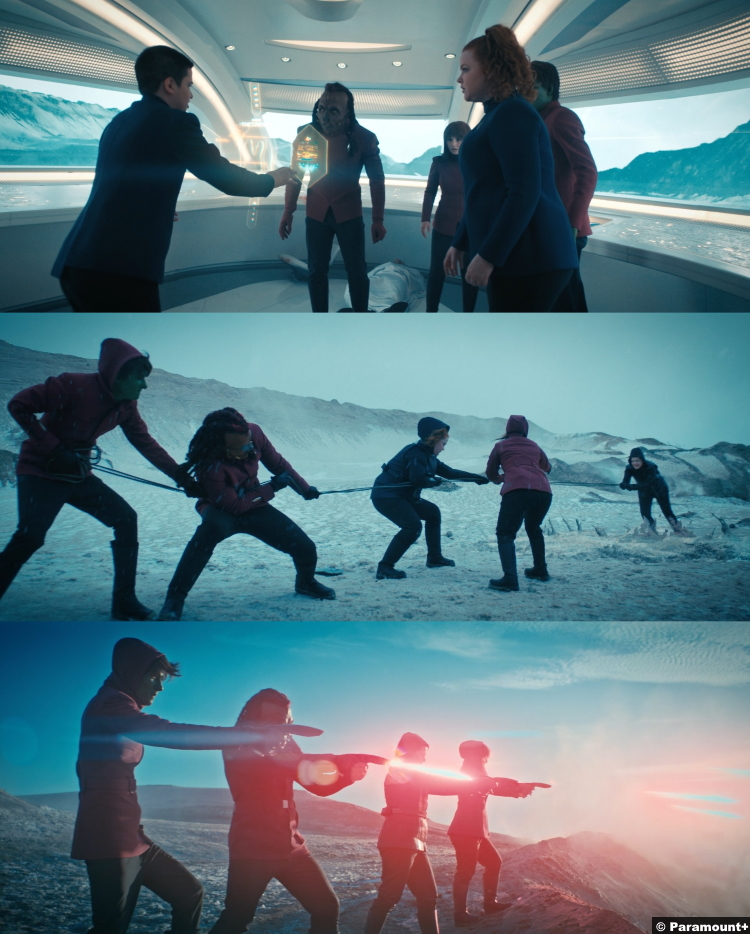 To see Starfleet cadets participating in discriminatory fear and hatred is painful. At first, Tilly’s sentimental approach appears maladapted to the task of breaking their prejudices. But when crisis strikes—killing their pilot and landing Tilly, Adira and the cadets onto a hostile ice world—Tilly goes into Capt. Killy mode. Contrary to expectations, her stern behavior only increases the tension. Tilly and Adira manage to maintain a limited amount of control in order to keep the cadets alive. Tilly only manages to break the ice (ha!) once she cuts the crap and forces them to share their backgrounds—with Adira’s equally fed-up assistance.

When Tilly hits her BS limit and acts with authority are my favorite moments for the character. So naturally, I feel disappointed she is leaving the Discovery. But I think I understand what the writers are aiming for. In this episode, Tilly talks about living through crisis after crisis, and being unable to understand what she needs to do to feel whole.

Following this, Tilly serves as the show’s proxy for the viewers. With COVID-19 variants, the climate crisis, and the litany of catastrophes in the news, it’s easy for the audience to make a comparison to their lives. Instead of giving up, Tilly turns to what she feels can make the biggest change for her inner life and for the future: to teaching.

At the time of writing, it’s unclear if Mary Wiseman, the actor portraying Tilly, is leaving the show. She may be stepping out of the spotlight, or maybe Tilly’s new role as a Starfleet Academy professor will be emphasized. In either case, I certainly hope Wiseman stays on in some capacity. Especially so if her role gives the audience an inner view of kicking these Starfleet Academy cadets into gear.

6/10 – “All Is Possible” with a bit too much ease. Burnham and Tilly resolve the petty squabbling in their plots—political and academic. And Tilly has the harder task between the two. Doug Jones and Tara Rosling’s scenes overshadow the shortcuts in the political plot. The biggest question at the end of this episode is whether or not Mary Wiseman is departing the show. 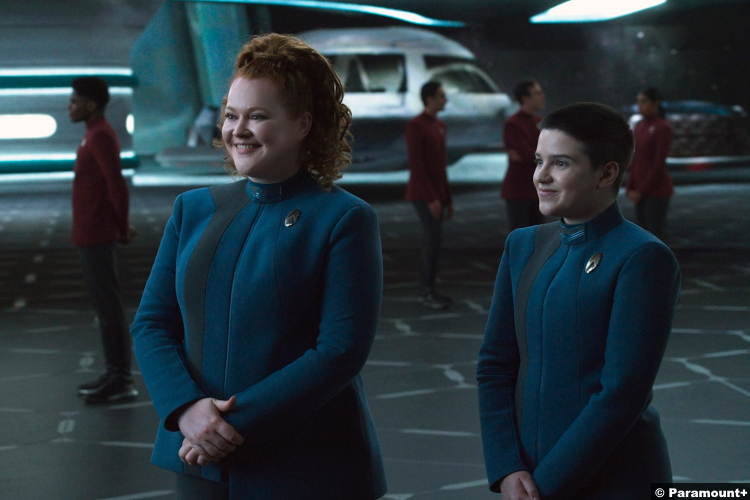